Three breakouts upslope from the stalled flow front are being closely monitored.

(ABOVE VIDEO) The Wednesday afternoon civil defense press conference, filmed by David Corrigan, edited with the most recent footage of the lava flow courtesy the County of Hawaii. (Uploading now)

This afternoon’s assessment shows that the three breakouts remain active and continue to advance These breakouts are located in the area of the cemetery below Apa’a Street; above Apa’a Street in the area west or upslope of the transfer station; and .3 miles upslope of Apa’a Street. The breakouts currently do not pose an immediate threat to area residents and will be monitored closely. The breakout near the transfer station had entered the facility rear driveway area and burning is involving the asphalt road material. All other burning with other breakouts is limited to vegetation only.

Smoke conditions are currently moderate to heavy with light trade winds blowing the smoke in a south southwest direction towards the Leilani and lower Puna areas. Smoke conditions may increase in some areas and residents down wind that may be sensitive or have respiratory problems are advised to take necessary precautions and to remain indoors. The evacuation advisory for those residents down slope of the flow will continue and residents will be kept informed of the flow status and advancement. Civil Defense personnel along with representatives of the Community Emergency Response Teams, and American Red Cross will be going door to door in the Apaʻa Street area to inform area residents of current flow conditions.

The Pahoa Village Road between Apa’a Street and the Post Office Road will remain closed and limited to area residents only. Access to the businesses and commercial areas of the Pahoa town can be made through the Pahoa Village Road at the intersection of Highways 130 and 132. We apologize for any inconvenience the road closure may be presenting with. Civil Defense and public safety personnel will be operating in the area round the clock to maintain close observations of flow activity.Hawaii County Civil Defense on Nov. 12 at 4:45 p.m. HST 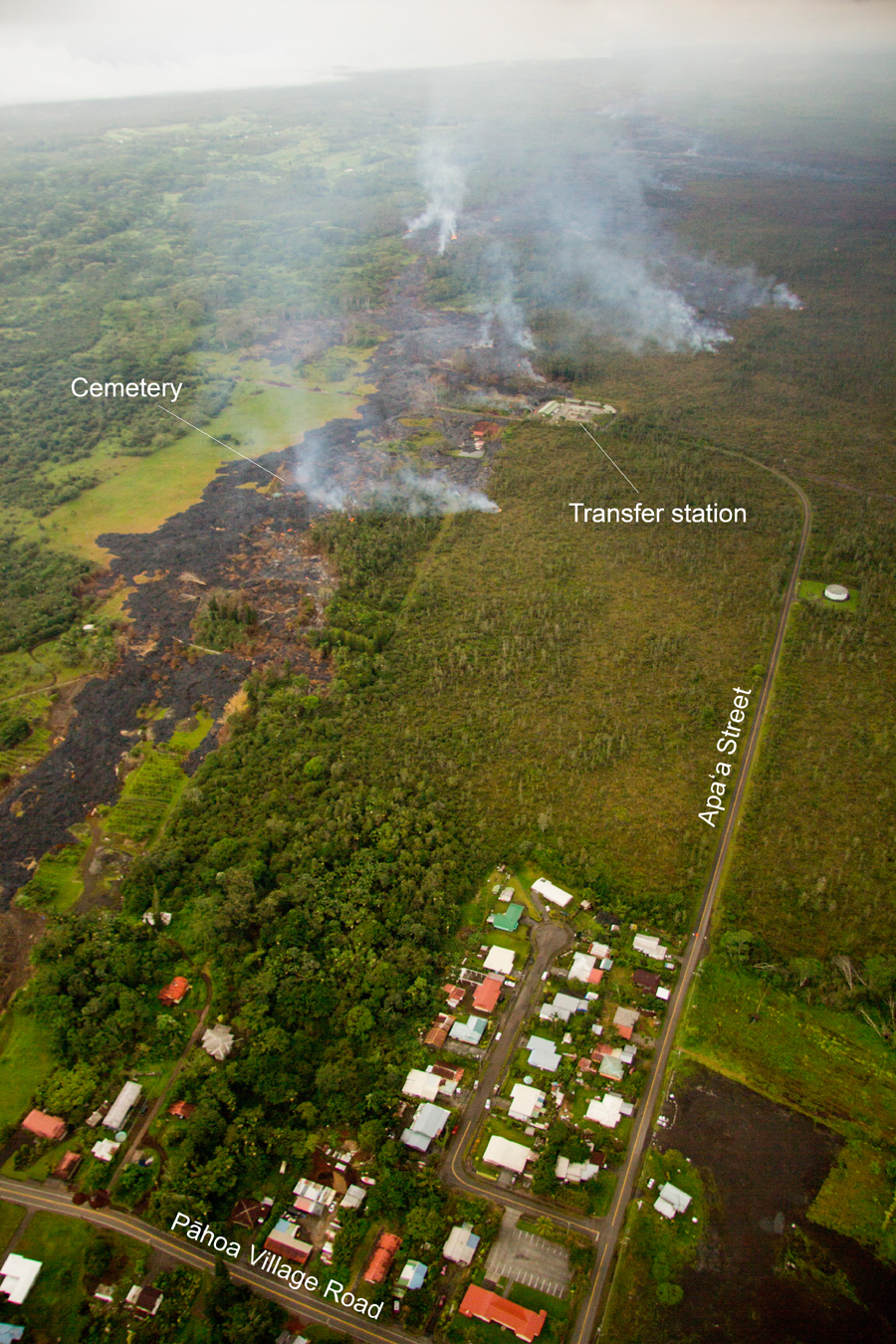 This USGS HVO photo shows the distal part of the June 27th flow looking toward the southwest. The stalled tip of the flow is barely cut off at the left side of the photo. This USGS map uses a satellite image acquired in March 2014 (provided by Digital Globe) as a base at 1:13,000 scale to show the area around the front of the June 27th lava flow. The area of the flow on November 10, 2014, at 10:45 AM is shown in pink, while widening and advancement of the flow as mapped on November 12, at 7:00 AM is shown in red. The latitude and longitude of the front of the narrow finger of lava advancing toward Pāhoa was 19.49590, -154.95256 (Decimal Degrees; WGS84). The dotted blue lines show steepest-descent paths in the area, calculated from a 1983 digital elevation model (DEM).
The tip of the flow is not active, but there are active breakouts on the north side of the flow field about 400 meters (437 yards) upslope. The flow tip is 155 meters (170 yards) from Pāhoa Village Road.
Surface activity also continues elsewhere on the flow. Surface breakouts on the north side of the flow field range from about 435 meters (475 yards) mauka to 440 meters (481 yards) makai of the Apaʻa Street. One of the breakouts is moving northeast and inside the fence of the Transfer Station. A breakout moved northward along Apaʻa street and eastward onto a property, destroyed a house, continued northeast and has reached 270 meters (295 yards) makai of Apaʻa Street. A breakout 760 meters (831 yards) mauka of Apaʻa Street has continued to move northeastward and has flowed to within 375 meters (410 yards) of Apaʻa Street. Other breakouts continued to flow on the north (2.4 kilometers; 1.5 miles) and on the south (1.2 kilometers; 0.75 miles) sides of the flow field.