Scientists survey the large breakout at Puʻu Kahaualeʻa near Puʻu ʻŌʻō, which disrupted the supply of lava in the tube downslope to Pahoa.

The USGS Hawaiian Volcano Observatory followed up on today’s Hawaii County Civil Defense report that the flow field has gone quiet in Pahoa with an extensive (and highly anticipated) investigation of the flow field closer to Pu’u O’o, the source of the June 27 lava flow. These photos were posted to the USGS HVO website on Monday evening. 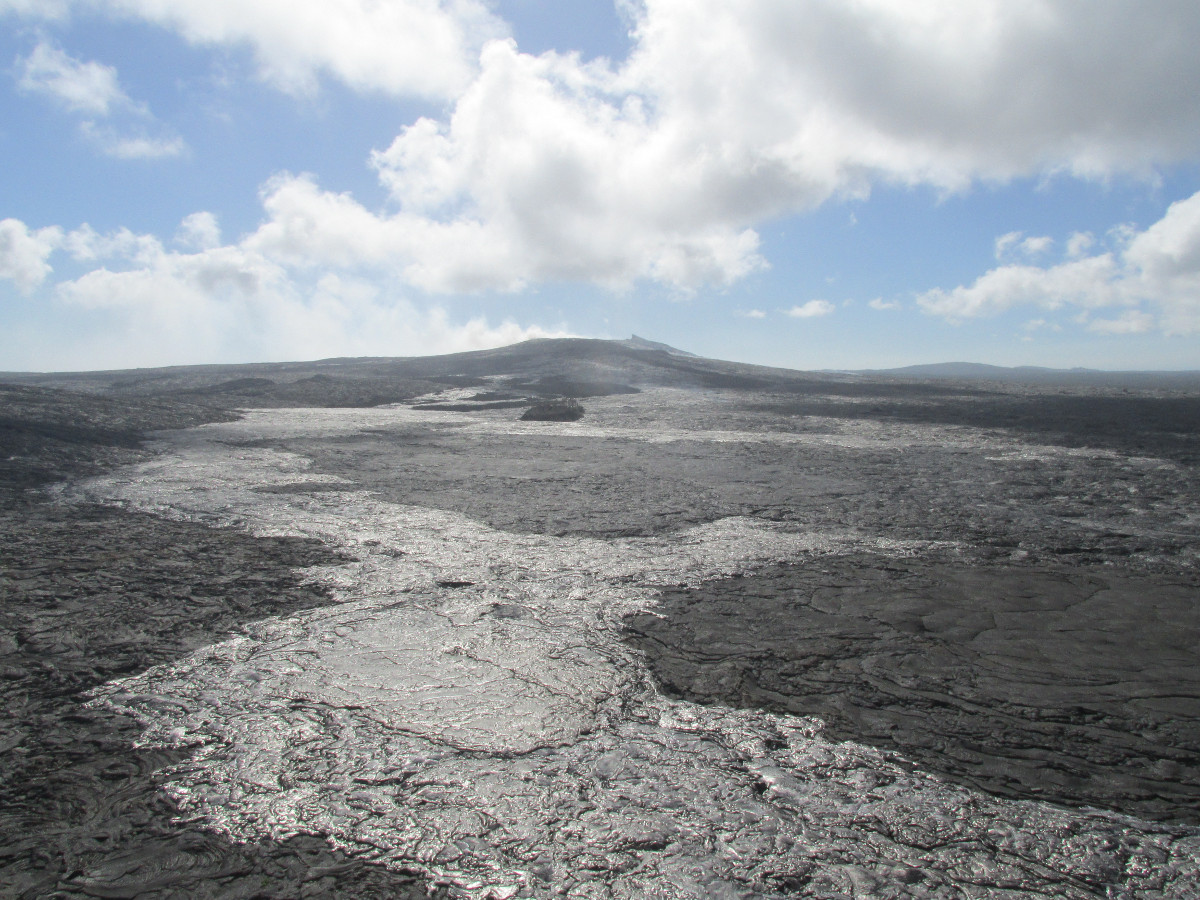 Active breakouts from tube system near Puʻu Kahaualeʻa approximately 1.8 km (1.1 mi) downslope of Puʻu ʻŌʻō. Photo is looking uprift, or toward the southwest. Puʻu ʻŌʻō is on the skyline in the middle of the photo. (Nov. 17 – USGS HVO) 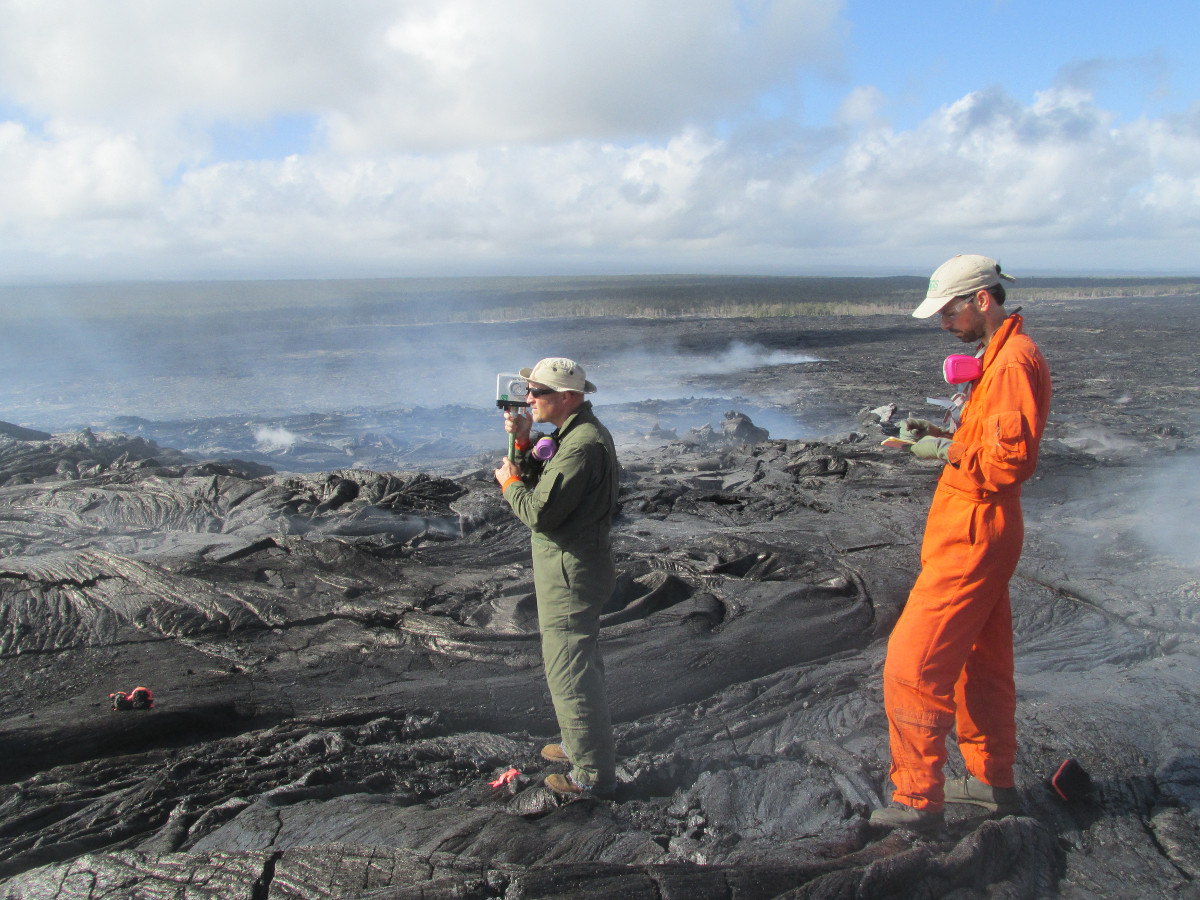 A comparison of a normal photograph with a thermal image of the new breakout near Puʻu Kahaualeʻa. The breakout consists of two separate lobes, with the longer, and more active, one traveling northeast along the base of the 2007 perched lava channel. (Nov. 17 – USGS HVO)

Thermal images from Friday (November 14) to Monday (November 17) show the decline in activity levels around the flow front over the weekend. While sluggish breakouts were observed near the cemetery in Pāhoa over the weekend, these breakouts are now inactive. Furthermore, today there were no significant surface breakouts in the area immediately upslope of Apaʻa St./Cemetery Rd. Only one tiny hotspot was visible in this area, about 1 km (0.6 miles) upslope of Cemetery Rd., which might be a single small breakout. Although activity has stalled in this portion of the June 27th lava flow, the other photos from today (see above) indicate that new breakouts are present farther upslope on the flow field. (Nov. 17 – USGS HVO)

Scientists of the USGS Hawaiian Volcano Observatory conducted an overflight of the June 27th lava flow today, November 17, 2014. They noted a marked decrease in the surface breakouts that have been active north of Kaohe Homesteads and near Apaʻa Street and the Pāhoa Japanese Cemetery during the past few weeks. Only one hot spot, suggestive of at least a very recent breakout, was identified by infrared camera in this area. It was about 1 km (0.6 miles) upslope from Apaʻa Street. The decrease in activity in this area is the result of a large breakout from the lava tube at Puʻu Kahaualeʻa near Puʻu ʻŌʻō, which began overnight on November 14–15 and caused a disruption in the supply of lava in the tube downslope.

The breakout near Puʻu Kahaulaeʻa remained active today, and scientists also observed additional breakouts from there to the crack system. A webcam showed that these other breakouts occurred progressively downslope along the lava tube since yesterday afternoon, suggesting a gradual refilling of the tube in this area. We can only wait to see how much of the tube system within and below the crack system might be reoccupied with lava.USGS Hawaiian Volcano Observatory on Nov. 17 at 9:28 p.m. HST 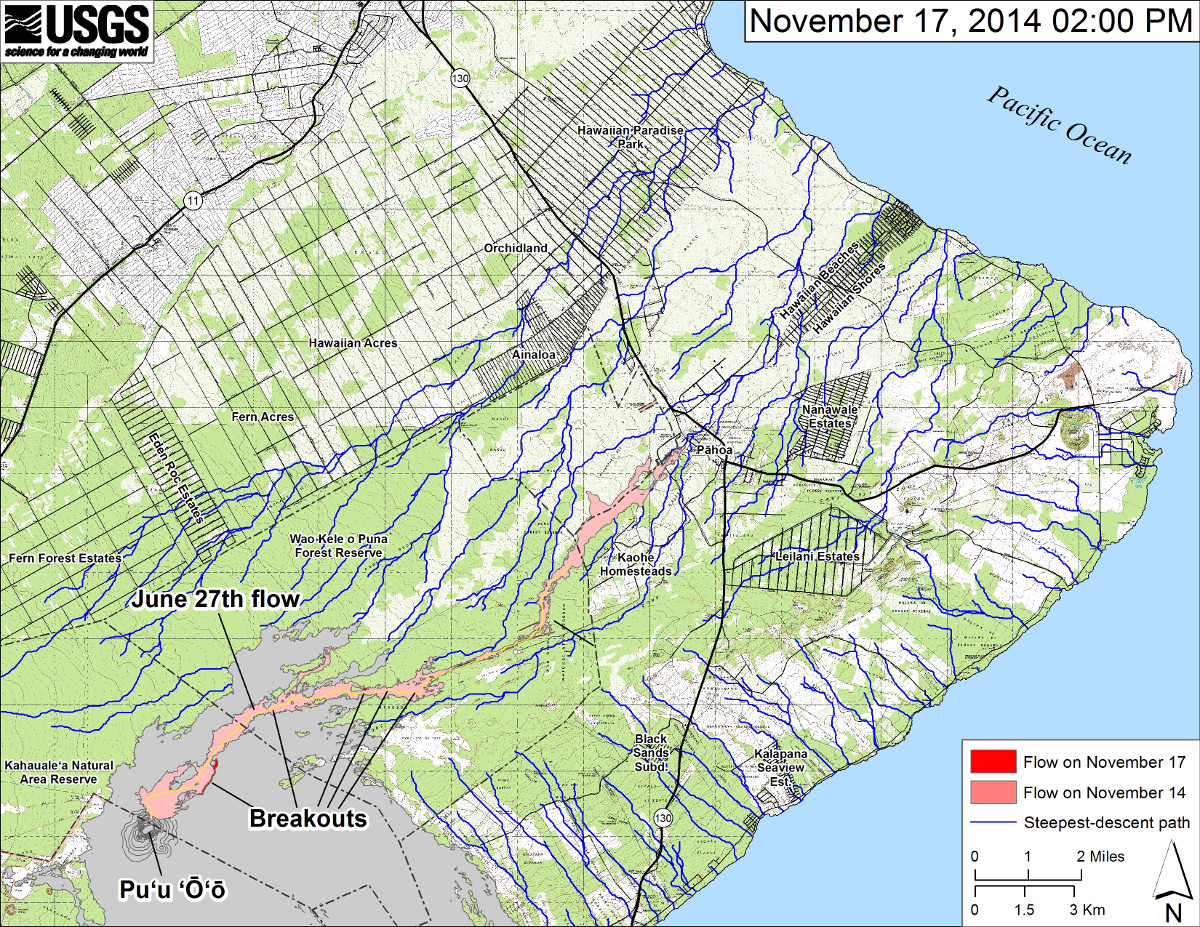 The USGS map released on November 17 returns to the small scale view and marks the numerous breakouts upslope that were observed by scientists.