The nearest lava activity to Pahoa is currently 4 miles upslope of Apa’a Street in the area of the former geothermal well pad site.

(ABOVE VIDEO) The current activity on the June 27 lava flow is discussed during Wednesday’s media conference call. Overflight video is from November 15 and 17 courtesy Mick Kalber aboard Paradise Helicopters and Ena Media Hawaii aboard Blue Hawaiian Helicopters.

This morning’s assessment continues to show very little activity along the down slope breakouts and no advancement has been noted since Saturday. Although no activity was observed downslope of the crack system, numerous surface breakouts and flows continue in the areas from the vent to the crack system indicating lava remains in the system. The nearest surface flow activity and surface breakouts are approximately 4 miles upslope of Apa’a Street in the area of the former geothermal well pad site.

The Pahoa Village Road between Apa’a Street and the Post Office Road will remain closed and limited to area residents only. Access to the businesses and commercial areas of the Pahoa town can be made through the Pahoa Village Road at the intersection of Highways 130 and 132 and the Post Office Road. We apologize for any inconvenience the road closure may be presenting with and remind everyone that the Pahoa town center and businesses are open and accessible. Every consideration is being given to the reopening of the road as soon as it is safe to do so.

Civil Defense and public safety personnel will be operating in the area round the clock to maintain close observations of flow activity. Hawaii County Civil Defense on Nov. 20 at 8:30 a.m. HST

Kīlauea Volcano continues to erupt at its summit and within its East Rift Zone. The downslope portion of the June 27th lava flow below the crack system, near Kaohe Homesteads and Pāhoa, was not active this morning, but breakouts were active in the upslope portion of the flow from within the crack system to near the base of Puʻu ʻŌʻō. Kīlauea’s summit showed an increase in the rate of deflation starting yesterday afternoon, and the level of the summit lava lake at Halemaʻumaʻu Crater lowered slightly.

June 27th Lava Flow Observations: HVO scientists were not able to conduct an overflight yesterday because of poor weather conditions, but Hawaiʻi County Civil Defense overflights yesterday afternoon and this morning found continued surface flow activity within the crack system. The lower-most of these breakouts was located north of the abandoned geothermal well site about 12 km (7.5 mi) northeast of Puʻu ʻŌʻō. Other breakouts were also active farther upslope, closer to Puʻu ʻŌʻō, based on webcam views overnight. No breakouts were observed below the crack system. Geologists are planning to investigate the lower part of the crack system on foot later today, weather permitting.

Puʻu ʻŌʻō Observations: No significant changes were noted near Puʻu ʻŌʻō. Seismic tremor continued with relatively steady amplitude, and webcams revealed no strong variations in the pattern of glow from degassing vents nor the configuration of the crater floor. The tiltmeter at Puʻu ʻŌʻō fluctuated only slightly in the past 24 hours. The GPS-measured length across the cone has not changed significantly since July. The most recent measurement of sulfur dioxide emissions from the East Rift Zone was about 250 tonnes per day on November 18, 2014.

Summit Observations: The slight rate of deflationary tilt of the past 3 days increased yesterday afternoon. The surface height of the lava lake in the Overlook vent lowered slightly. Volcanic tremor persisted at fluctuating amplitudes based on spattering activity in the lake. Small amounts of particulate material were carried aloft by the plume. Summit emissions of sulfur dioxide were measured at 4,400 tonnes/day on November 18USGS Hawaiian Volcano Observatory on Nov. 20 at 9:06 a.m. HST 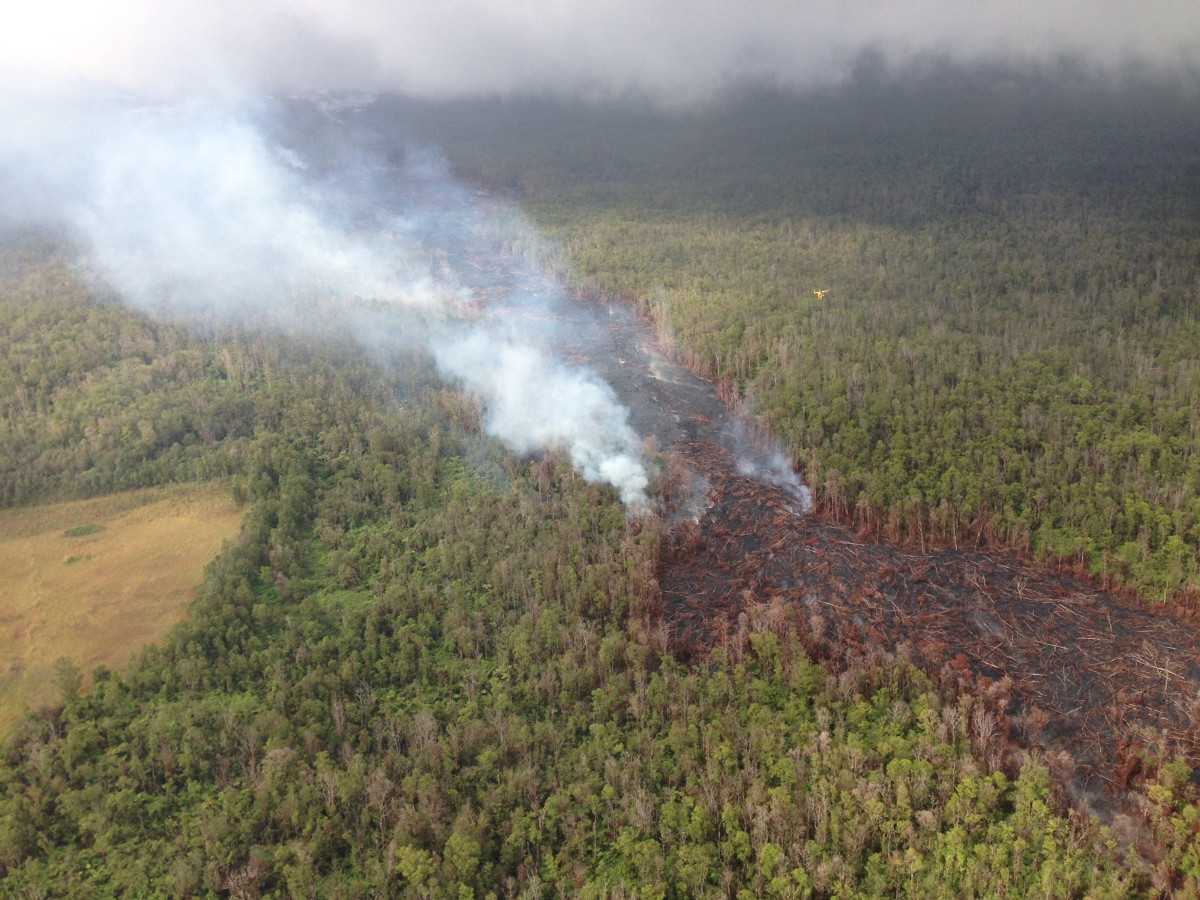 This photograph courtesy of Volcano Helicopters, taken before 11 am November 19, shows smoke from burning vegetation marking the edges of small breakouts from the June 27th lava-tube system north of the abandoned geothermal well site (middle left). This was the lowermost breakout as of Wednesday morning, located approximately 12 km (7.5 mi) straight line distance from Puʻu ʻŌʻō. Smoke and steam from breakouts upslope are also visible in the distance. Note yellow-colored helicopter for scale (middle right).