USGS does not know if the lava will re-occupy the tube downslope of the crack system, but believes Puu Oo is discharging more lava.

While the USGS does not know if the lava will re-occupy the tube downslope of the crack system (that leads towards the stalled flow front in Pahoa), Brantley said measurements indicate an increase in lava discharged from Pu’u O’o over the last few weeks. 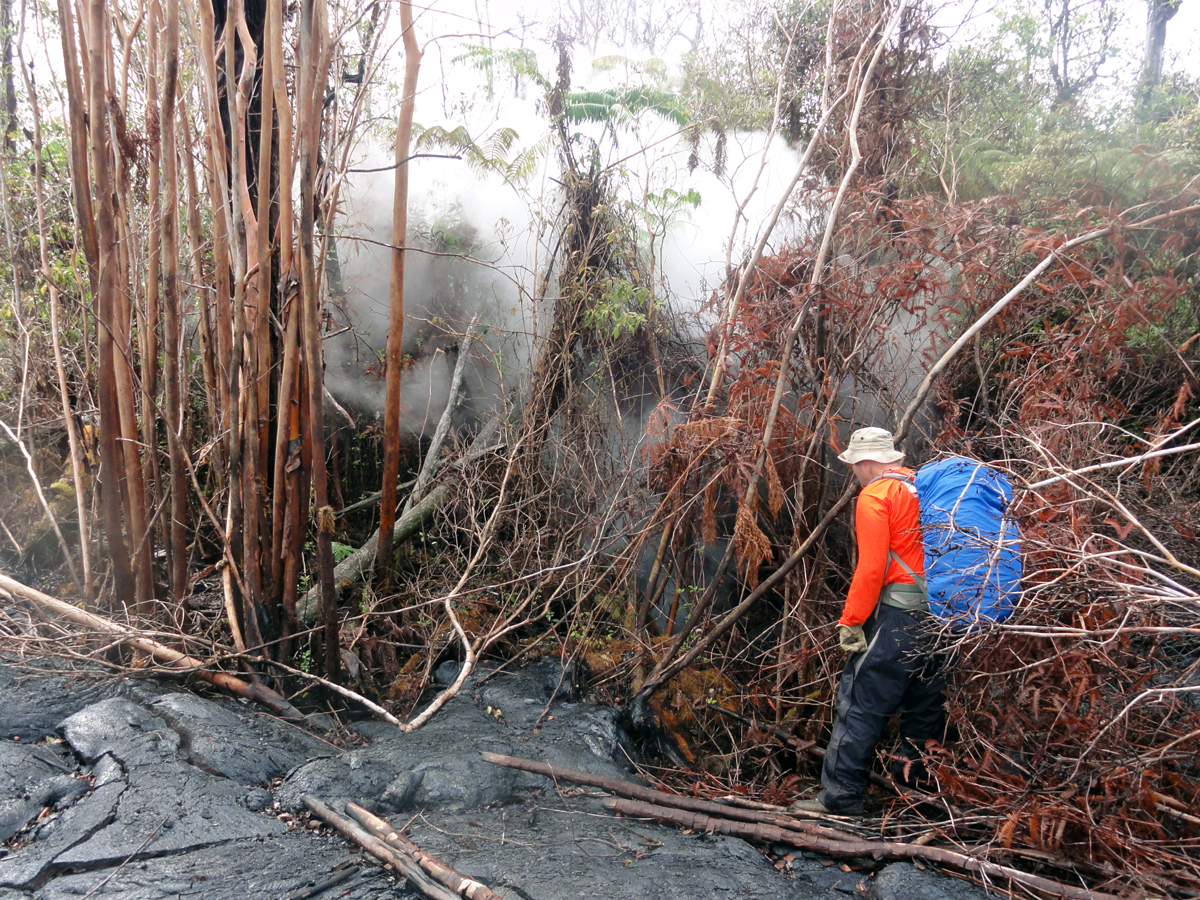 This USGS photo shows an HVO geologist examining a ground crack into which lava was pouring near the flow margin, producing large amounts of steam. (Nov. 20)

Big Island Video News will continue the tradition of including the weekly Volcano Watch article, written by the scientists of the USGS Hawaiian Volcano Observatory, to compliment the Thursday night lava presentation. This week’s article is entitled HVO Looks Ahead While There’s a Break(Out) in the Activity

HVO geologists continued to carefully monitor the flow field closer to Pāhoa in the days following Saturday’s breakout. They found that the surface flows at the lower end of the flow field, including those near Apa‘a Street, the Pāhoa Transfer Station, and the Pāhoa Buddhist cemetery, gradually became less active. By Monday morning, November 17, there was no surface activity on the flows near Pāhoa—only glowing cracks in the hardened lava. This suggested that new lava was no longer reaching the lower section of the flow field.

Upslope, however, lava continued to break out of the tube near Pu‘u Kahauale‘a. Observers on Hawai‘i County Civil Defense (HCCD) and HVO helicopter overflights on Monday found that a series of new breakouts had also begun occurring progressively farther downslope along the tube system. It is reasonable to think that these upslope breakouts had, at least temporarily, diverted lava from the tube leading toward Pāhoa.

The progression of these breakouts over time indicates that lava has been slowly reoccupying the lava tube downslope from Pu‘u Kahauale‘a. As of Thursday, November 20, the breakout farthest downslope was about 2.5 km (1.5 mi) southwest of Kaohe Homesteads.

Without lava flows posing immediate threats to the community, these recent changes have afforded us an opportunity to catch our collective breaths. The changes, however, have also ushered in a new phase of uncertainty about where these renewed surface flows will head.

Lava is currently breaking out of the tube at several locations, as well as migrating down the lava tube system. How far the lava will travel through the existing lava tube is not yet known, but based on flow activity in previous years, it is unlikely that lava will reoccupy the tube to the lowest part of the flow near Pāhoa.

The farthest point at which lava breaks out of the tube and forms a surface flow could become the new flow front in the coming days. On the other hand, any of the existing upslope breakouts, such as the one near Pu‘u Kahauale‘a, could eventually capture much or all of the lava supply and become the new active front. In either case, the new active flow front will chart its own path downslope, which may or may not follow the route that the earlier part of the June 27th lava flow followed.

New breakouts from the tube are often forced to flow along the margin of the existing flow due to that flow’s inflated and elevated surface, thereby widening the overall flow field. In some cases, this can cause the breakout of lava to head in a new direction and enter a different steepest-descent path (commonly shown by blue lines on HVO maps of the flow).

The recent upslope breakouts and subsequent interruption in lava supply to the flow front are typical aspects of pāhoehoe lava flow behavior, and the sequence is similar to events repeatedly observed for earlier flows from Pu‘u ‘Ō‘ō. Major interruptions can happen multiple times during the lifespan of an individual pāhoehoe flow.

The recent stalling of flows near Pāhoa is good news in the short term, but the ongoing breakouts from the June 27th lava tube clearly indicate that the flow is still active and remains a potential hazard to downslope communities. While it is unclear how far lava will be able to reoccupy the tube or where renewed surface flows might head, HVO and HCCD continue to monitor the flow closely with helicopter overflights, field work, satellite imagery, and other techniques.