The nearest breakout to Apa'a Street is 3.5 miles up slope, as work begins to re-open Pahoa Village Road.

(ABOVE PHOTO) This USGS Hawaiian Volcano Observatory photo shows one of many small pāhoehoe toes and surface flows noted by HVO geologists Sunday morning in the area near the crack system where lava partially filled, and flowed out of a crack, around September 6.

Here is audio from the Monday media conference call with civil defense and USGS.

Residents in the down slope areas will be kept informed of any changes and the flow status and advancement.

Smoke conditions were moderate to heavy with a light west wind pushing smoke down slope through the area of Pahoa and lower Puna. Smoke conditions may increase in some areas and residents that are sensitive or have respiratory problems are advised to take necessary precautions and to remain indoors.

The Pahoa Village Road between Apa’a Street and the Post Office Road will remain closed and limited to area residents only. Access to the businesses and commercial areas of the Pahoa town can be made through the Pahoa Village Road at the intersection of Highways 130 and 132 and the Post Office Road. We apologize for any inconvenience the road closure may be presenting with and remind everyone that the Pahoa town center and businesses are open and accessible. The reopening of the Pahoa Village Road will be initiated starting today Monday November 24th and may take a few days to complete. Utility crews will begin to remove the protection placed around the utility poles and this work will require the road to remain closed while equipment is operating in the area. 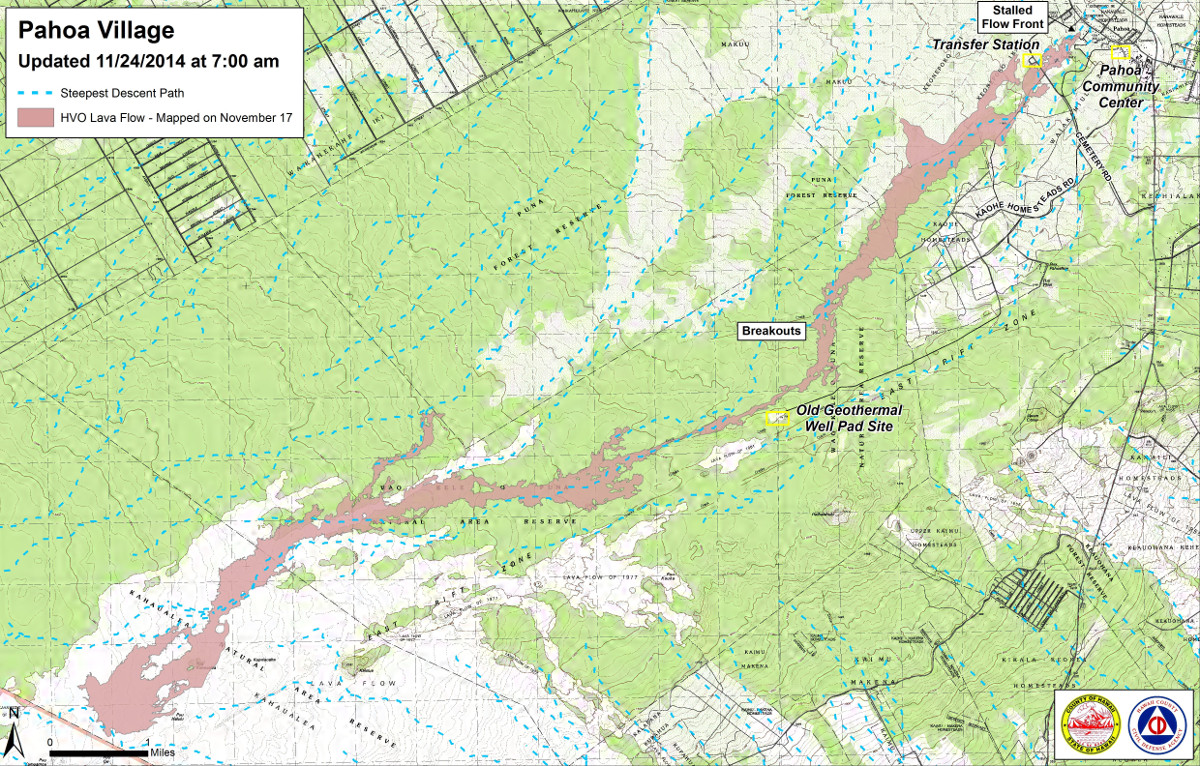 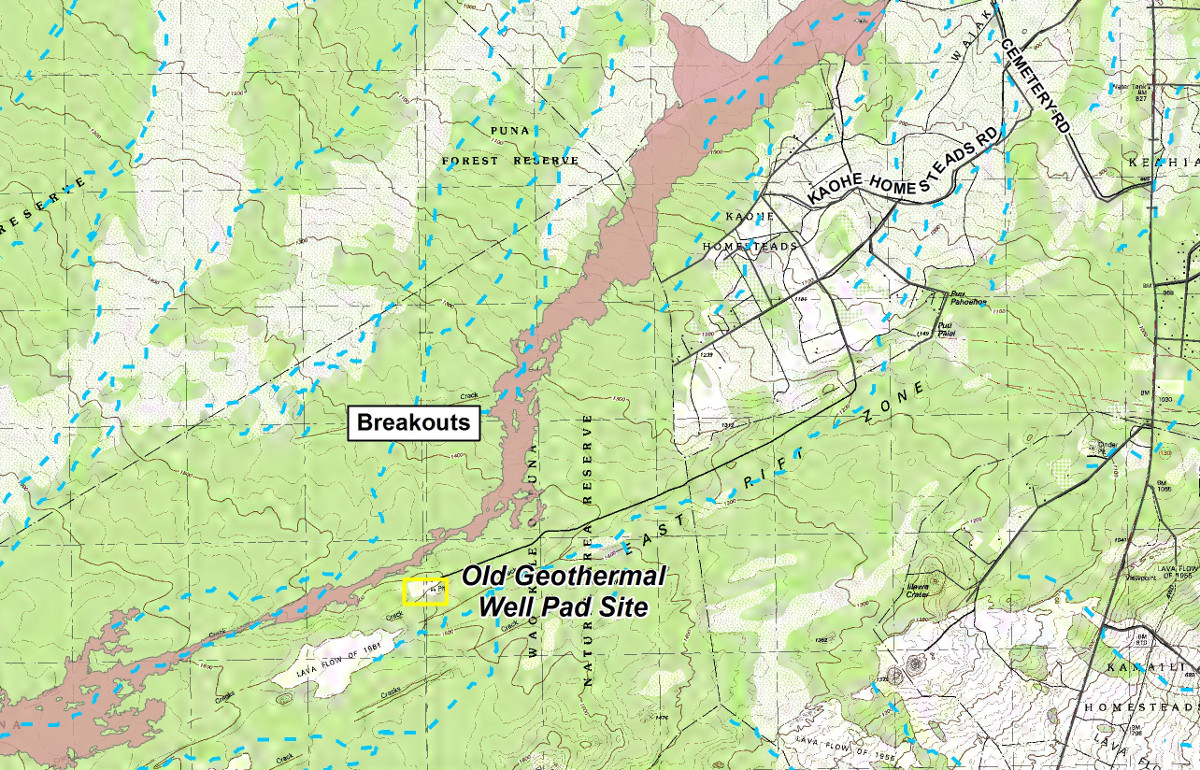 Kīlauea Volcano continues to erupt at its summit and within its East Rift Zone. Breakouts remain active in the upper part of the June 27th flow field and around the crack system near the abandoned geothermal well site. Yesterday, HVO geologists observed continued surface activity near the well site, but the breakouts appeared less active compared to the past few days. On Saturday, the front of the lowermost breakout was roughly 5.8 km (3.6 miles) upslope from Apaʻa St., as measured along a straight line. Kīlauea’s summit tilt has shown an inflationary trend for the past day, but a deflationary tilt started about 6 am. The level of the summit lava lake at Halemaʻumaʻu Crater rose slightly in the past 24 hours.

June 27th Lava Flow Observations: An overflight this morning by Hawai`i County Civil Defense showed that the lowermost breakouts remain active near the abandoned geothermal well site. There are no signs of surface-flow activity on the June 27th flow below these breakouts. Webcam images indicate breakouts are also active upslope of the crack system. The next HVO overflight is scheduled for this afternoon, weather permitting.

Puʻu ʻŌʻō Observations: No significant changes were noted near Puʻu ʻŌʻō. Seismic tremor continued with relatively steady amplitude, and webcams revealed no strong variations in the pattern of glow from degassing vents nor the configuration of the crater floor. The tiltmeter at Puʻu ʻŌʻō showed little change in past 24 hours with no clear trend. The GPS-measured length across the cone has not changed significantly since July. The most recent measurement of sulfur dioxide emissions from the East Rift Zone was about 250 tonnes per day on November 18, 2014.

Summit Observations: During the past 24 hours the summit tiltmeter showed a steady inflationary tilt that reversed to a deflationary trend starting about 6 am. The surface height of the lava lake in the Overlook vent rose slightly since yesterday morning. Volcanic tremor persisted at fluctuating amplitudes based on spattering activity in the lake. Small amounts of particulate material were carried aloft by the plume. Summit emissions of sulfur dioxide were measured at 4,400 tonnes/day on November 18 (see caveat below). USGS Hawaiian Volcano Observatory on Nov. 24 at 8:33 a.m. HST