Lava has advanced 420 yards since yesterday and is now 2.5 miles upslope of Highway 130 / Pahoa Village Road.

(ABOVE PHOTO) Civil Defense photo from this morning’s overflight.

This morning’s assessment shows that the new flow front continues to show signs of advancement and widening. The active flow front is located approximately 2.5 miles upslope of the Highway 130 and Pahoa Village Road intersection. The flow had advanced approximately 420 yards since yesterday. Current activity does not pose an immediate threat to area communities and Civil Defense and Hawaiian Volcano Observatory personnel are maintaining close observations of flow activity. Residents down slope will be kept informed of any changes in flow activity, advancement, and status.

Smoke conditions were moderate to heavy this morning in the immediate area and down through the Kaohe, Leilani, Nanawale, and other lower Puna areas to the southeast of the flow. Smoke conditions may increase in some areas and residents that may be sensitive or have respiratory problems are advised to take precautions and to remain indoors.

Once again we would like to thank everyone for your patience and understanding and your cooperation and assistance is greatly appreciated. Hawaii County Civil Defense on Dec. 3 at 7:45 a.m. HST 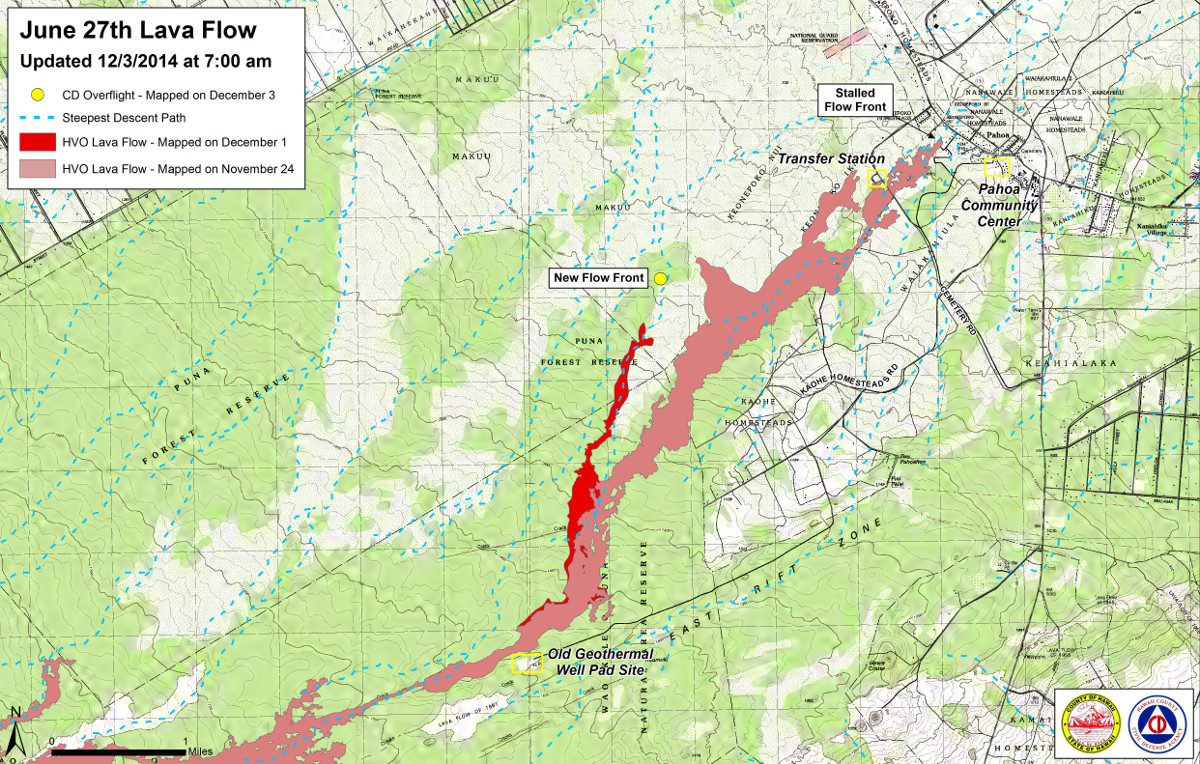 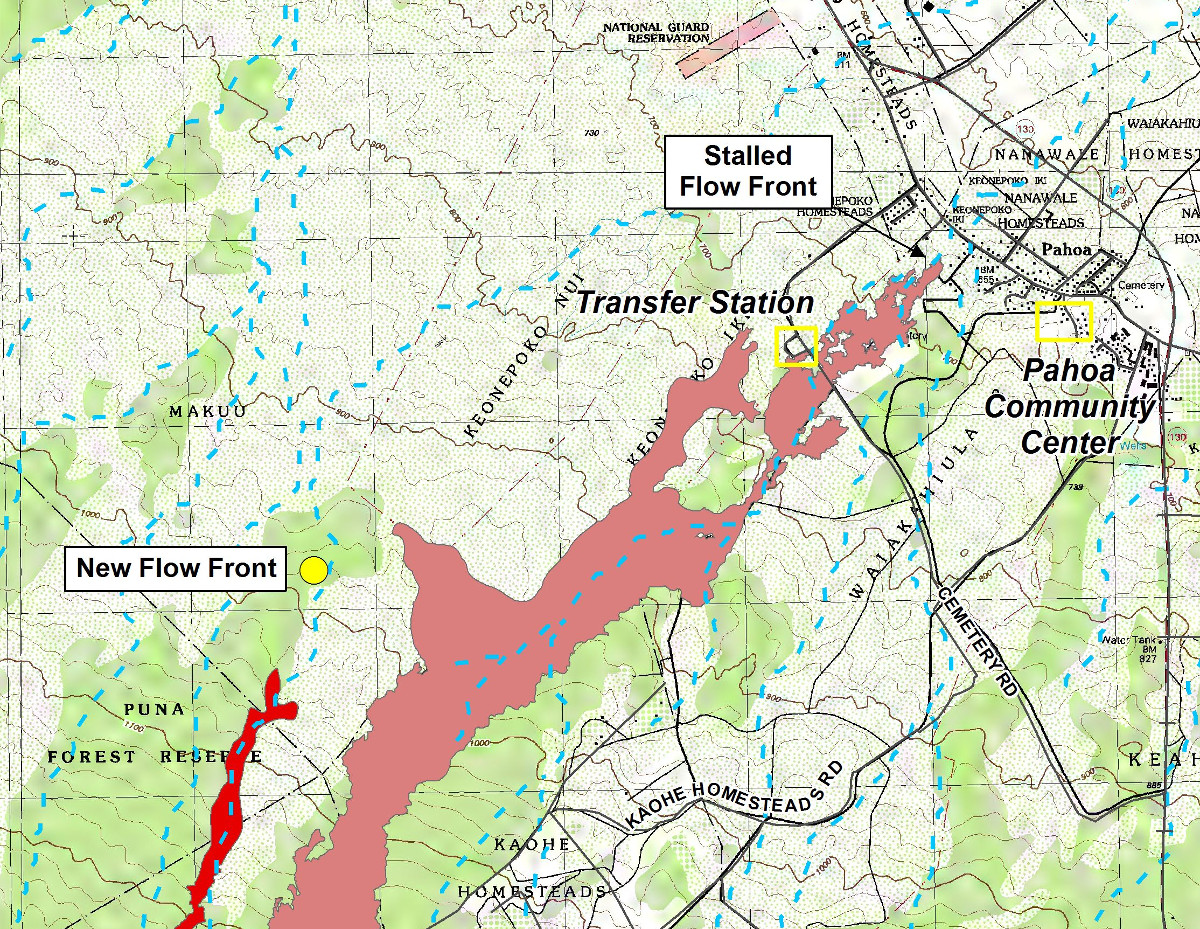 Kīlauea Volcano continues to erupt at its summit and within its East Rift Zone. A finger of lava has broken away from the west edge of the flow field below the crack system continued to move to the north. The leading edge of this finger is approximately 4 km (2.5 miles) above the intersection of Pāhoa Village Road and Highway 130, near the Pahoa Marketplace. At the summit there was a brief period of inflation followed by deflation, which continues.

June 27th Lava Flow Observations: HVO is monitoring a narrow finger of lava that has broken away from the west edge of the flow field below the crack system and that is moving to the north at rates of several hundred meters per day. Webcam imagery of smoke from burning vegetation at the flow front indicates that the flow continues to advance and satellite imagery from the morning of December 3 located the leading edge as being approximately 4 km (2.5 mi) above the intersection of Pāhoa Village Road and Highway 130, near the Pahoa Marketplace. The flow front position is essentially the same as that reported by Civil Defense overflight Wednesday morning. The flow is approximately 500 m from a point where several lines of steepest descent nearly converge due to flat topography. Until the flow passes this area of flat topography, the future flow path is uncertain.

Puʻu ʻŌʻō Observations: Deflation of Puʻu ʻŌʻō continues, presumably as a consequence of the DI event that is ongoing at the summit. A minor inflection in tilt is correlated with rainfall at Puʻu ʻŌʻō. All other monitoring data indicate no significant changes at Puʻu ʻŌʻō. Seismic tremor is low and steady, and webcams revealed no strong variations in the pattern of glow from degassing vents or the configuration of the crater floor. GPS-measured deformation across the cone has shown neither extension nor contraction since July. The most recent measurement of sulfur dioxide emissions from the East Rift Zone was about 250 tonnes per day on November 26, 2014.

Summit Observations: DI deflation changed to inflation in the afternoon of December 2. Inflation only amounted to about 1 microradian before deflation began at about 3 AM on December 3. The summit lava lake showed the usual fluctuations associated with changes in spattering behavior, which are also manifested as variations in tremor amplitudes. Small amounts of particulate material were carried aloft by the plume. The average emission rate of sulfur dioxide was 6,900 tonnes/day for the week ending on November 25USGS Hawaiian Volcano Observatory on Dec. 3 at 8:45 a.m. HST 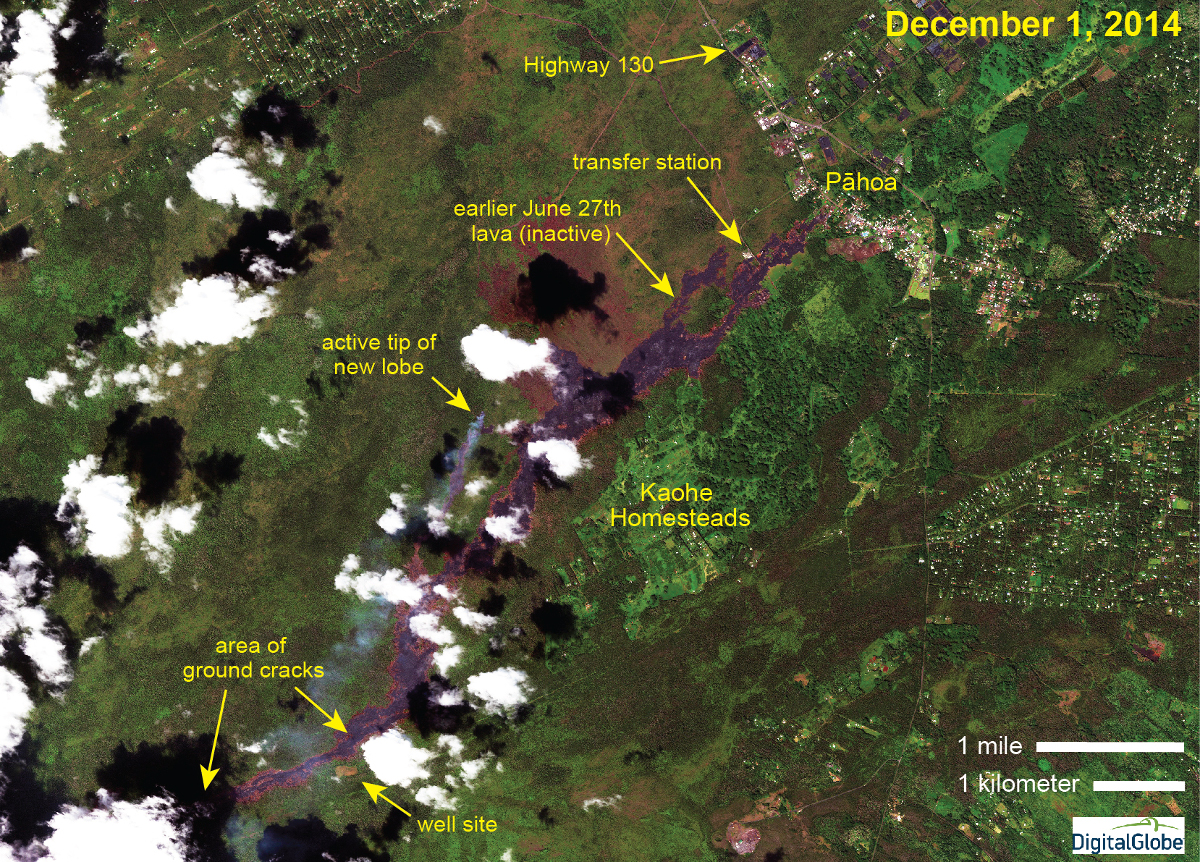