(ABOVE PHOTO) Photo taken during this morning’s Civil Defense overflight. 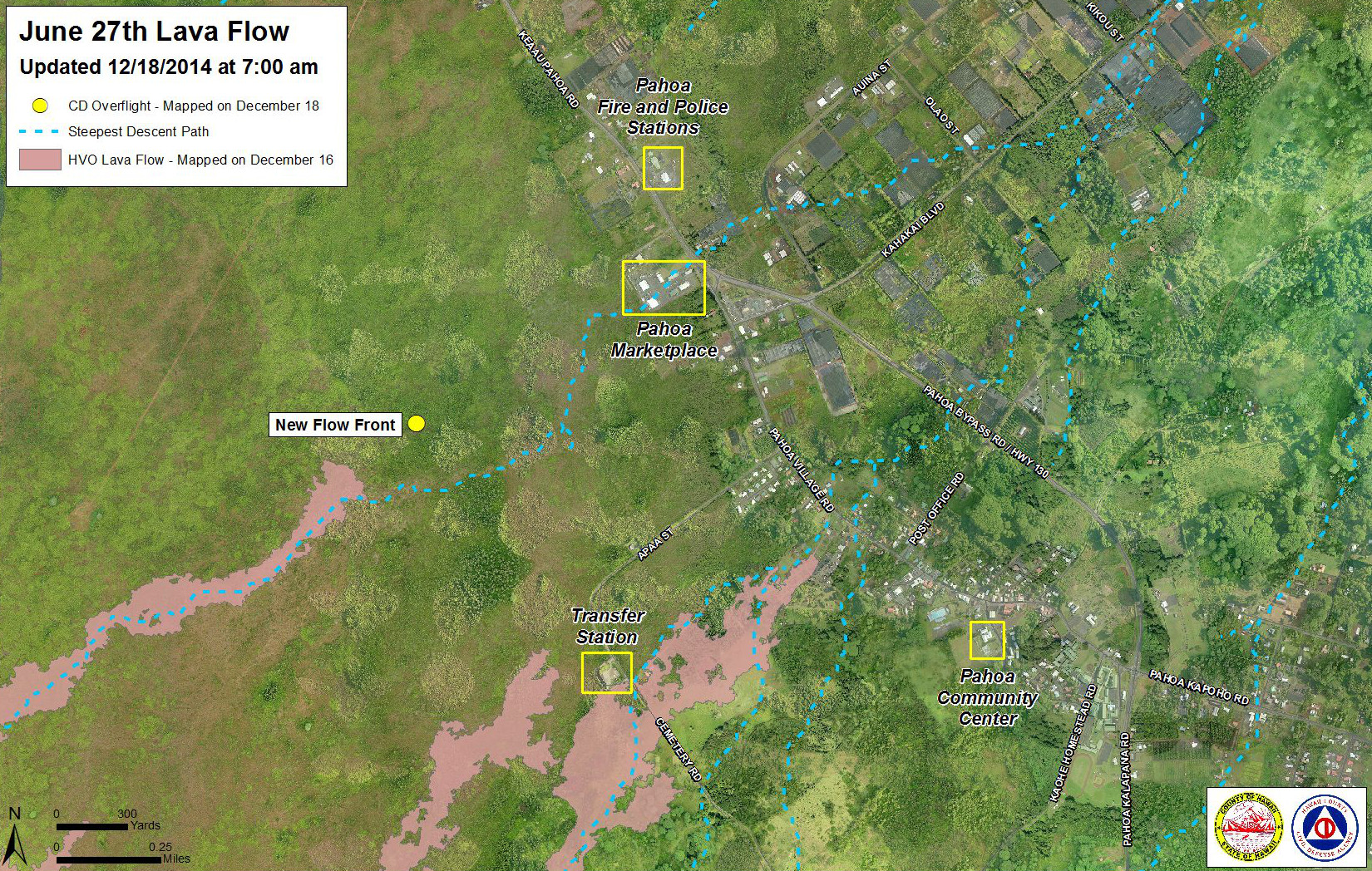 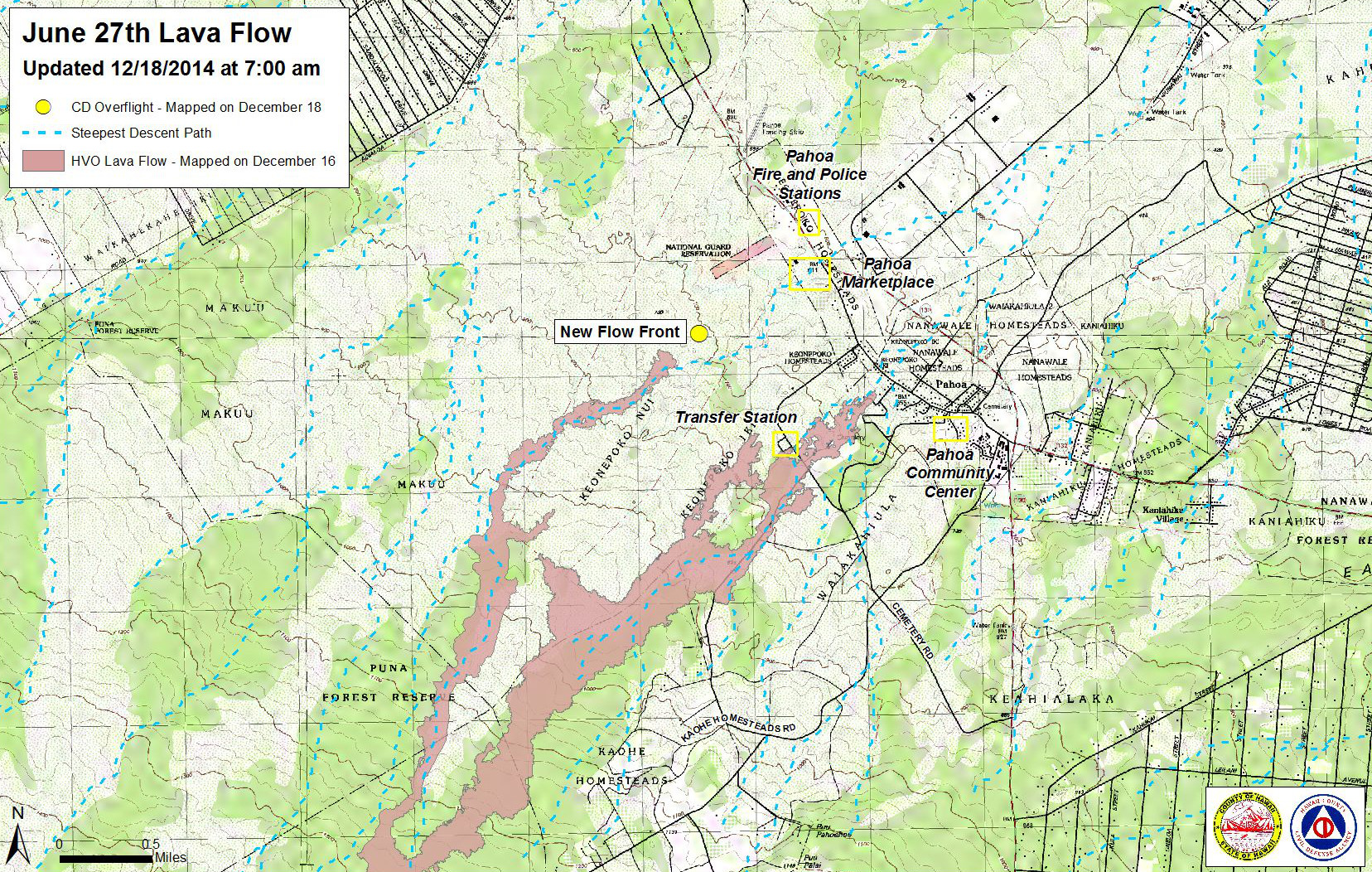 Kīlauea Volcano continues to erupt at its summit and within its East Rift Zone. A lava flow front consisting of two fingers remains active and advanced ~150 m (~165 yds) since yesterday according to Civil Defense. The leading edge of this front is approximately 1.3 km (0.8 miles) above the intersection of Pāhoa Village Road and Highway 130, near the Pāhoa Marketplace. A summit deflation event began last evening. No significant tilt has been observed at Puʻu ʻŌʻō since yesterday’s report.

June 27th Lava Flow Observations: HVO, along with Civil Defense, is monitoring a flow front that branches off the west edge of the flow field below the crack system. Civil Defense reported this morning that the leading edge of the flow was about 1.3 km (0.8 miles) upslope from the intersection of Pāhoa Village Road and Highway 130, near the Pāhoa Marketplace. As of this morning, Civil Defense photos also show that the flow front consists of two closely spaced fingers, both headed towards the intersection of Pāhoa Village Road and Highway 130, in the vicinity of the Pāhoa Marketplace. In addition to this active flow front, breakouts from the lava tube on December 5, about 2.6 km (1.6 mi) from Puʻu ʻŌʻō remain active. Yesterday, HVO staff installed two new time lapse web cameras in the vicinity of Pāhoa Marketplace. One of these cameras is trained on the market itself, and the other is directed up slope. Images from these cameras are available on the HVO website under the heading Webcams/ East Rift Zone.

Puʻu ʻŌʻō Observations: No significant change in ground tilt has been observed in the past 24 hours. All other monitoring data indicate no significant changes at Puʻu ʻŌʻō. Seismic tremor is low and steady, and webcams revealed no strong variations in the pattern of glow from degassing vents or the configuration of the crater floor. GPS-measured deformation across the cone has shown no net extension nor contraction since July. The most recent measurement of sulfur dioxide emissions from the East Rift Zone was about 300 tonnes per day on December 11, 2014.

Summit Observations: A tiltmeter at Kīlauea’s summit recorded the onset of summit deflation beginning at about 7:00 pm last night. The last such event occurred on 14 December and lasted about a day. The summit lava lake has shown the usual fluctuations associated with changes in spattering behavior, which are also manifested as variations in tremor amplitudes and gas release. Small amounts of particulate material were carried aloft by the plume. The average emission rate of sulfur dioxide ranged between 3,100 and 6,500 tonnes/day for the week ending on December 16USGS Hawaiian Volcano Observatory on Dec. 18 at 9:21 a.m. HST