Lava advanced 50 yards since 6:30 a.m. this morning remains about 0.8 miles upslope of the Highway 130 and Pahoa Village Road intersection.

(ABOVE VIDEO) This afternoon’s Civil Defense message with video courtesy the County of Hawaii and USGS Hawaiian Volcano Observatory.

This afternoon’s assessment shows that the flow front remains active and continues to advance in an east-northeast direction however may be slowing. The active flow had advanced approximately 50 yards since 6:30 this morning and the front remains approximately 0.8 miles upslope of the Highway 130 and Pahoa Village Road intersection. Current activity does not pose an immediate threat to area communities and Civil Defense and Hawaiian Volcano Observatory personnel are maintaining close observations of flow activity. Residents and businesses down slope will be kept informed of any changes in flow activity, advancement, and status. As the flow activity continues to show signs of advancement, businesses in the Pahoa Market Place are taking necessary steps to prepare for a possible evacuation. Motorists are advised to drive with caution and to be prepared for increased traffic and large vehicles in the area.

Smoke conditions in the immediate area were light to moderate with a light trade wind blowing the smoke in a south/southeast direction. Smoke conditions may increase in some areas and individuals who may be sensitive or have respiratory problems are advised to take necessary precautions and to remain indoors.

USGS Hawaiian Volcano Observatory (HVO) scientists conducted an overflight of the June 27th lava flow and Puʻu ʻŌʻō this early afternoon. The active lava lobe advanced about 340 m (370 yd) since December 16; the flow front split into two branches, one following the steepest descent path in the area and another following a “tributary” path to the north that intersects the main descent path a few hundred meters (yards) downslope. The flow tip was 1 km (0.6 mi) from the Pāhoa Marketplace. Several breakouts were also scattered along the edges and interior of the flow 2 to 3.7 km (1.2 to 2.3 mi) upslope of the flow front, similar to activity of the past several days.

The eruption rate measured today from the Pu`u` Ō`ō vent is similar to measurements made on December 9 and 16. Several breakouts from the tube were still occurring in the upper flow field, about 3.2 km (2 mi) from Pu`u` Ō`ō and in the crack system 8.5 km (5.3 mi) farther downslope, but they appeared to be less active compared to observations earlier this week. USGS Hawaiian Volcano Observatory on Dec. 18 at 10 p.m. HST 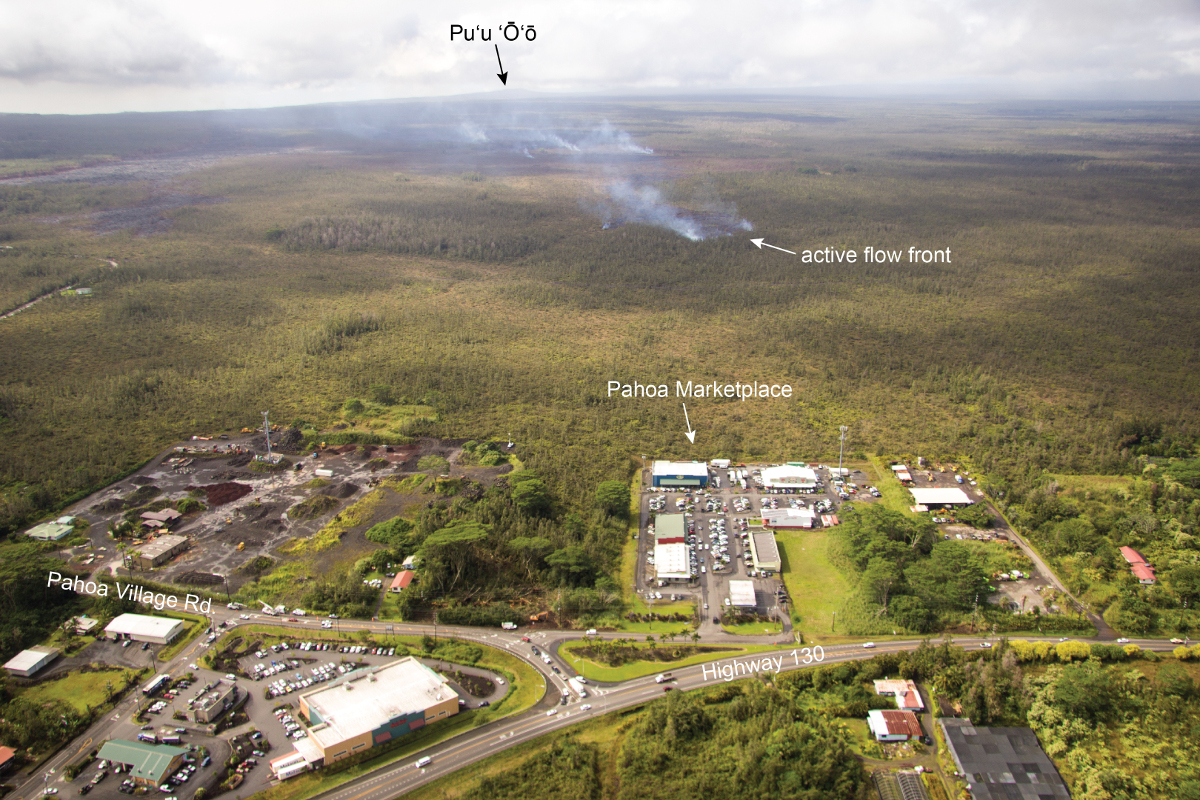 This USGS photo shows the leading tip of active lava on the June 27th flow advancing downslope, through thick vegetation, towards the northeast, with Pahoa Marketplace and Highway 130 in the foreground.

This USGS image shows a comparison of a normal photograph looking downslope with a thermal image. The white box shows the rough extent of the thermal image. In the thermal image, white and yellow pixels show active surface lava, which is focused along the leading edge of the flow. 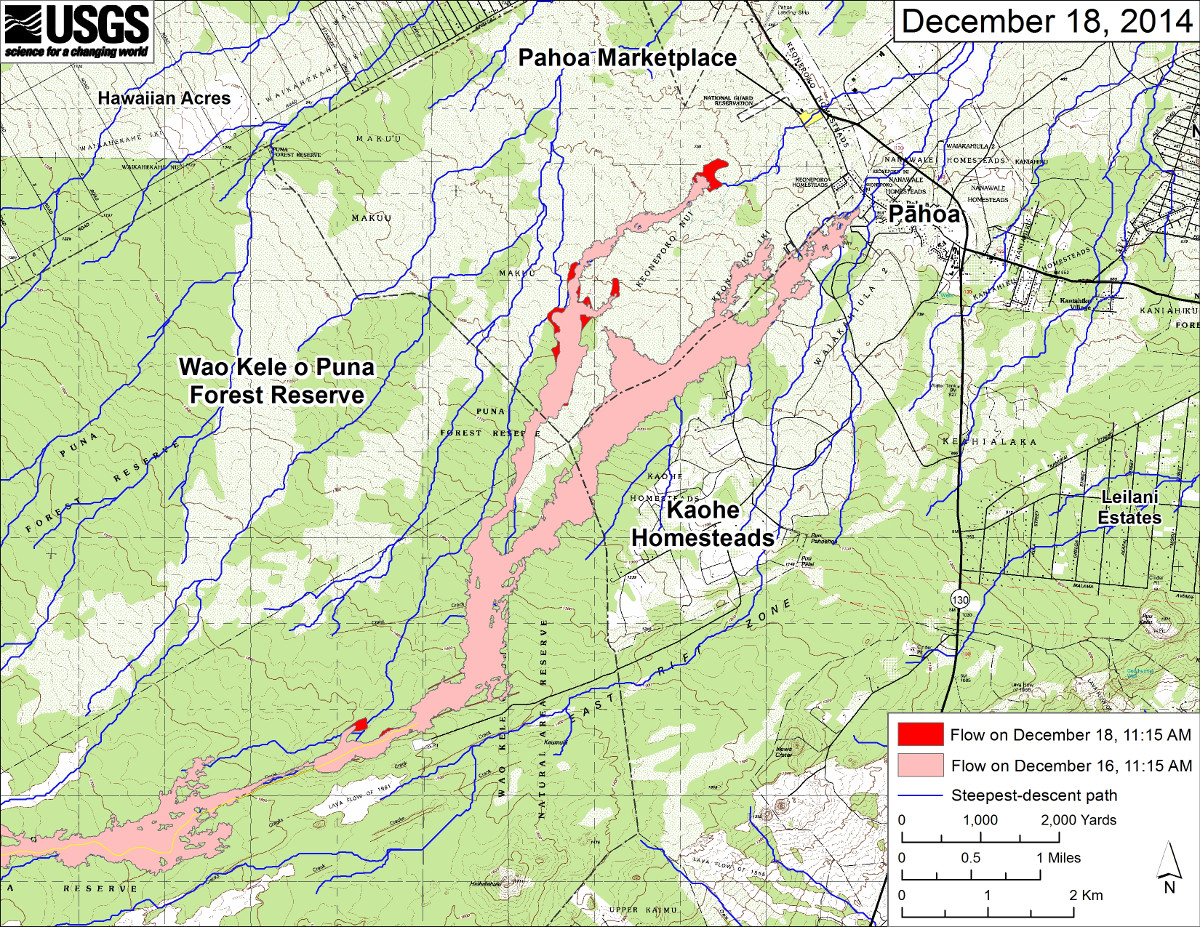 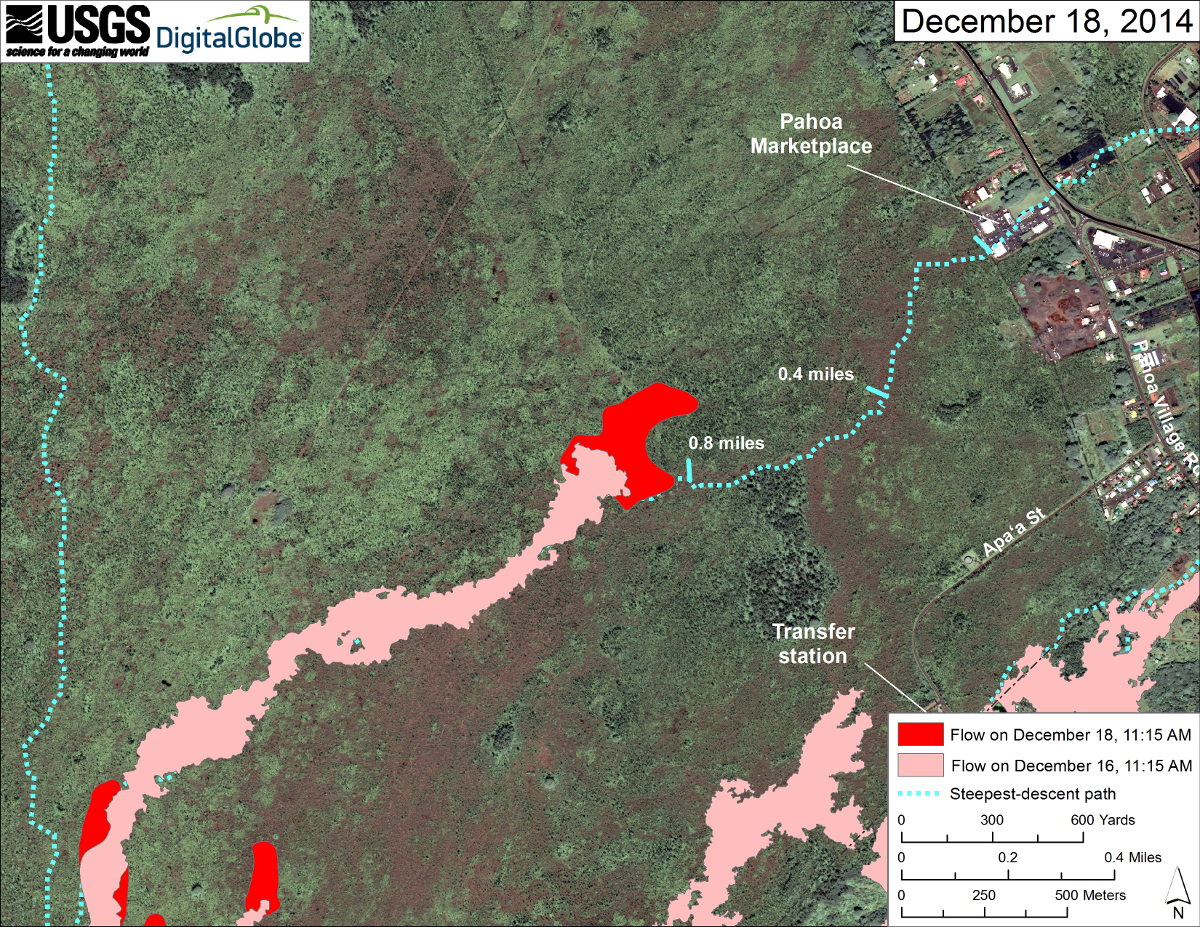