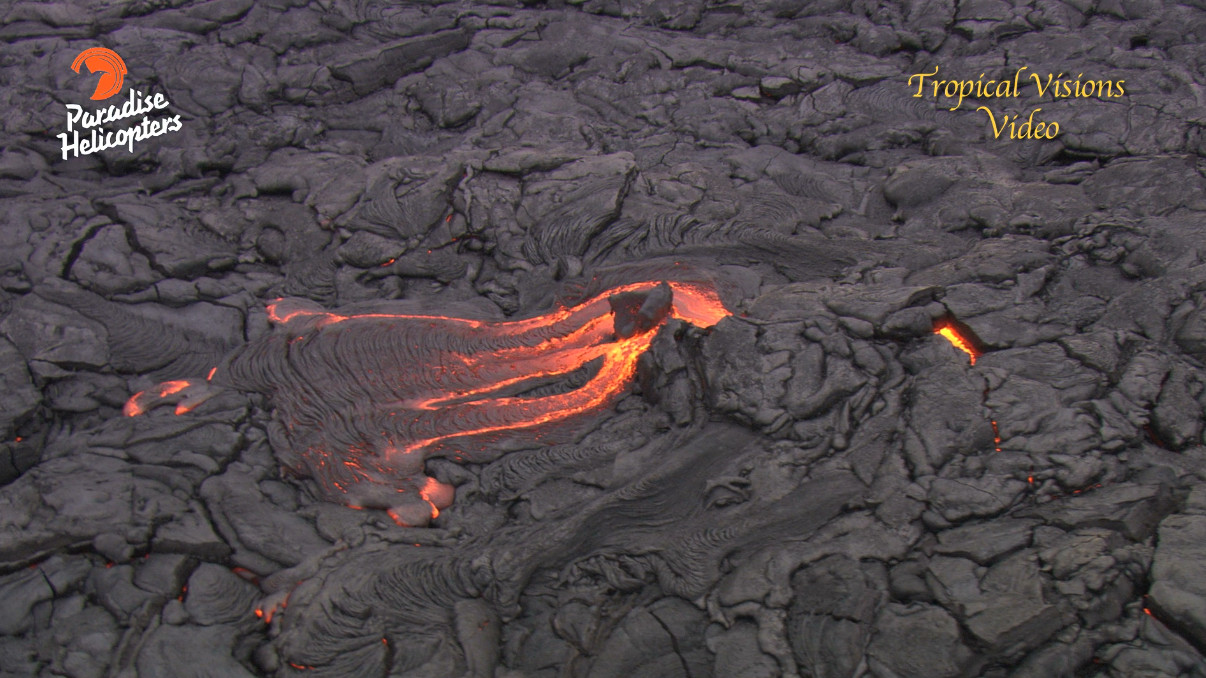 Image of a surface breakout on New Years Eve, taken from video by Mick Kalber.

PUNA, Hawaiʻi - On the first day of 2015, the front of the June 27 lava flow was stalled .5 miles upslope of the Highway 130 and Pahoa Village Road

This morning’s assessment shows very little activity at the flow front and no advancement since yesterday. The front or leading edge remains .5 miles upslope of the Highway 130 and Pahoa Village Road intersection and approximately 660 yards from the Pahoa Market Place complex. A breakout along the south margin or side of the flow remains active and has advanced approximately 20 yards since yesterday afternoon. This breakout remains upslope or approximately 150 yards behind the flow front. Surface breakouts and activity along both margins continues upslope however, current activity does not pose an immediate threat to area communities. Civil Defense and Hawaiian Volcano Observatory personnel are maintaining close observations of the flow. Residents and businesses down slope will be kept informed of any changes in flow activity, advancement, and status.

Smoke conditions were moderate this morning with a light variable wind.

The public access lava viewing at the Pahoa Transfer Station will be closed today, Thursday January 1st and reopen for normal viewing access tomorrow Friday January 2nd. We apologize for any inconvenience this may cause.

The public is reminded that the viewing area opens at 8:00am and closes promptly at 6:00pm.

The year 2015 was greeted with Kīlauea Volcano continuing to erupt at its summit and within its East Rift Zone. According to Civil Defense, this morning’s over flight showed that the front of the lava flow remains stalled. However, a breakout along the south margin of the flow remains active and has advanced approximately 20 yards since yesterday afternoon. Surface breakouts and activity along both margins continue up slope of the front. This morning, minor deflationary tilt is being recorded at the summit.

June 27th Lava Flow Observations: This morning brought the New Year’s gift of a continued stalled flow front, located around 530 m (580 yards) up slope of the Pāhoa Marketplace. However, Civil Defense reports that an active lobe along the south margin of the flow and 150 m (165 yards) up slope of the flow front has advanced 20 meters since yesterday afternoon. In addition, the flow continues to have surface breakouts behind and up slope of the front, according to HVO webcams and Civil Defense. Yesterday’s satellite data showed small breakouts within 1 km (0.6 miles) of the stalled front, as well as areas of activity 3 and 6 km (1.9 and 3.7 miles) up slope. Minor deflationary tilt is being recorded at the summit this morning.

Puʻu ʻŌʻō Observations: Over the last 24 hours, variable tilt was recorded at Puʻu ʻŌʻō, with minor deflationary tilt occurring this morning. All monitoring data indicate no significant changes at Puʻu ʻŌʻō. The most recent measurement of sulfur dioxide emissions from all East Rift Zone vents was about 250 tonnes per day on December 19, 2014.

Summit Observations: This morning, minor deflationary tilt is being recorded at the summit. The summit lava lake has shown the usual fluctuations associated with changes in spattering behavior, which are also manifested as variations in tremor amplitudes and gas release. Small amounts of particulate material were carried aloft by the plume. The average emission rate of sulfur dioxide was around 6,000 tonnes/day for the week ending on December 31 USGS Hawaiian Volcano Observatory on Jan. 1 at 9:13 a.m. HST