Twenty four year old Aaron Bremner, a participant in the YWAM Ships Kona mission, has not been located.

(ABOVE) Report from Kona with video by Lynn Beittel of Visionary Video, voice of Sherry Bracken

YWAM Ships Kona is part of the University of the Nations’ Youth with a Mission. Here is a media release they issued on Saturday:

At approximately 5:45 AM on Saturday, January 3, the HAWAI’I ALOHA, a 75-foot sailboat operated by YWAM Ships Kona, capsized 4 miles offshore from the Kona coast of the Big Island of Hawaii. The vessel’s second mate remains missing and the captain is currently hospitalized in Waimea with non-life threatening injuries. All crew families have been notified.

After receiving a National Weather Service alert the previous night, the 5 person crew headed 6 miles out to sea to outlast the dangerous conditions. The ship was cutting into rough waves approximately four miles from shore when a series of large waves hit the vessel broadside, flipping it twice. The crew shot off flares and 4 of the 5 crew abandoned ship into an emergency life raft. After seeing the flares two jet ski operators rescued the crew in the life raft.

The vessel was loaded with supplies to depart for the Christmas Island this upcoming Tuesday. YWAM SHIPS exists to reach the most isolated and disadvantaged islands through medical, dental, clean water systems and educational initiatives. This is the first marine tragedy in YWAM’s decades of service.

Our first concern is for the safety and well being of the crew involved in this incident. Out of respect and privacy for these individuals, we ask for your patience and understanding at this time.

YWAM Ship’s Fleet Support is working in cooperation and collaboration with Hawaii Island’s Department of Land and Natural Resources and Hawai’i’s Coast Guard. A full search of the vessel is underway and the search for the missing crew member is ongoing.YWAM Ships media release on Jan. 3, 2015 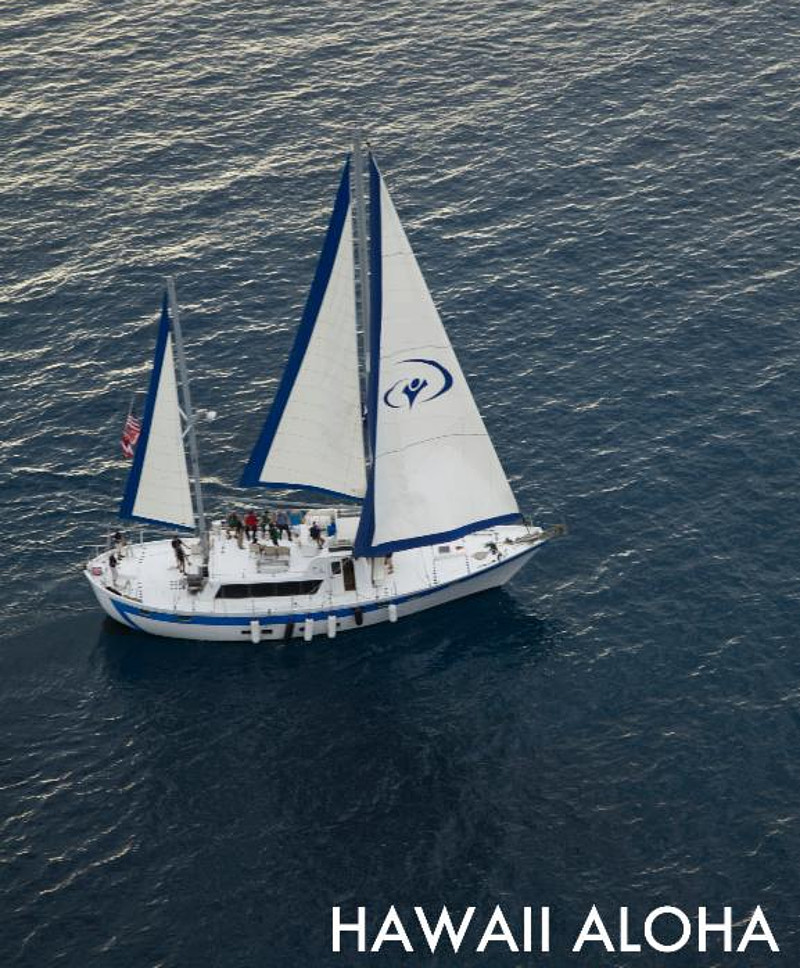 Image of the Hawaii Aloha taken before the incident, courtesy YWAM Ships Kona 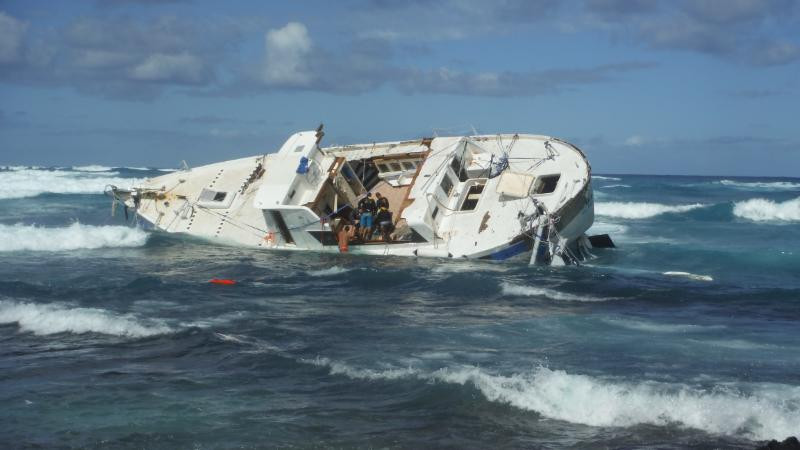 The U.S. Coast Guard issued this media release on Sunday:

The Coast Guard is supporting the Hawaii County Fire Department in the search for a missing passenger from a grounded sailboat near Kaupuleu, Hawai’i, Sunday.

Watchstanders at Coast Guard Sector Honolulu received notification at 6:36 a.m., of a flare sighting Saturday, from the Hawaii County Fire Department. The flares were later confirmed as having been fired by the crew of the 74-foot sailing vessel, Hawaii Aloha, who abandoned ship into a life raft. Four of the five boaters aboard the Hawaii Aloha were found in the life raft and rescued by the fire department. The vessel subsequently grounded and one crew member remains missing.

It is unknown if the missing individual remains aboard the grounded vessel. Local fire department first responders plan to conduct a search of the interior of the vessel Sunday.

The Coast Guard, state and local first responder agencies regularly work together to contribute resources and expertise in support of response efforts throughout the Main Hawaiian Islands.USCG 14th District Public Affairs on Jan. 4 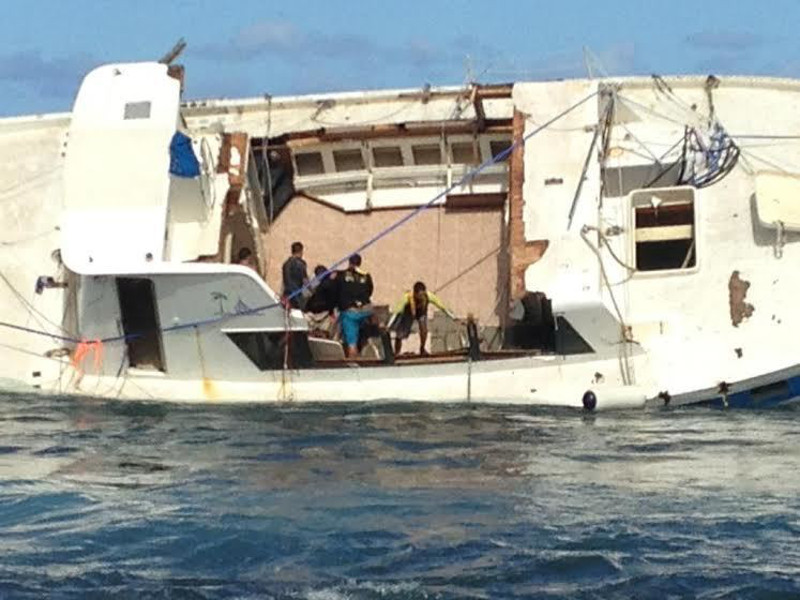 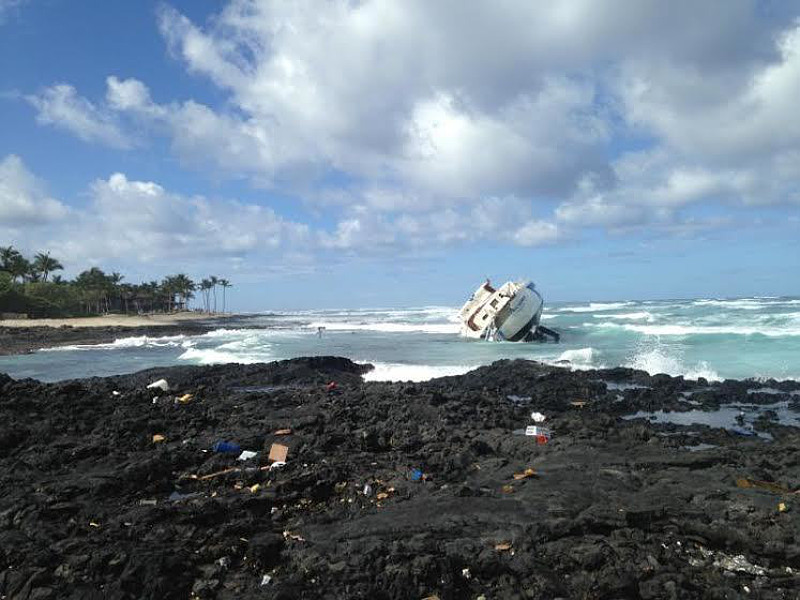 The Hawaii Aloha wasn’t the only vessel to get into trouble after the severe winter storm on Jan. 2 and 3. The Department of Land and Natural Resources (DLNR) says they have received reports of at least six vessels adrift or grounded. Here is what the department stated in regards to the Kona incident:

A 75-foot, 84-ton sailing ketch, Hawaii Aloha ran aground in the wave zone fronting the Four Seasons Hualalai Resort on Hawaii Island, Friday night. The boat’s captain and three crew members managed to get off before it grounded. The search for a fifth crew member is continuing. Staff from the DLNR Divisions of Aquatic Resources (DAR) and Boating and Ocean Recreation (DOBOR), are working with salvage and insurance companies to develop a salvage and wreckage removal plan for the Hawaii Aloha. Interim DLNR Chairperson Carty Chang said, “We want to exercise great care in removing this boat, as it still contains more than 500 gallons of diesel fuel and is resting in a position that could cause environmental damage. The plans we’re working on currently will take into consideration all factors to minimize any further damage to fragile natural resources.”DLNR media release on Jan. 5