Lava has not advanced since yesterday morning.

(ABOVE) USGS photo shows one of many small breakouts on the surface of the June 27th flow immediately upslope of the leading edge. “Many inflation features are present on the flow,” write scientists, “including the tumulus in upper right.” 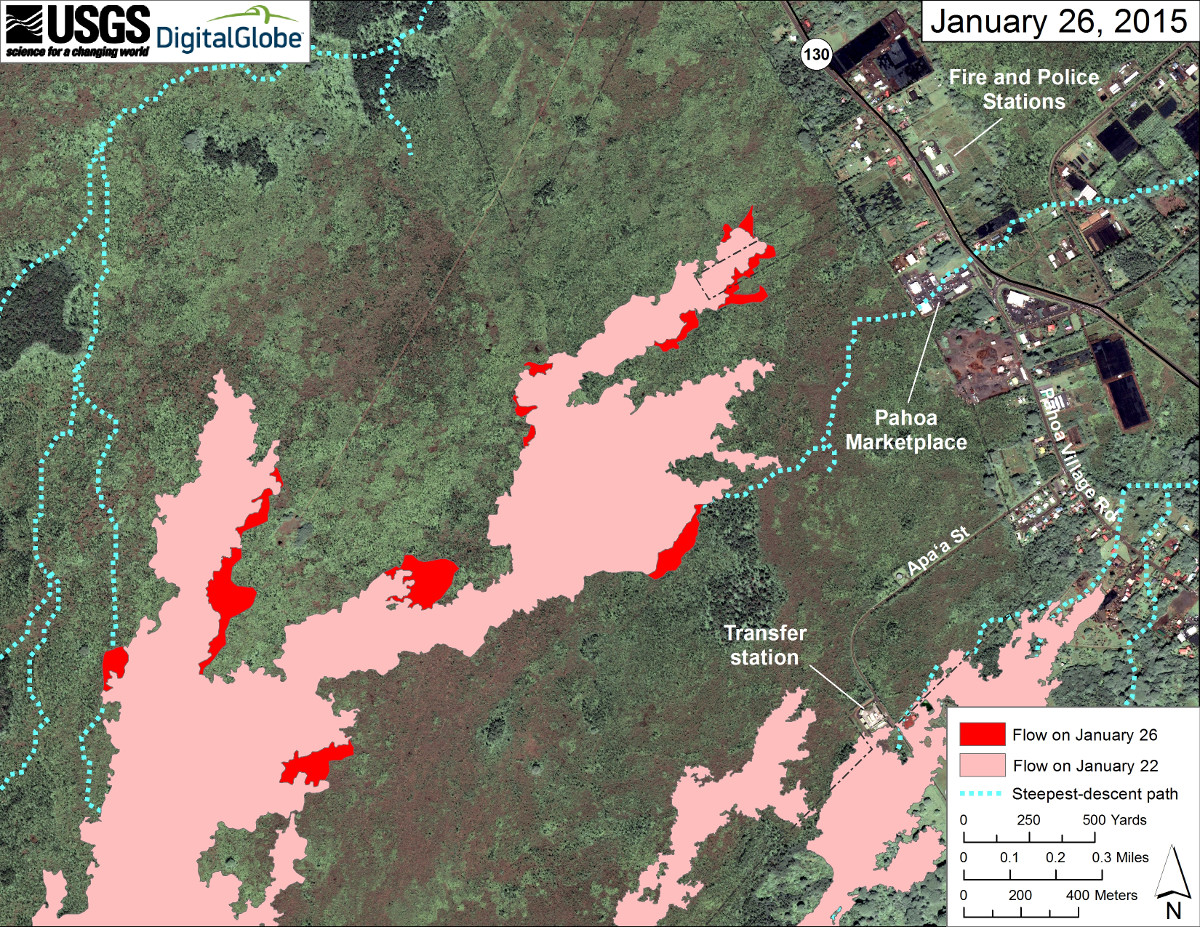 This morning’s assessment shows that the original flow front and south margin breakout remain stalled. The breakout along the north side of the flow continues to be active and widening, however showing no signs of advancement. The leading edge or front of this breakout has not advanced since yesterday morning and is located approximately 0.36 miles from the area of Highway 130 to the west or mauka of the Pahoa Police and Fire Stations. Two other breakouts along the north margin located 1-1.5 miles further upslope or behind the flow front showed little activity and no signs of advancement. A number of other breakouts along both margins of the flow and within the flow pad were observed however all current activity does not pose an immediate threat to area communities. The Hawaii County Civil Defense Agency and Hawaiian Volcano Observatory are maintaining close observations of the flow. Residents and businesses down slope will be informed of any changes in flow activity and advancement.

Smoke conditions were light to moderate with a light northeast wind blowing the smoke in a southwest direction. Smoke conditions may increase in some areas and individuals who may be sensitive or have respiratory problems are advised to take necessary precautions and to remain indoors. With the current and ongoing light rain in the area there was no brush fire activity. 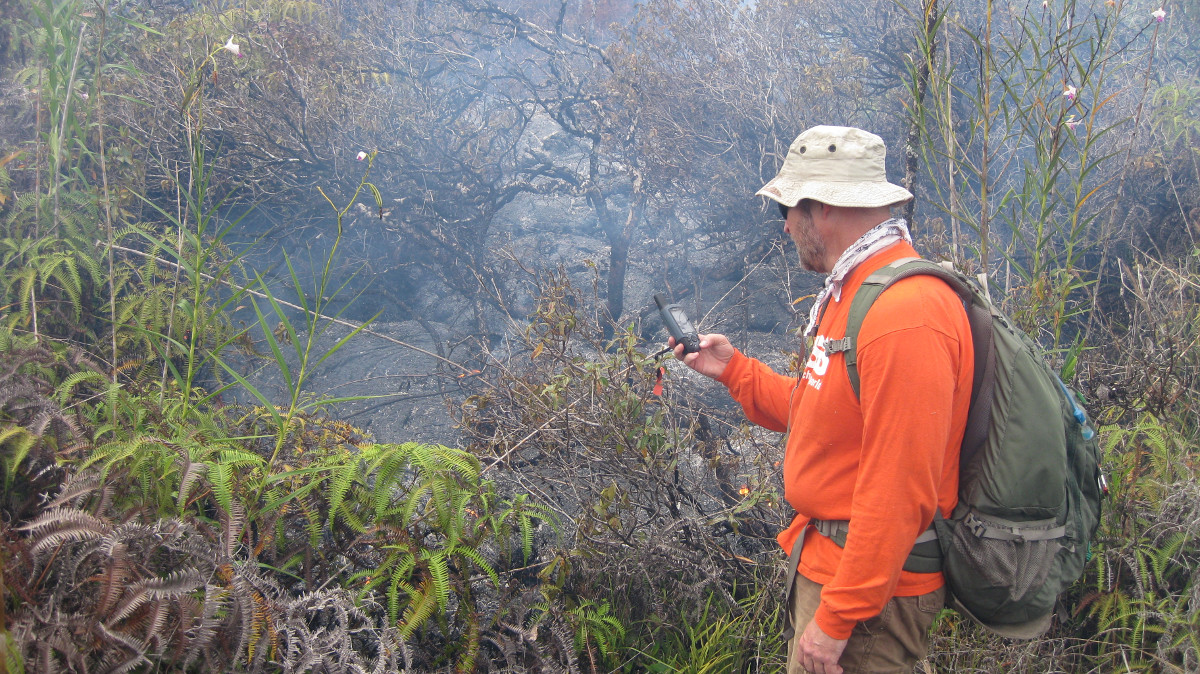 USGS photo shows a HVO geologist taking a gps waypoint of the leading edge of the June 27th flow, which consisted of a narrow, sluggish breakout during Monday afternoon.

Kīlauea Volcano continues to erupt at its summit and within its East Rift Zone. Field observations by HVO scientists on Monday placed the active tip of a narrow finger of lava from the June 27th lava flow roughly 500 m (~550 yd) from Highway 130 in the area west of the Pahoa Fire and Police Stations. Significant inflation within the interior of this lobe, in addition to continued breakouts along the northern margin 1 to 1-1/2 miles (~1.6 to 2.4 km) upslope of the flow tip and within the interior of this lobe, was also noted. The original flow front and south margin of the June 27th flow remain stalled. No significant changes are noted from Pu`u O`o or Kīlauea summit.

June 27th Lava Flow Observations: HVO field reports from area of the June 27th lava flow tip upslope of the Pahoa Fire and Police stations confirmed continued activity on Monday. Small breakouts extended from the tip to at least about 500 m upslope. The active flow tip was roughly 500 m (~550 yd) from Highway 130, at the end of a narrow advancing finger of lava less than 10 m across. This northeast advancing lobe also shows considerable inflation in its central part, with breakouts in the flow interior and incandescent cracks extending across the flow.

This morning’s update from County Civil Defense reports no significant changes to the flow field since yesterday and that upslope breakouts along the north flow margin, some 1 to 1-1/2 mi (~1.6 to 2.4 km) behind the flow front remained active, but they have not advanced significantly. Additional active breakouts within the flow field and along the flow margins were also noted and smoke from resulting fires was evident in HVO Webcams. The original front of the June 27th lava flow and the south margin breakouts remain stalled.

Hot spots are evident in the images from the HVO Webcams deployed at Pahoa Marketplace, whether from lava breakouts or fires. They extend across significant fractions of the width of the fields of vision of those cameras.

Puʻu ʻŌʻō Observations: No significant changes are noted since yesterday in monitoring data streams from instruments deployed near Pu`u O`o. A few persistent incandescent spots are visible in the Web cam images. The Pu`u O`o tiltmeter appears to be adjusting from transients resulting from large amounts of rain recently in that area. On Monday, it was reported that sulfur dioxide emissions from all East Rift Zone vents was about 200 tonnes per day, continuing to suggest a general decline in emission levels.

Summit Observations: No significant changes are apparent within the Halema`uma`u Overlook vent. The lava lake there continues to episodically spatter, and lava lake levels continue to fluctuate slightly. Measurements of the depth on Monday to the lava lake surface indicate a slight rise of the lake surface to 40.5 m, some 2 meters shallower than Friday’s measurement. Emission rates of sulfur dioxide ranged from around 4,500 to 7,600 tonnes/day during the week ending January 13.USGS Hawaiian Volcano Observatory on Jan. 27 at 9:04 a.m. HST