No changes to report on the flow front since yesterday. Story includes video presentation to go with yesterday's conference call.

(ABOVE PHOTO) Image released by USGS Hawaiian Volcano Observatory on Jan. 29 shows the flow front, a mere 550 yards away from Highway 130 at its closest point. The distal tips are stalled, however “breakouts persist upslope,” writes USGS, “and these areas of activity can be spotted in this photograph by small smoke plumes where the lava is burning vegetation on the flow margins.” 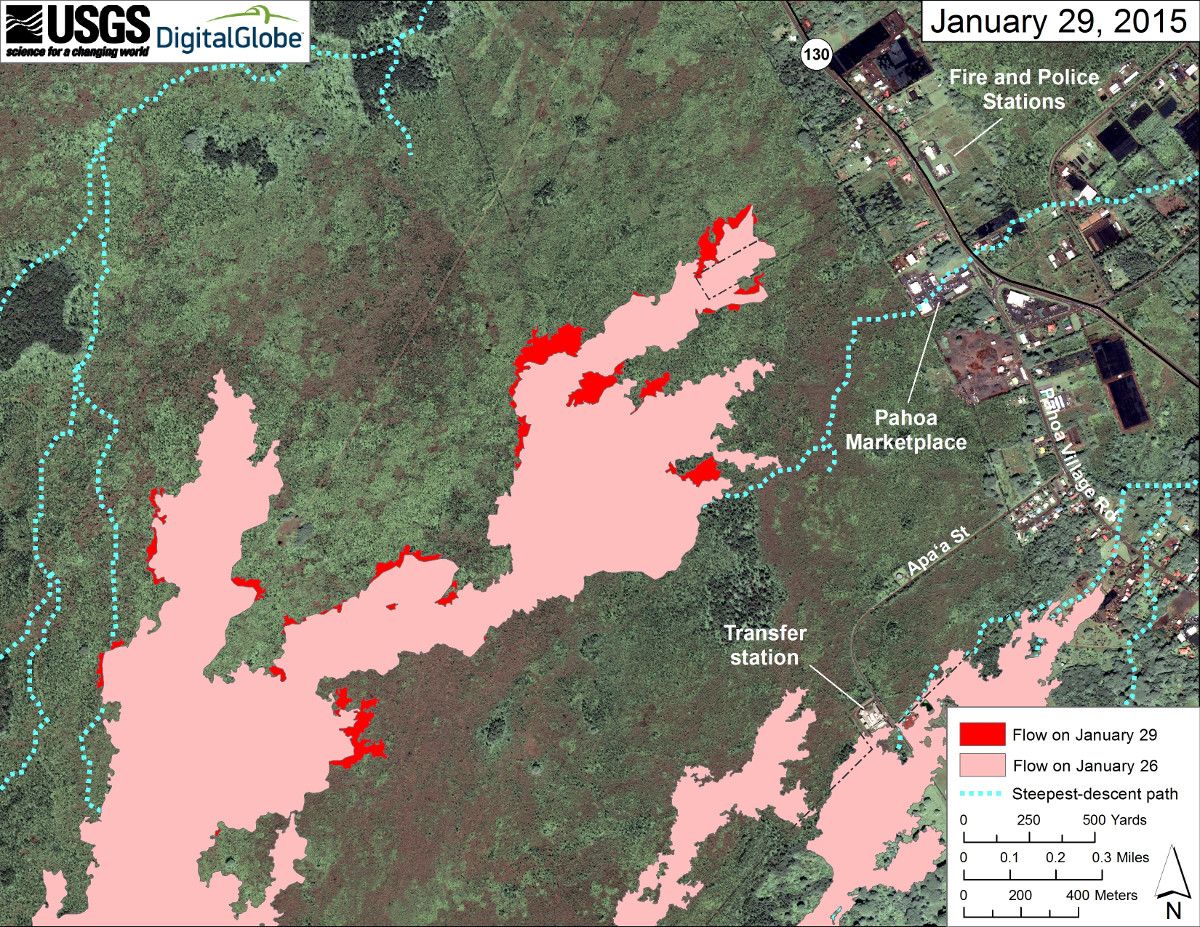 This morning’s assessment shows that the original flow front and south margin breakout remain stalled. The breakout along the north side of the flow continues to be active and widening, however showing no signs of advancement. The leading edge or front of this breakout has not advanced since Monday morning and is located approximately 0.36 miles from the area of Highway 130 to the west or mauka of the Pahoa Police and Fire Stations. Two other breakouts along the north margin located 1-1.5 miles further upslope or behind the flow front showed little activity and no signs of advancement. A number of other breakouts along both margins of the flow and within the flow pad were observed however all current activity does not pose an immediate threat to area communities. The Hawaii County Civil Defense Agency and Hawaiian Volcano Observatory are maintaining close observations of the flow. Residents and businesses down slope will be informed of any changes in flow activity and advancement.

Smoke conditions were light with a light south wind blowing the smoke in a north/northeast direction. Smoke conditions may increase in some areas and individuals who may be sensitive or have respiratory problems are advised to take necessary precautions and to remain indoors. No brush fire activity was noted this morning and fire conditions will be monitored closely.

Additional updates will be broadcast as condition change.

Kīlauea Volcano continues to erupt at its summit and from its East Rift Zone. The leading tip of the June 27th lava flow remains roughly 500 m (~550 yd) from Highway 130 in the area west of the Pāhoa Fire and Police Stations, and the flow tip has not advanced significantly in the past day, although breakouts continue upslope. Deflation associated with a DI event began at the summit on Thursday morning and switched to inflation early Friday morning.

June 27th Lava Flow Observations: An HVO overflight on Thursday morning assessed activity along the entire length of the June 27th lava flow. The primary observation was of scattered breakouts that continue to widen and thicken the flow without resulting in any advancement. The closest breakout to Highway 130 observed during the overflight was about 130 m (142 yards) upslope of the stalled flow tip. Numerous other breakouts were scattered within 3 km (1.9 mi) of the flow tip. In addition, breakouts were noted in areas that have seen persistent activity for months, including where the lava flow exits the crack system, as well as near Kahaualeʻa cone, a few km (miles) downslope from Puʻu ʻŌʻō.

This morning’s Civil Defense overflight observed that the flow front did not advance overnight, and that flow widening continues to be the dominant form of activity.

Puʻu ʻŌʻō Observations: Eruptive activity remains steady at Puʻu ʻŌʻō, as indicated by data from instruments on and around the cone. Thermal imagery collected from the air and from webcams shows a few persistent hot spots associated with small collapse pits. Seismic tremor has been low, and no net tilt has occurred over the past 24 hours. The rate of sulfur dioxide emission from all East Rift Zone vents was about 200 tonnes per day, measured on January 7.

Summit Observations: Tiltmeters operating around the summit recorded the occurrence of a DI (deflation-inflation) event over the past day. Deflation started at about 10 AM HST on Thursday and switched to inflation at about 3 AM Friday. The event was small in magnitude, so there was little corresponding change in the level of lava within the summit vent. The lava level did experience its normal fluctuations and changes in spattering behavior, which correlated with changes in seismic tremor. At about 3:20 AM on Friday a small portion of the fresh lava veneer on the vent wall just above the lava surface collapsed into the lava lake, generating a small seismic signal and minor spattering. The depth to the lava surface on Thursday morning was measured to be about 44 m (144 ft) below the vent rim. Emission rates of sulfur dioxide ranged from around 4,400 to 5,100 tonnes/day during the week ending on January 27.USGS Hawaiian Volcano Observatory on Jan. 30 at 8:20 a.m. HST