The quake was located 8 miles west southwest of Volcano at a depth of 8 miles.

UPDATED (12:45 p.m.) HAWAII ISLAND – A magnitude 4.3 earthquake (revised number, initially measured at 4.0) shook Hawaii Island on Monday morning. The quake was located 8 miles west southwest of Volcano at a depth of 8 miles. The Pacific Tsunami Warning Center said no tsunami is expected from the earthquake.

Later in the day, scientists with the USGS Hawaiian Volcano Observatory issued a media release on the event. According to Wes Thelen, HVO’s Seismic Network Manager, the earthquake was centered about 5 miles west-southwest of the summit of Kīlauea, however the quake has caused no detectable changes on Kīlauea or other active volcanoes on the Island of Hawaiʻi.

As of 8:30 a.m. HST, the temblor was reportedly felt as weak shaking from the Hilo area across South Kona and in pockets as far north as Waimea.

The USGS “Did you feel it?” Web site received more than 80 felt reports within two hours of the earthquake. It was felt across the Island of Hawaiʻi, but most of the felt reports were from the village of Volcano. Reports indicate that residents experienced only weak shaking (Intensity III) during the earthquake. At these shaking intensities, damage to buildings or structures is not expected. USGS HVO on Feb. 9, 2015

Scientists also say as of 10:00 a.m., HST, Monday morning (February 9), five aftershocks have been recorded. The strongest of these aftershocks has been magnitude-1. HVO also provided a historical perspective on the quake:

During the past 25 years, there have been two earthquakes in this same general area with magnitudes greater than 3.0 and depths of 10–20 km (6–12 mi). Today’s earthquake could lie on the fault that marks the boundary between Mauna Loa and Kīlauea, or it could have occurred on a reactivated fault within the old oceanic crust upon which the Island of Hawaiʻi is built. USGS HVO on Feb. 9, 2015 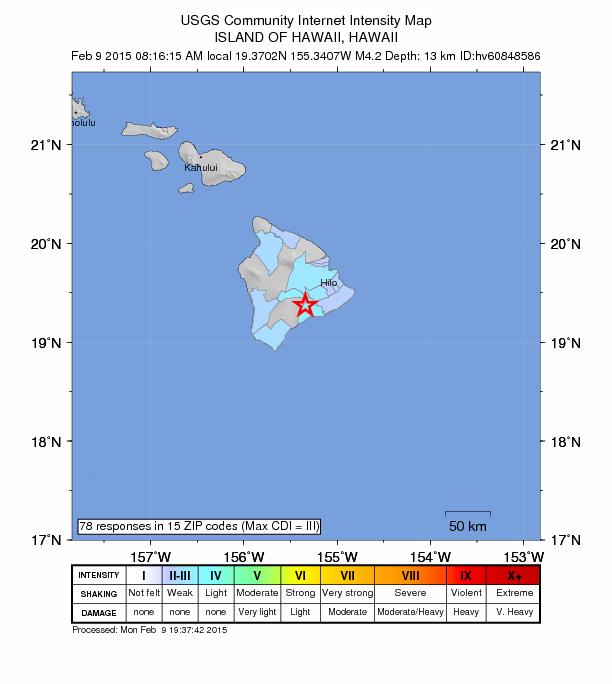