KONA - Aquarium fish collector Jay Lovell, facing charges for his role in a videotaped altercation off the Kona coast last year, went before a 3rd Circuit Court judge on Wednesday.

KONA – Aquarium fish collector Jay Lovell, facing charges for his role in a videotaped altercation off the Kona coast last year, went before a 3rd Circuit Court judge on Wednesday.

The day was set aside for the start of Lovell’s trial in a nationally publicized case of fish collector vs. conservationist. Reef activist Rene Umberger was out on the water filming Lovell in 2014, documenting him from a distance as he was collecting fish. In the video, Lovell suddenly swam over to Umberger, apparently ripping the breathing regulator from her mouth. Umberger struggled to regain the device and survived.

The incident made global headlines, in part because it was caught on video.

There was no trial on Wednesday. Lovell and his attorney struck a deal with prosecutors and the fish collector pleaded no contest to the charge of second-degree terroristic threatening. He received a deferred six-month prison sentence from Judge Ronald Ibarra and must have an anger management assessment, according to the terms of his plea agreement. 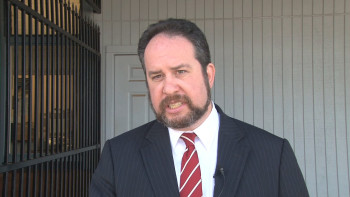 Marcus Landsberg IV: “We are satisfied with the plea agreement. We commend the prosecutors office for working with us on this. It is fair, to both sides. Jay is punished functionally for whatever wrong he did, and he’s not over punished. It’s not overkill based on something he didn’t do, or was accused of or something that was made up. Which is really what our fear was going into this case. That he would be over punished.”Marcus Landsberg IV, attorney for Jay Lovell 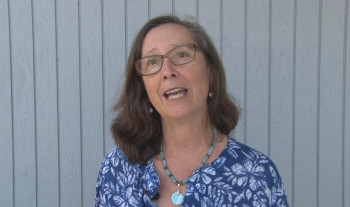 Rene Umberger: “In another world, the hearing wouldn’t have been today on the same day that the Hawaii County Council is hearing important laws to regulate the trade. And so we might have for gone ahead and ‘said let’s move ahead with the trial.’ But timing. Timing is everything.”Rene Umberger