This media release is from the University of Hawaiʻi at Mānoa: 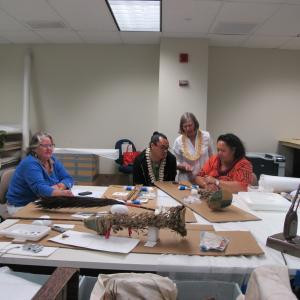 The University of Hawaiʻi Library’s Preservation Department is partnering with Daughters of Hawaiʻi on a FEMA-funded project to stabilize cultural materials from Hulihe’e Palace that were damaged by the 2011 tsunami.

At an open house to be held on Sunday, February 22 (fifth floor of the Hamilton Addition, from 12 p.m. to 4 p.m.), the community is invited to see four hand-held kahili and learn about the work being done to care for them. Hawaiian feather work experts Mele Kahalepuna Chun and Kawika Lum will be on hand with objects conservator Alex Allardt to answer questions.

Although the kahili were in poor condition prior to the tsunami, and were never intended for display, they offer a unique opportunity to get up close and understand the design and skill of the artists who constructed them. Steps are being taken to stabilize the kahili by removing salt and dirt deposits from the feathers, wrappings and handles. This stabilization will ensure that the kahili are available for future research.

Mele Kahalepuna Chun will also showcase some of the contemporary Hawaiian feather work featured at her family’s store, Na Lima Mili Hulu Noeau, in Kaimuki.University of Hawaiʻi at Mānoa media release on Feb. 20, 2015