KEALAKEHE, Hawaii – On Wednesday, The Hawaii County Council voted in support of a resolution funding the proposed Kona Judiciary building at the state legislature.

The local lawmakers said the effort at the state legislature to secure the remaining balance of $55 million to complete the project is sorely needed. 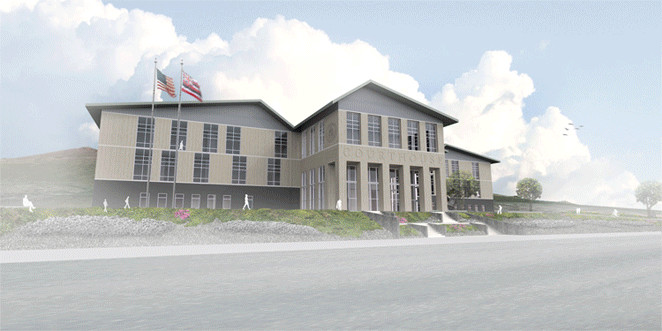 WHEREAS, the State court operations in Kona are presently carried out in three separate facilities: (1) the District and Circuit Courts are located in Kealakekua in the former Kona Hospital building, which was built in 193 9; (2) the Drug Court, also in Kealakekua, is housed in a leased facility several blocks from the District and Circuit Courts; and (3) the Family Court is situated eight miles from Kealakekua in a leased office building; and

WHEREAS, the conditions and accommodations of the Kona court facilities are grossly inadequate to service the needs of a growing West Hawai‘i community; and WHEREAS, recognizing the need to address this situation, the Hawai‘i State Legislature, in 2014, appropriated $35 million toward the projected $90 million construction costs for the Kona Judiciary Complex project; and

WHEREAS, an appropriation during this legislative session for the remaining balance of $55 million is being sought by the Hawai‘i State Judiciary in order to ensure the completion of this project; and

WHEREAS, this Council recognizes the importance of having a new Judiciary Complex built in Kona, not only for the benefit of the West Hawai‘i community, but for all residents of our island; now, therefore,

BE IT RESOLVED BY THE COUNCIL OF THE COUNTY OF HAWAI‘I that it applauds the Hawai‘i State Legislature in recognizing the importance of building a new Judiciary Complex in Kona and fully supports the efforts of the Hawai‘i State Judiciary in seeking an appropriation for the remaining balance of $55 million, which is crucial for the completion of the project.