PUNA - There has been no advancement of the lava flow front, however activity on the surface and along both margins continues, with numerous small breakouts 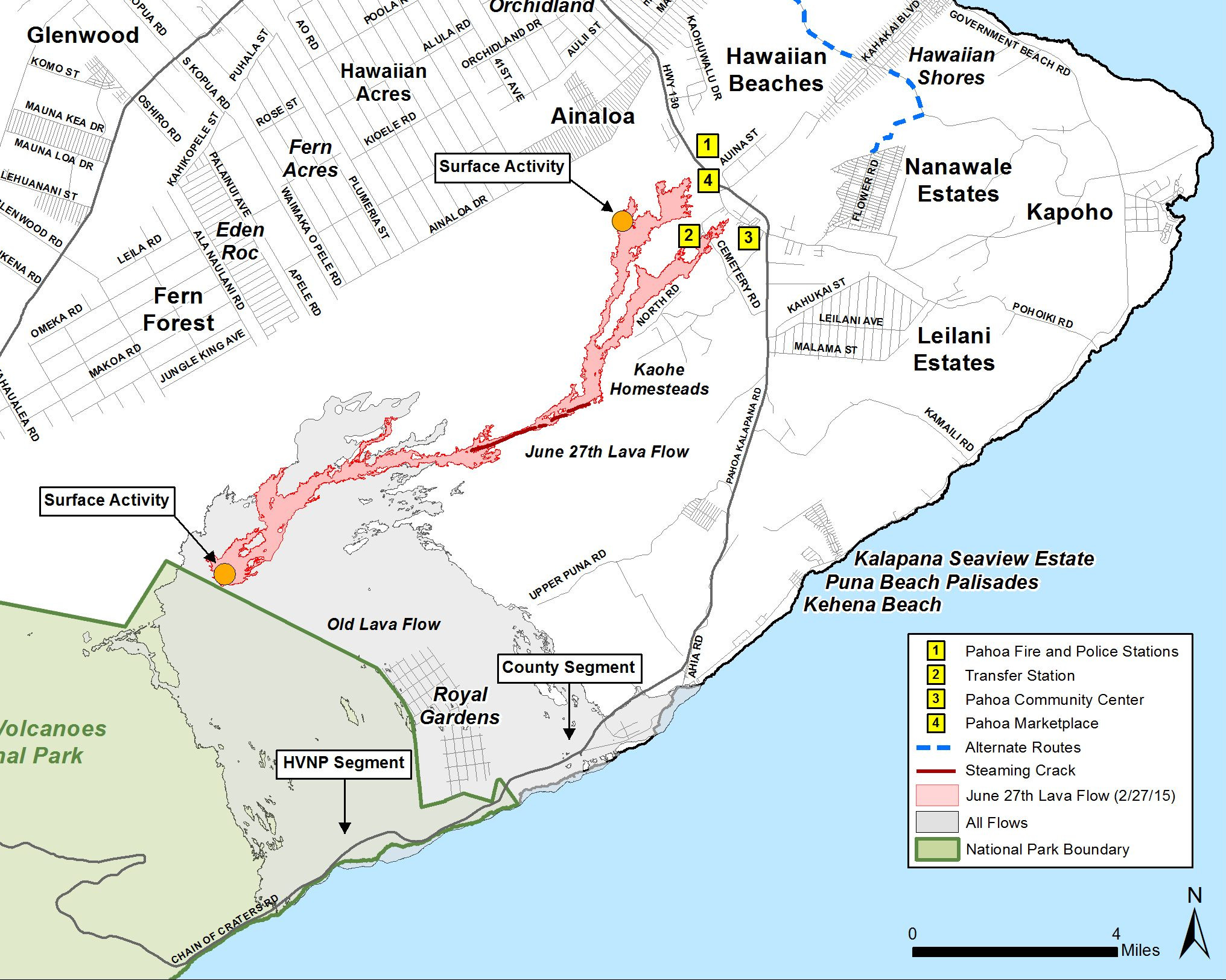 There continues to be very little change in the down slope areas with no advancement noted. Surface activity and activity along both margins extending from the west or just above the flow fronts to the summit area continues with numerous small breakouts. The surface breakouts along the length of the flow pad continues to provide an indication that the tube system is being supplied and lava from the source is making its way to the down slope areas. All current activity does not pose an immediate threat to area communities. The Hawaii County Civil Defense Agency and Hawaiian Volcano Observatory are maintaining close observations of the flow and residents and businesses down slope will be informed of any changes in flow activity and advancement.

Smoke conditions were light with a light northeast wind blowing the smoke in a southwest direction. Smoke conditions may increase in some areas and individuals who may be sensitive or have respiratory problems are advised to take necessary precautions and to remain indoors. 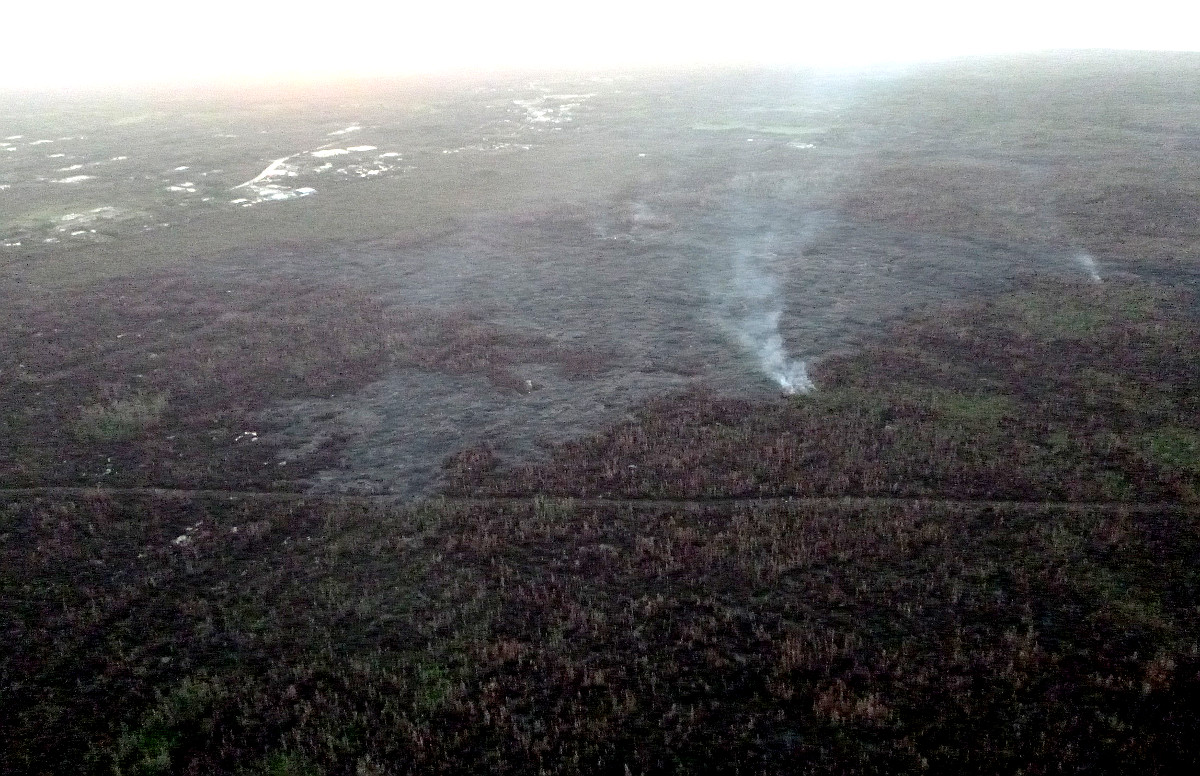 March 3, 2015: Civil Defense image from this morning’s overflight – view from the north flow margin, looking down slope towards Highway 130 and Pahoa Marketplace.

Activity Summary: Kīlauea Volcano continues to erupt at its summit and from its East Rift Zone. The inactive distal tip of the June 27th lava flow remains roughly 500 m (~550 yd) from Highway 130 in the area west of the Pāhoa Fire and Police Stations. Breakouts continue in both the down slope and up slope flow areas. The breakout along the north margin of the stalled flow tip is still active but sluggish, and has not advanced in over a week. The leading edge of this flow is approximately 1.6 km (1 mile) up slope of Highway 130.

June 27th Lava Flow Observations: While the flow continues to widen, no advancement has been observed for more than a week. The lobe on the south side of the flow, about 870 m (0.5 mi) up slope of Malama Market, is no longer advancing, but hosts a few active breakouts several hundred meters upslope of the stalled front. Activity remains on a new breakout that started from the upper June 27th tube on the north flank of Puʻu ʻŌʻō, but activity has diminished steadily since the breakout began. Scattered activity also continues west of Kaohe Homesteads in the same general areas that have been active for about the last month, as well as in a slightly down slope area. Observers on a Civil Defense overflight this morning reported no change in any of the down slope flow areas.

Puʻu ʻŌʻō Observations: The tiltmeter on the north flank of Puʻu ʻŌʻō shows very slight deflationary tilt over the past two days. The rate of sulfur dioxide emission from all East Rift Zone vents was about 220 tonnes per day for the week ending on February 24.

Summit Observations: Tiltmeters operating around the summit continue to record deflationary tilt which started early in the day on Sunday, March 1. The deflation in the summit has been accompanied by lower lava lake levels and occasional spalling of the lava veneer into the lava lake. Some composite earthquakes have resulted. Emission rates of sulfur dioxide were an average of 2000-4000 tonnes/day for the week ending February 24. USGS Hawaiian Volcano Observatory on Mar. 2 at 8:44 p.m. HST 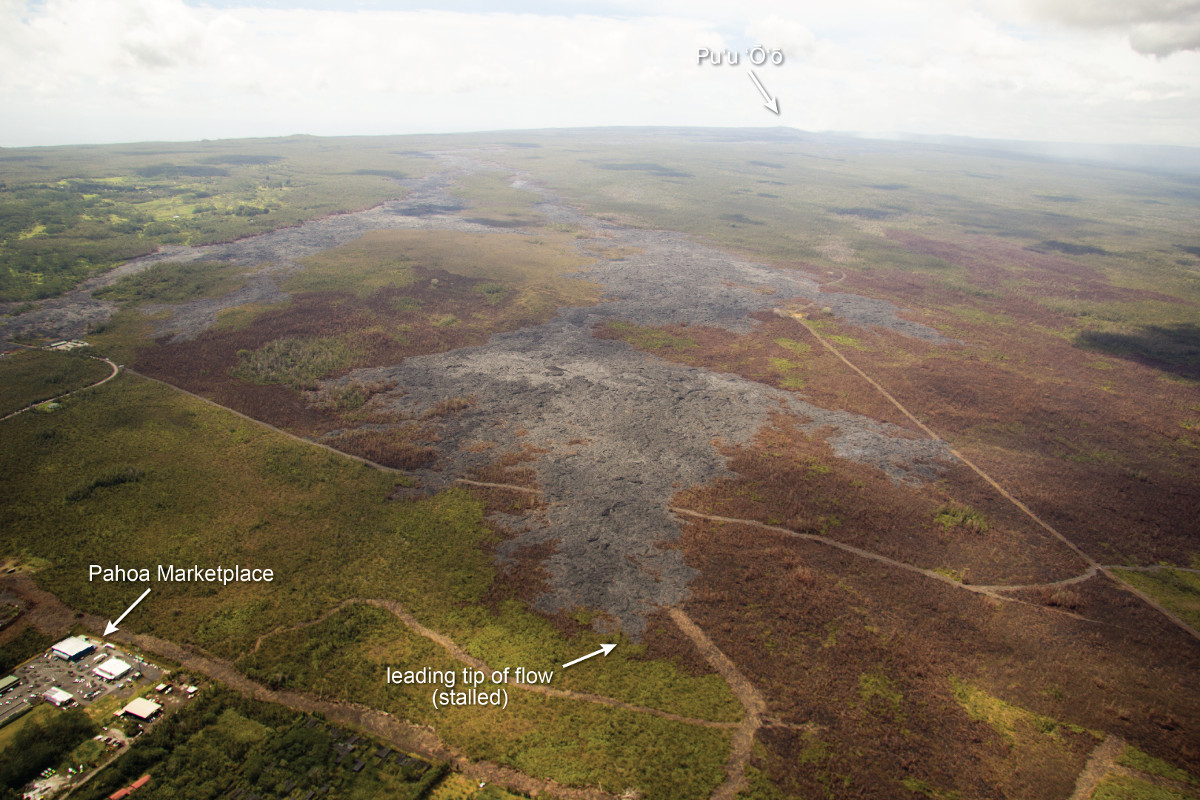