The proposed budget is $17,752,059 or 4.3 percent larger than last year's spending plan, with no increase in property taxes.

As required by the Hawai‘i County Charter, submitted with this message is the proposed operating budget for the County of Hawai‘i for the fiscal year ending June 30, 2016. This balanced budget includes estimated revenues and appropriations of $434,667,890 and includes the operations of eleven of the county’s special funds as well as the general fund.

This fiscal year (FY) 2015-2016 proposed balanced budget is $17,752,059 or 4.3 percent larger than last year’s budget. Our administration has always worked hard to provide public safety, core county services, and much needed investments in infrastructure while working through the realities of the economic climate created by the great recession. This budget reflects our commitment to maintaining the highest level of government services by wisely using county resources to meet the community’s needs.

This budget will not raise property tax rates.

The following table describes the budgeted expenditures for FY 2014-15 and the proposed budget for FY 2015-16 for each fund: 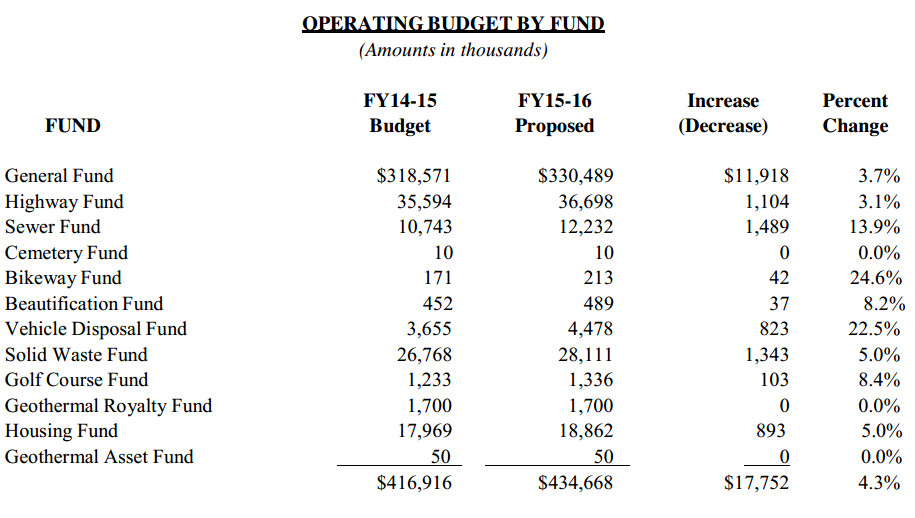 The following table presents a summary of projected FY 2015-16 revenues from various sources and the changes from the current budget: 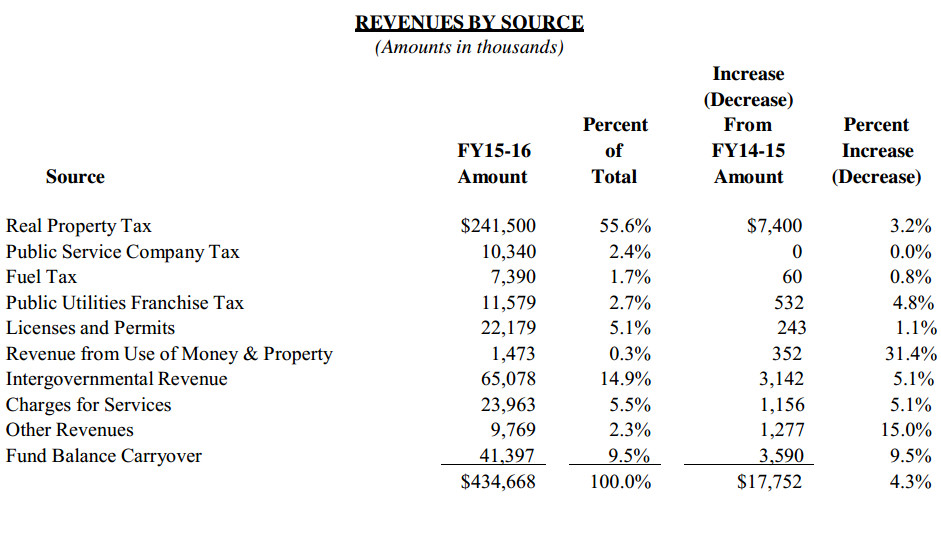 Real Property Tax. Real property tax revenues, including penalties and interest, are expected to increase by 3.2%, or $7.4 million, due to new construction and an increase in taxable values.

Public Utilities Franchise Tax. Increased public utility revenues are expected to result in an increase of $532,000, an increase of 4.8% in franchise tax revenue.

Intergovernmental Revenue. Increased grant revenues of $3.1 million reflect those grants we are aware of at this time.

Charges for Services. Charges for services are expected to increase $1.2 million and reflect the increase in usage of various County services.

Fund Balance Carryover. This budget reflects $3.6 million more in carryover savings from the current year operations for all funds.

The following table presents a summary of projected FY 2015-16 expenditures from various sources and the changes from the current budget: 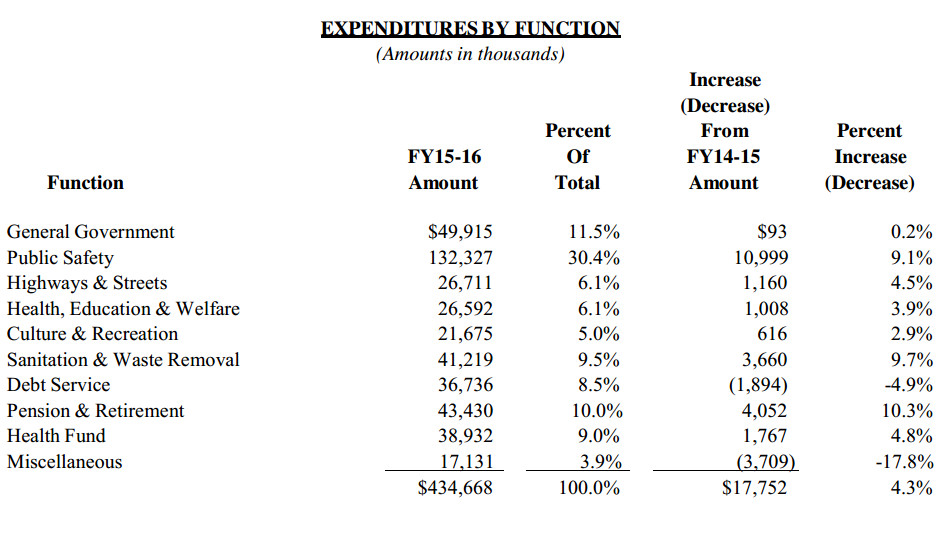 Increases in salary and wages are reflected in all functional areas of county government. After several years of furloughs or no wage increases, new wages were negotiated for all bargaining units represented in the county. All salary and wages are reported in each department with the exception of the few bargaining units with contracts that end on June 30, 2015. The new contracts will need to be approved by the legislature and each County and are estimated in the provision for compensation adjustment account.

Major changes in projected expenditures are as follows:

This proposed budget represents our departments’ best efforts to meet the needs of our growing community in a timely and fiscally responsible fashion. Our administration is committed to investing in our future, maintaining core services and meeting our obligations to our employees.

Our economy is in a state of gradual recovery. We believe our investments in infrastructure, renewable energy, and parks and recreation are critical to the future of Hawai’i Island. We look forward to working closely with the County Council to put forth a balanced budget that ensures public safety and meets the needs of our community.