PUNA - It appears the entire front of the June 27 lava flow has stalled.

PUNA – It appears the entire front of the June 27 lava flow has stalled.

Activity downslope has been diminished for weeks, although breakouts on the flow pad and along the margins persisted. “The surface breakouts along the length of the flow pad continues to provide an indication that the tube system is being supplied,” stated civil defense on a near daily basis, and as recently as Thursday, “and lava from the source is making its way to the down slope areas.”

One breakout on the south margin had advanced a few hundred yards over the last week, and appeared ready to become the new leading edge heading towards the Pahoa Marketplace.

Then suddenly, the breakout stopped, and civil defense noted on Thursday that it “showed no signs of advancement.”

Filming the lava flow from the air on Thursday, Mick Kalber observed, “We saw no active lava anywhere near the flow front… hardly even a wisp of smoke. Both the north and south lobes that have recently been active above Pahoa Town were completely stalled today… as hard as we tried, we could find no lava flowing on the surface downslope.”

The observations seemed to coincide with a new breakout upslope. For the last four days, a breakout from the tube 1.2 miles northeast of Puʻu ʻŌʻō has been active near the forested cone of Kahauale‘a. Also, the February 21 breakout on the northern flank of Puʻu ʻŌʻō was “still active and has begun to make its own lava tube,” USGS Hawaiian Volcano Observatory scientists reported.

“It would appear obvious that the activity upslope is robbing the lava supply from the Pahoa area,” Kalber wrote after filming on Thursday, “since below that point almost no lava activity was noted anywhere.” 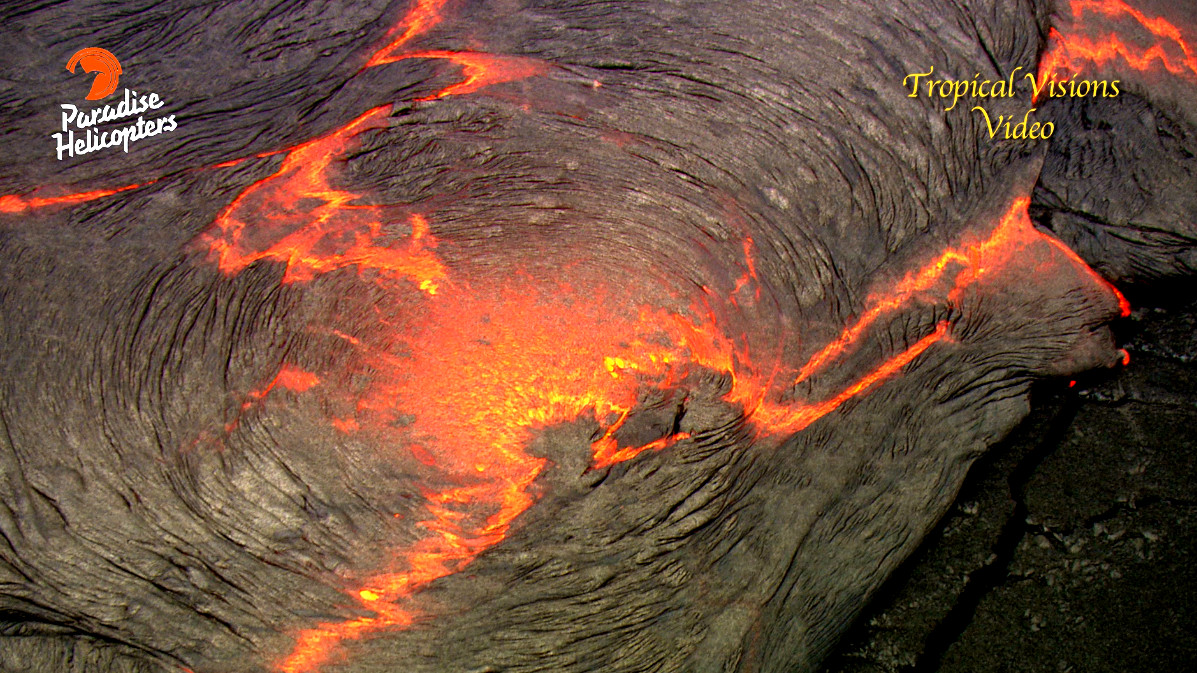 Image from video by Mick Kalber taken over the lava flow on March 12, 2015

Observations on Friday confirmed the front had gone quiet.

“This morning’s assessment showed very little activity in the down slope areas,” civil defense said after their morning overflight.

Scientists agreed that the front “might no longer be active”.

USGS reported that overnight, “no incandescence was recorded by webcams monitoring that area, suggesting that the level of activity may have fallen. This is confirmed by a Hawaii County Civil Defense overflight this morning, which observed no obvious surface activity along the flow from the front to slightly upslope of Kaohe Homesteads. An HVO overflight scheduled for later this morning (weather permitting) will check this with thermal imaging.”