The University of Hawaii is looking to explore the geothermal resources in Kona on volcanic Hualalai.

With land board approval, UH will study ag lands across Hualalai

KONA – The University of Hawaii is looking to explore the geothermal resources in Kona on volcanic Hualalai.

The UH Hawaii Institute of Geophysics and Planetology has applied for a Geothermal Exploration Permit, which needs the approval of the Hawaii Board of Land and Natural Resources. The BLNR meets on Friday and the permit is on the agenda.

The proposed project is part of an overall effort referred to as the “Geothermal Resources Exploration Plan for Hawaii” being undertaken by the applicant. The project is being supported by funding from both the US. Department of Energy and the Department of Land and Natural Resources. The initial focus of the project will be a MT-based assessment of the Hualalai area and is the first exploration permit application being submitted for this project.BLNR submittal 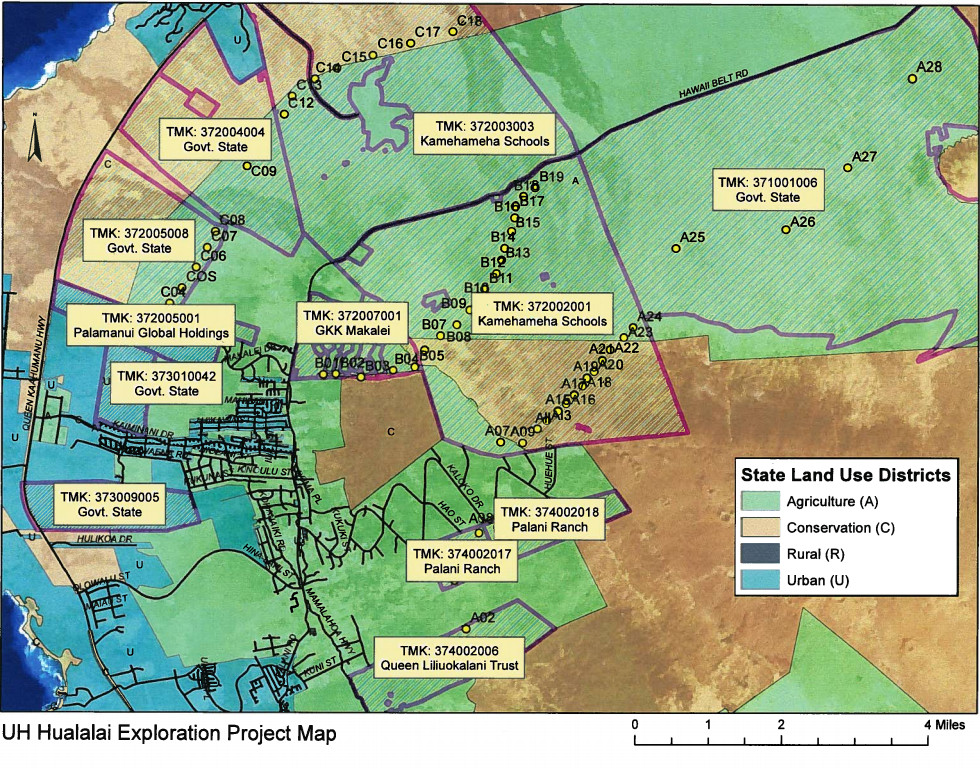 The exploration will take place across nine different agricultural zoned areas on the West Rift Zone of Hualalai. Three are on state lands, two on lands belonging to Kamehameha Schools, two on Palani Ranch, one on Queen Liliuokalani Trust lands, and one on Makalei Golf Club. UH withdrew a request to measure additional sites because they were located in either Urban or Conservation Lands, and would have required costly environmental assessments.

In Exhibit B of the BLNR submittal, UH says the request is “for the purposes of conducting research that will lead to a better understanding of Hawaii’s geothermal resources as well as a better method of mapping underground geologic structures, water resources, and hydrothermal systems.”

Current technology, called magnetotelluric surveys, allows us to map the electrical conductivity of rocks at depths ranging from a few tens of feet below the surface to as much as 20,000 feet below the surface. Because the electrical conductivity of rocks is sensitive to the type of rocks present, the presence (and salt content) of water in the rocks, and the temperature of the rock, the method can identify groundwater aquifers, distinguish between salt water and freshwater aquifers, and distinguish between different types of rocks and can even be used to map underground pockets of magma. Our work will adapt the analysis of the data collected using this method to try to map areas underground where water is flowing: although some geologic formations may have water present, if there are no fractures present in those rocks, then it will be impossible to access the groundwater that is there. The same is true for geothermal systems: the vast majority of geothermal systems in the world are located in regions where water can flow naturally through the heated rock formations. Thermal areas without the necessary fractures have proven to be much more difficult to use for the production of the thermal resource. Having the ability to determine where water flow is occurring in a geothermal system, we will be able avoid drilling exploration holes into “dry’ geothermal systems – both reducing the drilling-related impacts of use of a geothermal resource and reducing the cost to develop geothermal power in productive geothermal systems.UH in Exhibit B of BLNR submittal

The university details the magnetotelluric survey method in the submittal.

Magnetotelluric surveys are considered a passive, non-invasive geophysical investigation. The measurements are called passive because the instruments measure naturally occurring, very low frequency, radio waves that penetrate into the earth. The instruments don’t generate any electrical signals or transmit any energy into the earth, they simply detect and record variations in the electrical voltage signals and radio waves that continuously pass into and out of the earth. Analysis of the variations in the electrical voltage and radio wave energy will enable us to determine the electrical resistivity of the rocks at varying depths below the ground surface and to identify water flow occurring through the ground at varying depths. Those measurements will allow us to infer something about the types of rocks that are present below the ground surface, the water present in those rocks (whether salt or fresh), and the temperatures below the ground surface.

In order to perform a magnetotelluric survey, we use two (in some cases, three) antennas and four specialized contact electrodes with each connected to a data recording system that measures the voltage difference between the pairs of electrodes and records the radio wave signals received by the antennas. The antennas consist of an iron rod that is wrapped with many thousands of tums of fine copper wire, all encased in a fiberglass tube; the electrodes consist of a metal wire suspended in a sodium chloride (table salt) solution contained in a plastic cup with a porous ceramic disk at the bottom for electrical contact to the ground. A photo of the antennas and electrodes, along with the recording box and the cables used is shown on the next page: the orange box is the data recording system; the cylindrical tubes to the left of the box are the antennas; the short cylinders standing at the front right of the data recording system are the electrodes; the smaller diameter cylindrical tubes, to the right of the data recording system in the image, are for shallower measurements and won’t be used in our survey. When placed at a field station, the equipment is laid out similar to that shown in the drawing on the next page: the antennas are placed in shallow trenches, about six inches deep, in the ground and are covered with soil; each electrode is placed inside of a bag containing wet bentonite clay (to ensure good electrical contact with the ground) that is installed in a shallow hole dug to a depth of about twelve inches into the ground; and the cables are strung from the electrodes and antennas back to the data collection system. Because of the extreme sensitivity of the electrodes and antennas, we need to bury them in order to hold them in a fixed location and avoid vibration from wind or rain that would produce electrical “noise” that would interfere with the signals we are trying to record. In areas where shallow trenching is not acceptable, we can weigh down the antennas with sand bags to hold them in a stable configuration. Likewise, we will need to have the cables connecting the electrodes and antennas to the data collection system held in a stable location and, in areas that are heavily vegetated, we may need to clear some Vegetation to allow us to weight the entire length of the cables to the ground with sand bags or soil.

We have four sets of these devices that will allow us to install up to four stations at one time; the measurement stations would be spaced at distances of 1600’ to 3200’ apart over the geologic structure we are surveying. We expect to have each station in place for about three days to collect data we need to perform our analysis. Depending on the size of the area we are surveying, we may need to conduct measurements at as many as 24 locations; this means that we would need to relocate the 4-station set five to six times, at three-day intervals, in order to complete the survey. As the instruments for each station are removed, the electrode holes and antenna trenches will be filled in, the cables and data box recovered, and then relocated to a new survey station. The field crew will be instructed to restore each station site to its original condition as they remove the equipment.UH in Exhibit C of BLNR submittal

The USGS Hawaiian Volcano Observatory says Hualalai is the third-most historically active volcano on the Island of Hawaii.

Though Hualalai is not nearly as active as Mauna Loa or Kilauea, our recent geologic mapping of the volcano shows that 80 percent of Hualalai’s surface has been covered by lava flows in the past 5,000 years. In the past few decades, when most of the resorts, homes, and commercial buildings were built on the flanks of Hualalai, earthquake activity beneath the volcano has been low. In 1929, however, an intense swarm of earthquakes lasting more than a month was most likely caused by magma rising to near the surface. For these reasons, Hualalai is considered a potentially dangerous volcano that is likely to erupt again in the next 100 years.USGS Hawaiian Volcano Observatory