The early morning earthquake was centered about 10 miles northwest of Kailua-Kona at a depth of 6 miles.

KAILUA-KONA – A magnitude-4.5 earthquake rumbled in the ocean off West Hawaii on Easter Sunday, April 5, at 3:23 a.m. According to Wes Thelen, the Seismic Network Manager for the U.S. Geological Survey’s Hawaiian Volcano Observatory, the earthquake was centered about 10 miles northwest of Kailua-Kona at a depth of 6 miles.

The Pacific Tsunami Warning Center determined that no damaging tsunami was generated. The earthquake has caused no detectable changes on the active volcanoes on the Island of Hawaiʻi, USGS says.

Most Big Island residents are asleep at the hour the earthquake occurred, but many still reported feeling it.

The USGS “Did you feel it?” Web site (http://earthquake.usgs.gov/eqcenter/dyfi/) received more than 150 felt reports within two hours of the earthquake. Most of these felt reports were from the west side of the Island of Hawaiʻi, which is consistent with the depth of the earthquake. Only light shaking (Intensity IV) has been reported. At these shaking intensities, damage to buildings or structures is not expected.USGS Hawaiian Volcano Observatory 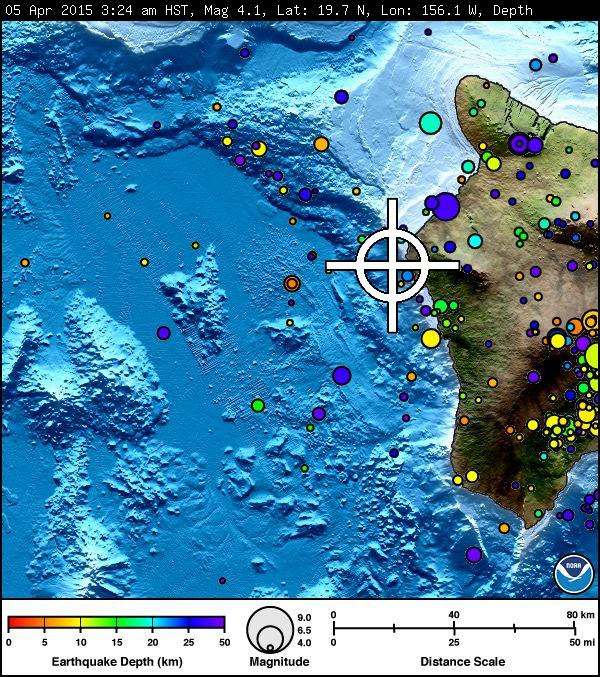 USGS says a magnitude-3.3 earthquake, which occurred near Hawi on the Island of Hawaiʻi approximately 3 hours before the magnitude-4.5 earthquake, is unrelated.

During the past 30 years, there have been 23 earthquakes, including this morning’s event, in this same area offshore of Keahole Point with magnitudes greater than 3.0 and depths of 5–15 km (3–9 mi). Today’s event is the largest earthquake recorded in the area since a magnitude-4.6 earthquake in November 1969.

Earthquakes at this depth off the west coast of the Island of Hawaiʻi are typically caused by abrupt motion on the boundary between the old ocean floor and the volcanic material of the island and are not directly tied to volcanic activity.USGS Hawaiian Volcano Observatory 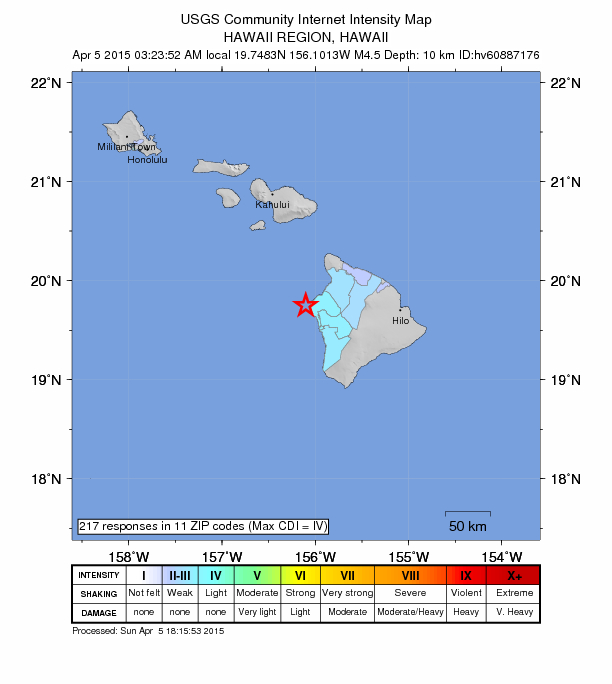