HAWAII VOLCANOES NATIONAL PARK – The lava lake at the summit of Kilauea volcano reached the rim of the Overlook crater vent this morning, “during a period when all spattering stopped, but did not get quite high enough to overflow onto the Halemaʻumaʻu Crater floor,” scientists report.

The USGS Hawaiian Volcano Observatory says there was no significant change in tilt recorded at Kīlauea’s summit over the past day. This week’s rise in the level of the lava lake to record heights has correlated with inflation recorded at the summit; about 7.5 microradians since inflation started on Tuesday, April 21. The radial tilt leveled off into slight deflation on Monday but as of this posting Tuesday morning it has returned to steady inflation. The lava lake remained at a steady 10-13 feet below the rim on Monday.

HVO has installed a new webcam at the Halemaʻumaʻu Overlook. The new angle compliments the four views already trained on the volcano vent at the summit. 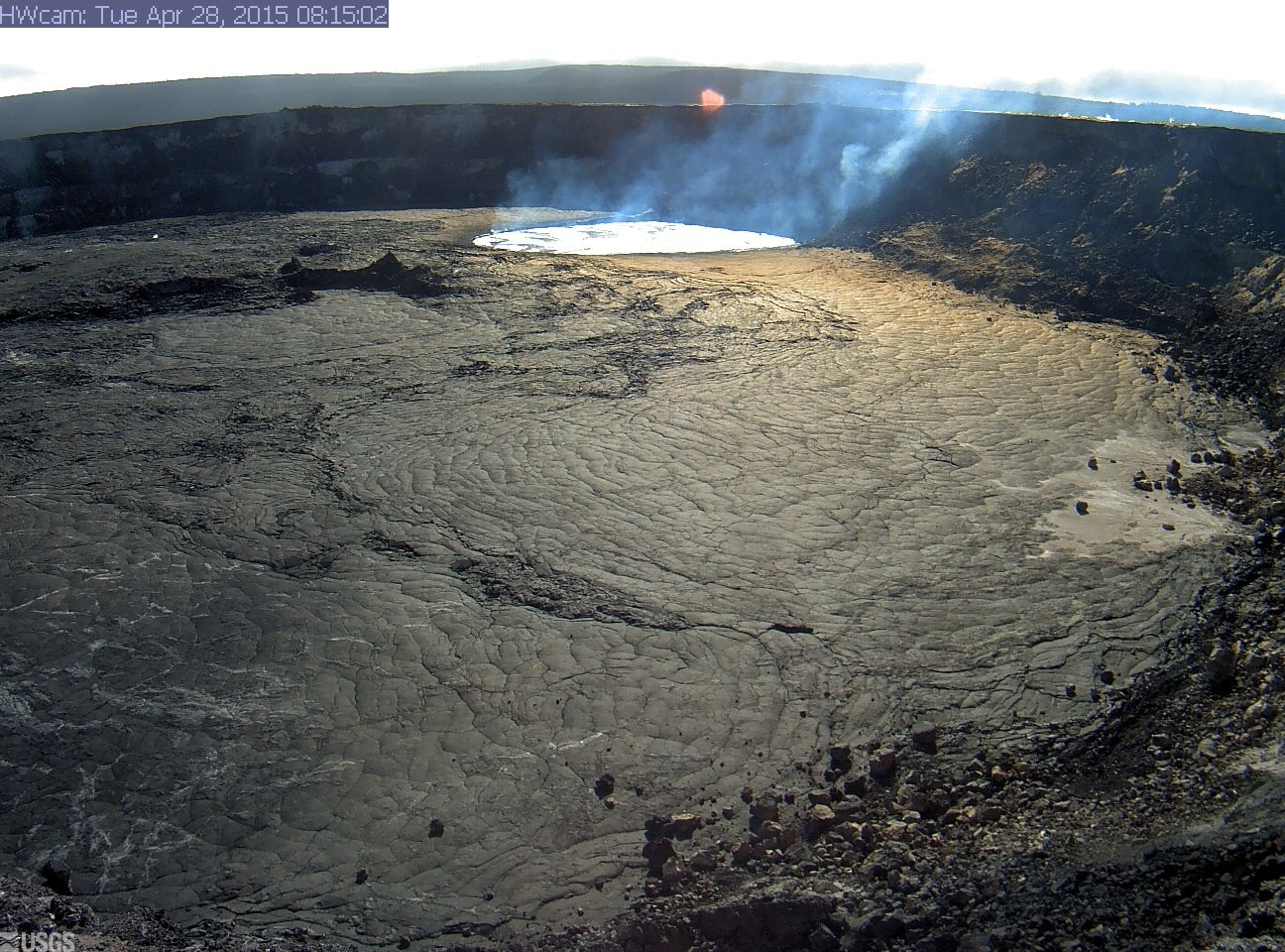 The recent rise of the lava lake within the Halema‘uma‘u Crater vent at the summit of Kīlauea has not resulted in any significant change or increased activity at Pu‘u ‘Ō‘ō. All active flows from Pu‘u ‘Ō‘ō remain within about 5 miles of the Pu‘u ‘Ō‘ō vent, and about 8 miles from the area of Highway 130 near Pāhoa. The team at the USGS Hawaiian Volcano Observatory is maintaining close observations of all volcanic activity and the community will be kept informed of any changes in the level of volcanic threat. Presently, the Kilauea Volcano alert level remains at the WATCH or orange threat level and there is no immediate threat to any down slope communities.Hawaii County Civil Defense on April 28 at 8:03 a.m.

Now that the laval lake is visible to the public, the activity has drawn thousands of additional visitors to Hawai‘i Volcanoes National Park. Over the last several days, hopeful onlookers waited up to 30 minutes or longer to park. Rangers are having to redirect vehicles during peak visitation hours to park at the Kīlauea Military Camp ball field. From there, park officials say visitors can hike one mile to the Jaggar Museum observation deck, the closest and best vantage point to view the spectacular lava lake.

Visitors should come prepared to ensure a safe and enjoyable park experience. We encourage people to avoid peak hours, and arrive after 10 p.m. and before 4 a.m. if possible, or they will likely wait in line for parking. The park remains open 24 hours a day.” Superintendent Cindy Orlando

The National Park Service also offered these tips for an optimal viewing experience:

The public is also reminded that park entrance fees apply and that the use of unmanned aircraft (drones) is prohibited in all national parks. An incident at the park made headlines Monday: rangers tased a park visitor who was operating a drone at the overlook. 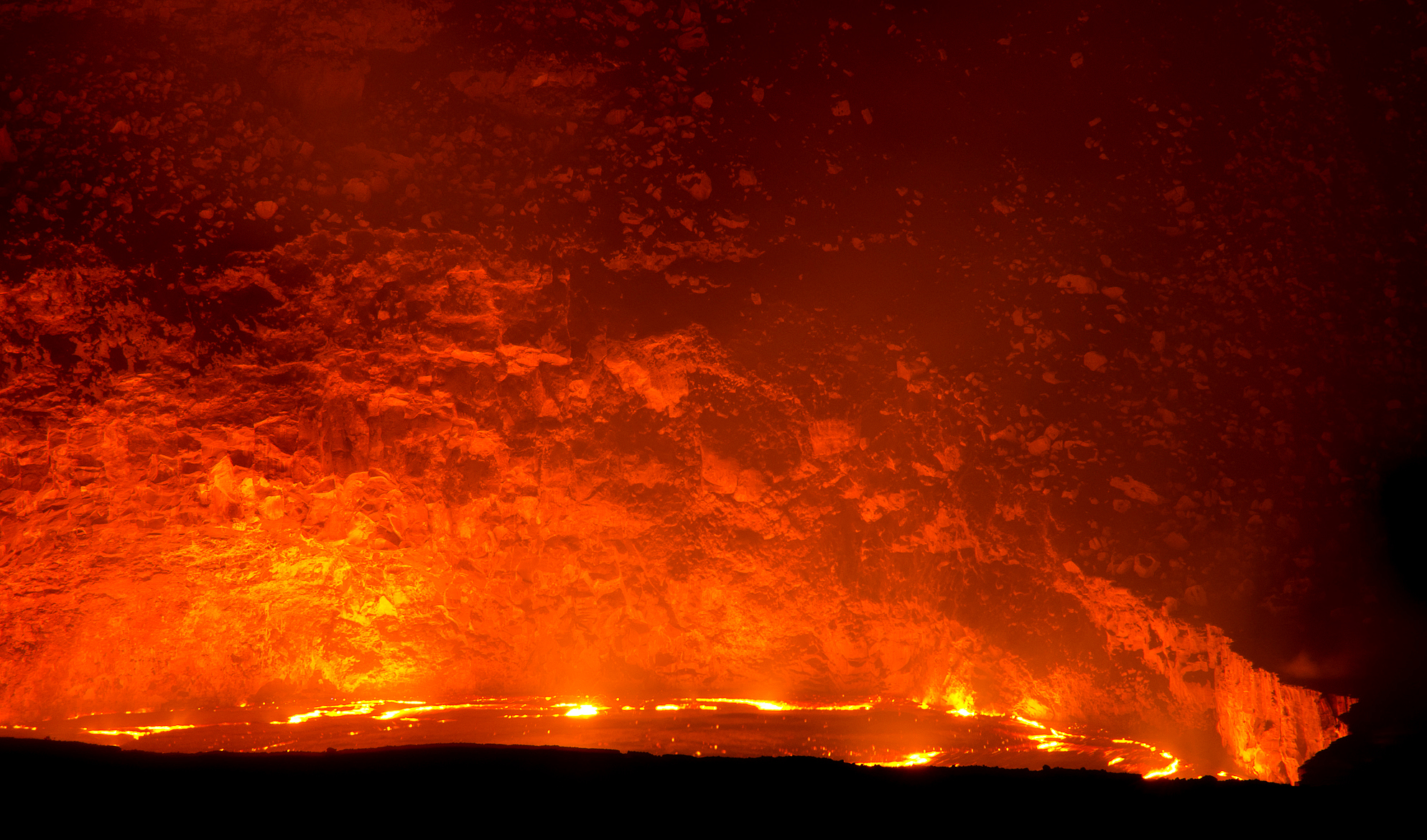