The lava is still contained within the larger Halema'uma'u crater, and is slowly spreading on the crater floor.

HAWAII VOLCANOES NATIONAL PARK – The rising lava lake at the summit of Kilauea volcano has finally spilled over the rim of the Overlook crater. The lava is still contained within the larger Halema’uma’u crater, and is slowly spreading on the crater floor.

The lava lake level has been at or near the rim of the Overlook crater over the past day. At 9:40 pm last night, a very small, brief overflow occurred onto the floor of Halemaʻumaʻu Crater. A larger overflow occurred at 2am this morning, sending lava a short distance onto the floor of Halemaʻumaʻu Crater, and another overflow is occurring this morning around 8am. USGS Hawaiian Volcano Observatory on Wednesday at 8:42 a.m. HST 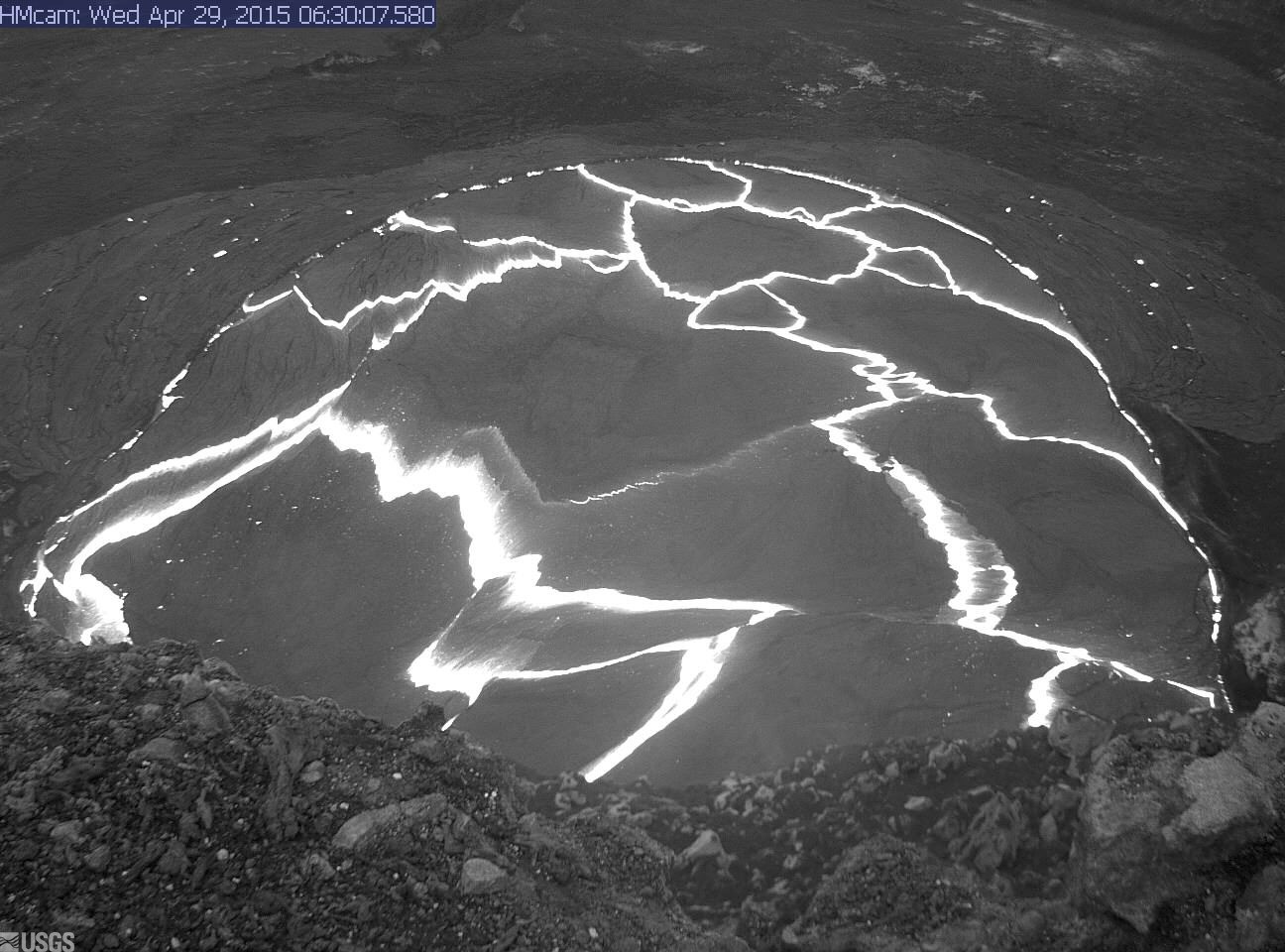 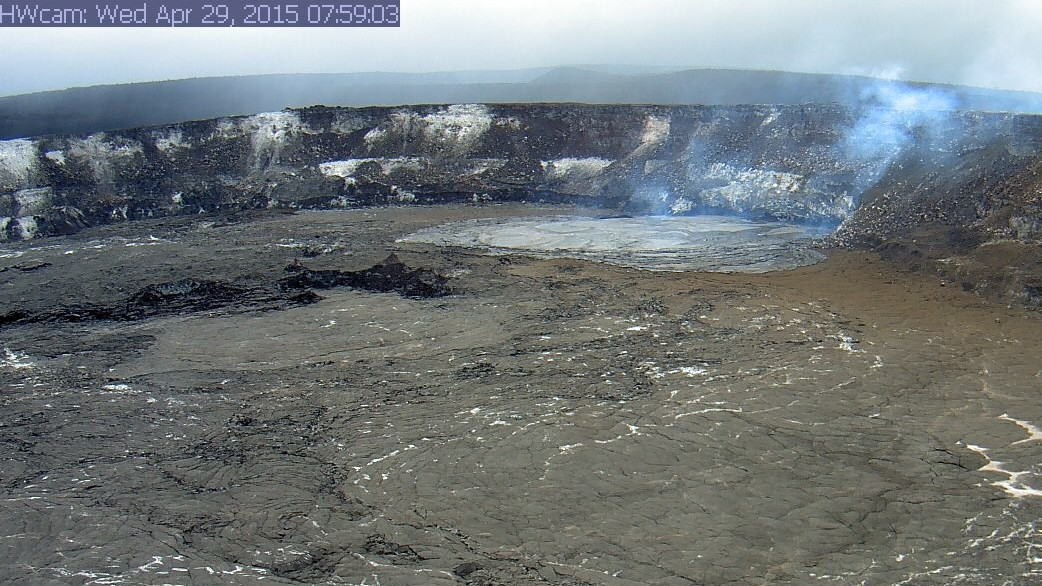 Inflationary tilt continued at Kīlauea’s summit over the past day, scientists say, with the inflation rate decreasing slightly this morning. Seismicity is elevated beneath Kilauea’s summit and upper East and Southwest Rift Zones. That includes a magnitude 3.0 earthquake 2 miles southwest of Volcano at 7:35 a.m. HST and a 3.3 quake 9 miles southeast of Volcano at 9:16 a.m. HST.

The spillover is the latest in a series of volcanic events connected to a rise in the level of the lava lake that began last week in conjunction with an increase in inflation measured at the summit. This is the highest the lava lake has been since the eruption began in March 2008.

Yesterday, a rockwall collapse at Halema’uma’u and the resulting explosive event made headlines. Early this morning (sometime after 1 a.m.), Tim Bryan captured minor explosive spattering at the summit lava lake (video above) while he was filming. The video was taken near the time of the second spillover, although its hard to see that in the video. 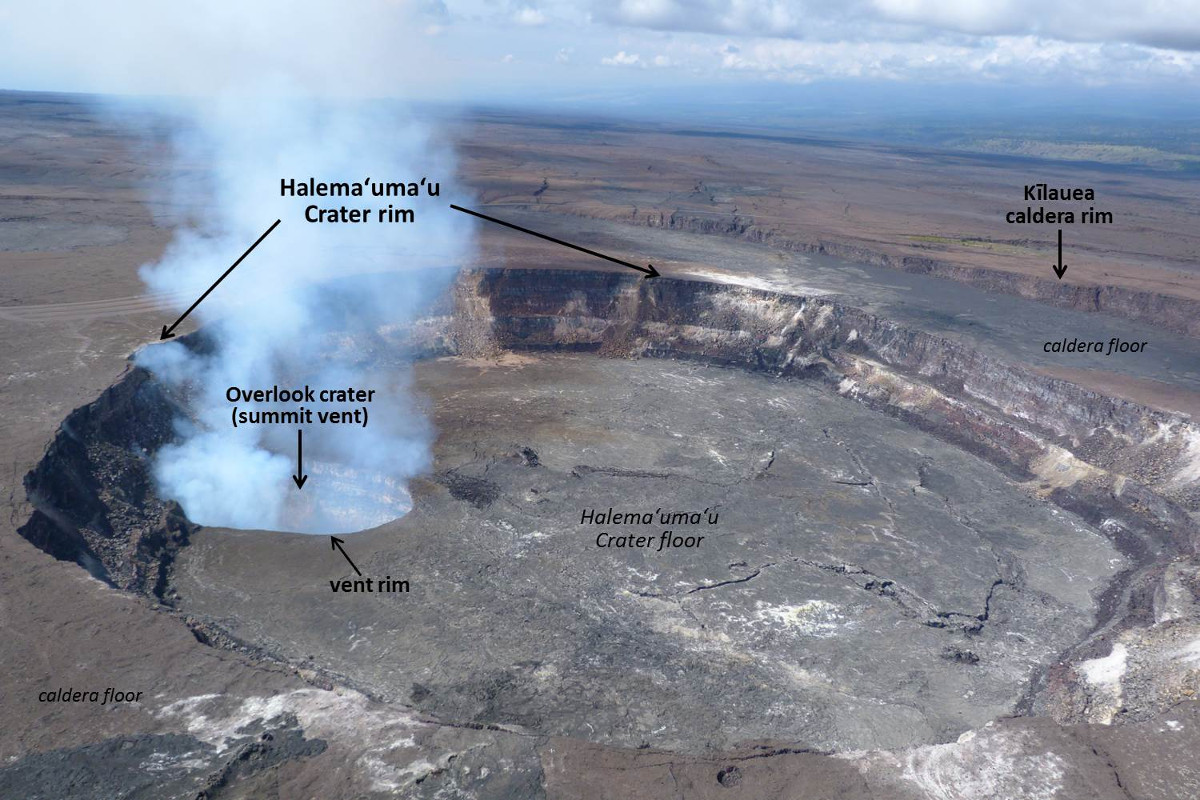 USGS Image: The active vent (Overlook crater) at the summit of Kīlauea Volcano is located within Halemaʻumaʻu, a crater within the volcano’s caldera. The lava lake within the summit vent was about 70 m (230 ft) below the vent rim when this aerial photo was taken on March 6, 2015. Hawaiʻi Volcanoes National Park’s Jaggar Museum is perched on the Kīlauea caldera rim (out of view to the right).