HAWAII ISLAND – A milestone has been reached in the war on the invasive albizia tree, which caused widespread damage in Puna on August 7, 2014 when winds from Hurricane Iselle (Tropical Storm at landfall) toppled them by the thousands across roads and powerlines. Today’s announcement from the Big Island Invasive Species Committee comes just […]

HAWAII ISLAND – A milestone has been reached in the war on the invasive albizia tree, which caused widespread damage in Puna on August 7, 2014 when winds from Hurricane Iselle (Tropical Storm at landfall) toppled them by the thousands across roads and powerlines. Today’s announcement from the Big Island Invasive Species Committee comes just as the 2015 hurricane season gets underway.

The first milestones in a hazard mitigation plan to reduce the threat of albizia across East Hawaii have been reached, according to Bill Buckley, albizia coordinator for the Big Island Invasive Species Committee (BIISC). “This was all sugar cane into the 1990’s, but now some of these trees are 200 feet tall, with massive trunks you can’t wrap your arms around,” Buckley stated, describing the infestation of albizia along the Pi’ihonua Transmission Line. The BIISC crew worked alongside Hawai’i Electric Light contracted arborists to create a 300 foot wide buffer zone on either side of the high power transmission lines supplying electricity to a large portion of the North Hilo and Hamakua districts. The mile-long project, which included the removal or treatment of more than 14,000 albizia trees, took about two months to complete. County Councilman Greggor Ilagan allocated a large portion of County Council contingency funds for the start-up costs for the BIISC albizia crew. “I am glad that BIISC is putting the contingency funds to good use. Tackling this problem now, before the next storm hits, will save millions of dollars in cleanup costs, and possibly a few lives as well,” stated Ilagan, referring to the severe damage inflicted upon Puna by Tropical Storm Iselle in 2014.

Following that storm, stakeholders from all levels of government came together with private landowners at the behest of Senator Brian Schatz to develop a plan for mitigation of the albizia threat. The site at Pi’ihonua was identified as one of 15 critical mitigation projects along primary transmission lines, state highways, and county roads. Using a combination of traditional and innovative management techniques, the team has achieved considerable cost savings, getting the job done at a fraction ofthe cost of similar jobs in past years. “The message we’d really like to get across at this point is how “do-able” this is,” says BIISC Manager Springer Kaye. “The stakeholders who deal with the trees every day developed this strategy, it’s cost effective, and it’s producing long-term results.”

In Puna, Buckley’s team has treated an additional 16,000 trees on 200 acres in the Black Sands subdivision, while hazard trees were managed by project partners, Hawaii Division of Forestry and Wildlife, Hawaii County Department of Public Works, and Hawai’i Electric Light. Impacts are being carefully monitored by researchers at the US Forest Service.

A bill sponsored by Sen. Russell Ruderman for $2.1 mil to fund other portions of the mitigation plan did not make it to the full Senate for a vote this past session, but the legislature did allocate $1.5mil to the Department of Transportation to address the albizia threat along state highways in 2016.

BIISC is offering community training workshops, teaching volunteers to mitigate future hazards by eliminating the fast-growing young trees and notifying landowners of hazard trees threatening structures on public and private property. Workshops are currently scheduled for 9am on june 6 in Leilani Estates and june 20 in Nanawale Estates and Hawaiian Paradise Park.

More information is available at www.biisc.org. 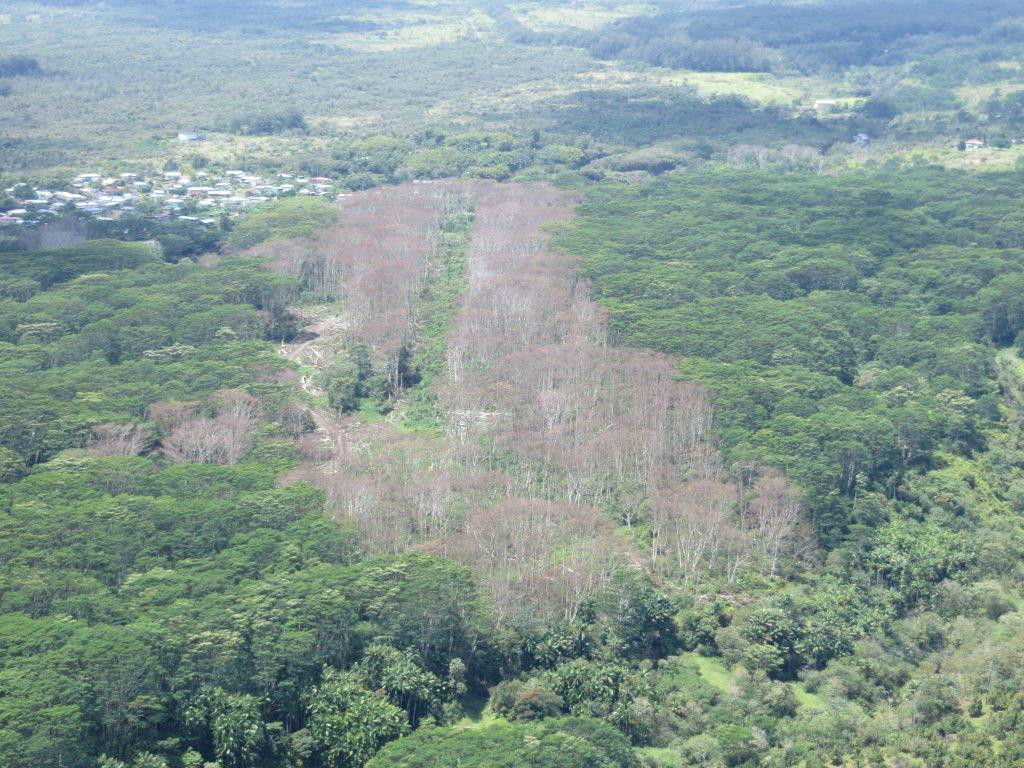