Proponents of Hawaii Island's lowest law enforcement priority for cannabis law suffered a loss at the Hawaii Supreme Court this week. On Thursday, the state's high court struck down an appeal of lower court decisions ruling Hawaii County's voter-approved initiative conflicted with state law. The Hawaii Supreme Court agreed with the Circuit Court and the Intermediate Court of Appeals on the pre-emption.

On Thursday, the state’s high court struck down an appeal of lower court decisions ruling Hawaii County’s voter-approved initiative conflicted with state law. The Hawaii Supreme Court agreed with the Circuit Court and the Intermediate Court of Appeals on the pre-emption.

Here is section 14-99 within Article 16 of Chapter 14 of the Hawaiʻi County Code “Lowest Law Enforcement Priority of Cannabis Ordinance”, which was passed via a ballot initiative by voters in the 2008 election with fanfare and controversy:

(a) The cultivation, possession and use for adult personal use of cannabis shall be the Lowest Law Enforcement Priority for law enforcement agencies in the county.

(c) Neither the chief of police, the police commissioner, nor any attorney prosecuting on behalf of the county, nor any associated law enforcement staff, deputies, nor officers shall seek, accept or renew any formal or informal deputization or commissioning by a federal law enforcement agency for the purpose of investigating, citing, or arresting adults, nor for searching or seizing property from adults for cannabis offenses subject to the Lowest Law Enforcement Priority of cannabis where such activities would be in violation of that policy, nor shall such authorities exercise such powers that may be ancillary to deputization or commissioning for another purpose.

(d) The council shall not authorize the acceptance or the issuing of any funding that is intended to be used to investigate, cite, arrest, prosecute, search or seize property from adults for cannabis offenses in a manner inconsistent with with the county’s Lowest Law Enforcement Priority policy.

Lawsuits were filed in 2011 by a group of cannabis advocates led by Michael Ruggles, whom we spoke to on Friday at his Alternative Pain Management Pu’uhonua in the Fern Acres Subdivision. The complaint alleged a breach of duty on the part of numerous Hawaii County officials for failing to enforce the Lowest Law Enforcement Priority, and requested relief and damages. 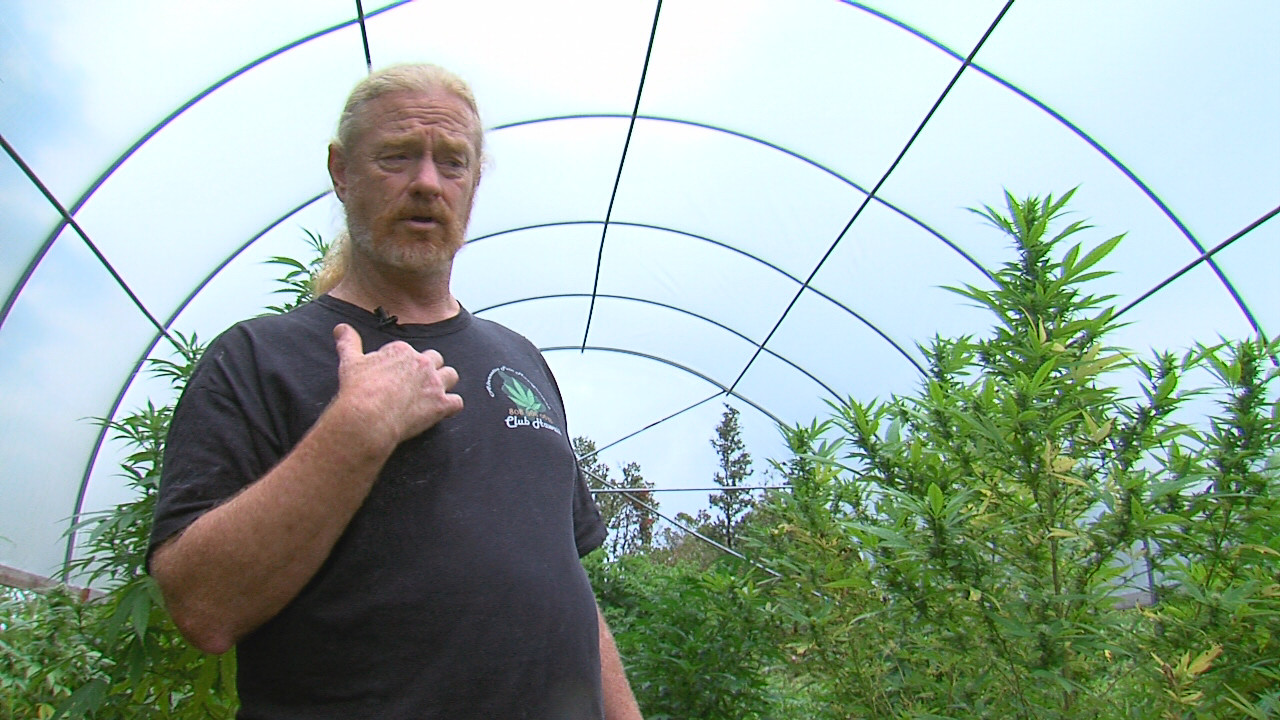 Mike Ruggles talks about the failure of the Lowest Law Enforcement Priority of Cannabis ordinance at the Hawaii Supreme Court.

The opinion of the court, written by Justice Sabrina S. McKenna:

Our case law holds that a municipal ordinance may be preempted by state law “if (1) it covers the same subject matter embraced within a comprehensive state statutory scheme disclosing an express or implied intent to be exclusive and uniform throughout the state or (2) it conflicts with state law.” Richardson v. City & Cnty. of Honolulu, 76 Hawaiʻi 46, 62, 868 P.2d 1193, 1209 (1994) (citations omitted).

We accepted certiorari to clarify that the ordinance in this case is preempted solely because it “conflicts with state law.” It is not necessary to address whether the LLEP “covers the same subject matter embraced within a comprehensive state statutory scheme disclosing an express or implied intent to be exclusive and uniform throughout the state . . . .” – Hawaii Supreme Court on June 25, 2015

There was a dissenting opinion by Justice Michael D. Wilson:

This case concerns judicial review of a county ordinance enacted by Hawaiʻi County voters pursuant to the voter initiative process set forth in the Hawaiʻi County Charter. The ordinance expressly provides that if any of its provisions conflict with state law, the conflicting provisions shall be deemed advisory or be severed, preserving the ordinance as an expression of the will of the people. By application of these corrective provisions to resolve any potential conflict, the ordinance is maintained as an expression of the voters’ view that the investigation and prosecution of certain minor cannabis offenses should be the lowest priority for local law enforcement and that scarce government resources should instead be allocated to “necessities such as education and health care.”

Accordingly, because the corrective provisions preserve the will of the voters and forestall any conflict between the ordinance and state law, I dissent from the majority’s invalidation of the ordinance in its entirety.– Wilson, J. on June 25, 2015

Big Island Video News will have more on Ruggles and his pu’uhonua, in light of recent medical marijuana dispensary laws.