Statements From Both Sides Of TMT Controversy Issued On Oahu

HONOLULU – The self proclaimed protectors of Mauna Kea made a trip to Oahu on Wednesday where they held a press conference at the Kamehameha Statue. Kaho’okahi Kanuha, joined by a crowd of supporters, invited media to record his response to Governor David Ige’s recent statements about the tense situation on the mountain. “Our presence […] 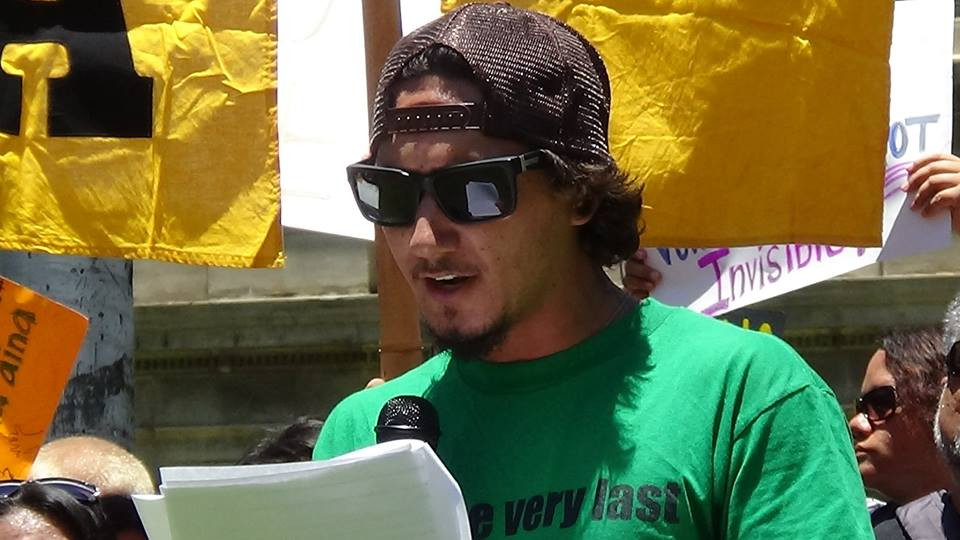 HONOLULU – The self proclaimed protectors of Mauna Kea made a trip to Oahu on Wednesday where they held a press conference at the Kamehameha Statue. Kaho’okahi Kanuha, joined by a crowd of supporters, invited media to record his response to Governor David Ige’s recent statements about the tense situation on the mountain.

“Our presence on the mauna will remain. We are simply going into a time of ho’omalu. To reflect, re-strategize, reform, re-energize, rebuild and reorganize. We are as committed as ever to protecting Mauna a Wakea from desecration.” – Kahookahi Kanuha on July 1, 2015

The press conference was attended by numerous media. Some even livestreamed the event. This video was posted to Youtube by Pono Kealoha.

As of Wednesday, the Mauna Kea Access Road remained closed to the public, and the visitors center was completely shut down, including the bathrooms. Astronomy support is still being allowed up the road. Commercial tours have been canceled.

“It is unclear to us the reason for the continued closure of the road leading up the summit, but it is not because of anything done by the protectors. Employees of the existing telescopes on Mauna a Wakea as well as protectors have been able to access the summit safely without any complications on a daily basis since then.” – Kahookahi Kanuha on July 1, 2015

“Hundreds of tourists continue to access Muana a Wakea on a daily basis without any bathroom facilities. This, I believe, should be a concern for public health and sanitation. Therefore, we have taken it upon ourselves to malama and care for the numerous malahini who have accessed our mauna daily.” – Kahookahi Kanuha on July 1, 2015

“We respect those who choose to exercise their First Amendment rights within the boundaries of the law. What the State cannot allow is for people to take the law into their own hands. Our courts are the proper place for people to seek legal remedies.

Mauna Kea is a protected conservation district, forest reserve and hunting area. While we appreciate the effort of volunteers who helped clean up the summit road, the actions of certain individuals in the past week led to the University of Hawaii’s closure of the road. Deliberately building a rock wall in the middle of a road without warning threatens public safety. Purposely placing boulders in a road could get someone killed. Commercial activities and camping in this protected area without a permit are against State regulations. This is not a statement against the content of the protest, but the conduct.

I am working with the Governor, the University of Hawaii, and the departments of land and natural resources and public safety and will take all lawful steps to see the road re-opened with safe access to all.” – Attorney General Doug Chin on July 1, 2015

The protectors are mindful of the appearance of camping:

“Yesterday we decided to break down what some would consider to be a campsite. Although we have said from the very beginning that we are not on the mountain camping. We are on the mauna to protect it, and protection at this time requires constant vigilance.” – Kahookahi Kanuha on July 1, 2015