MAUNA KEA - An observatory on the summit of Mauna Kea had a hand in the discovery of an exoplanet that is being called a "bigger, older cousin to Earth." The W.M. Keck Observatory helped NASA's Kepler mission confirm the first near-Earth-size planet in the “habitable zone” around a sun-like star, located 1,400 light years away. The discovery is being called a milestone in the journey to finding another “Earth” - or Earth 2.0 as some have taken to calling it.

MAUNA KEA, Hawaii – An observatory on the summit of Mauna Kea had a hand in the discovery of an exoplanet that is being called a “bigger, older cousin to Earth.”

The W.M. Keck Observatory helped NASA’s Kepler mission confirm the first near-Earth-size planet in the “habitable zone” around a sun-like star, located 1,400 light years away. The discovery is being called a milestone in the journey to finding another planet like ours – or “Earth 2.0” as some have taken to calling it. 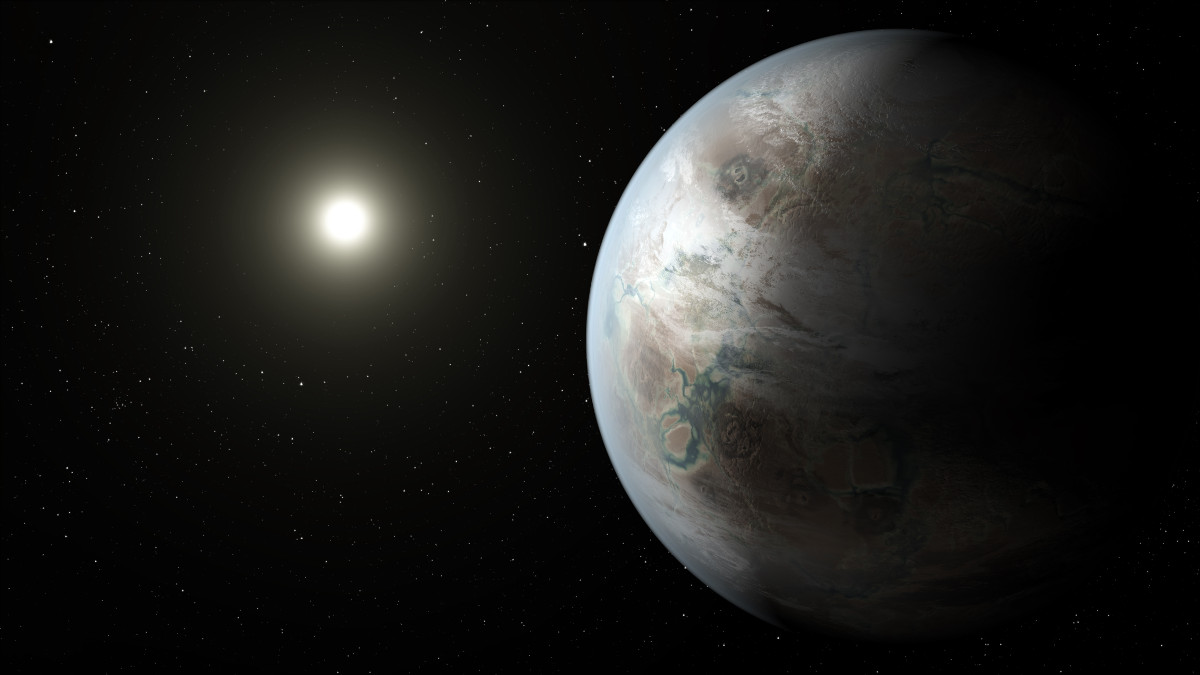 This artist’s concept depicts one possible appearance of the planet Kepler-452b, the first near-Earth-size world to be found in the habitable zone of star that is similar to our sun.
Credits: NASA/JPL-Caltech/T. Pyle

This media release comes from NASA:

The newly discovered Kepler-452b is the smallest planet to date discovered orbiting in the habitable zone — the area around a star where liquid water could pool on the surface of an orbiting planet — of a G2-type star, like our sun. The confirmation of Kepler-452b brings the total number of confirmed planets to 1,030.

“On the 20th anniversary year of the discovery that proved other suns host planets, the Kepler exoplanet explorer has discovered a planet and star which most closely resemble the Earth and our Sun,” said John Grunsfeld, associate administrator of NASA’s Science Mission Directorate at the agency’s headquarters in Washington. “This exciting result brings us one step closer to finding an Earth 2.0.”

Kepler-452b is 60 percent larger in diameter than Earth and is considered a super-Earth-size planet. While its mass and composition are not yet determined, previous research suggests that planets the size of Kepler-452b have a good chance of being rocky.

“We can think of Kepler-452b as an older, bigger cousin to Earth, providing an opportunity to understand and reflect upon Earth’s evolving environment,” said Jon Jenkins, Kepler data analysis lead at NASA’s Ames Research Center in Moffett Field, California, who led the team that discovered Kepler-452b. “It’s awe-inspiring to consider that this planet has spent 6 billion years in the habitable zone of its star; longer than Earth. That’s substantial opportunity for life to arise, should all the necessary ingredients and conditions for life exist on this planet.”

To help confirm the finding and better determine the properties of the Kepler-452 system, the team conducted ground-based observations at the University of Texas at Austin’s McDonald Observatory, the Fred Lawrence Whipple Observatory on Mt. Hopkins, Arizona, and the W. M. Keck Observatory atop Mauna Kea in Hawaii. These measurements were key for the researchers to confirm the planetary nature of Kepler-452b, to refine the size and brightness of its host star and to better pin down the size of the planet and its orbit.

The Kepler-452 system is located 1,400 light-years away in the constellation Cygnus. The research paper reporting this finding has been accepted for publication in The Astronomical Journal.

Twelve of the new planet candidates have diameters between one to two times that of Earth, and orbit in their star’s habitable zone. Of these, nine orbit stars that are similar to our sun in size and temperature.

“We’ve been able to fully automate our process of identifying planet candidates, which means we can finally assess every transit signal in the entire Kepler dataset quickly and uniformly,” said Jeff Coughlin, Kepler scientist at the SETI Institute in Mountain View, California, who led the analysis of a new candidate catalog. “This gives astronomers a statistically sound population of planet candidates to accurately determine the number of small, possibly rocky planets like Earth in our Milky Way galaxy.”

These findings, presented in the seventh Kepler Candidate Catalog, will be submitted for publication in the Astrophysical Journal. These findings are derived from data publicly available on the NASA Exoplanet Archive.

Scientists now are producing the last catalog based on the original Kepler mission’s four-year data set. The final analysis will be conducted using sophisticated software that is increasingly sensitive to the tiny telltale signatures of Earth-size planets. 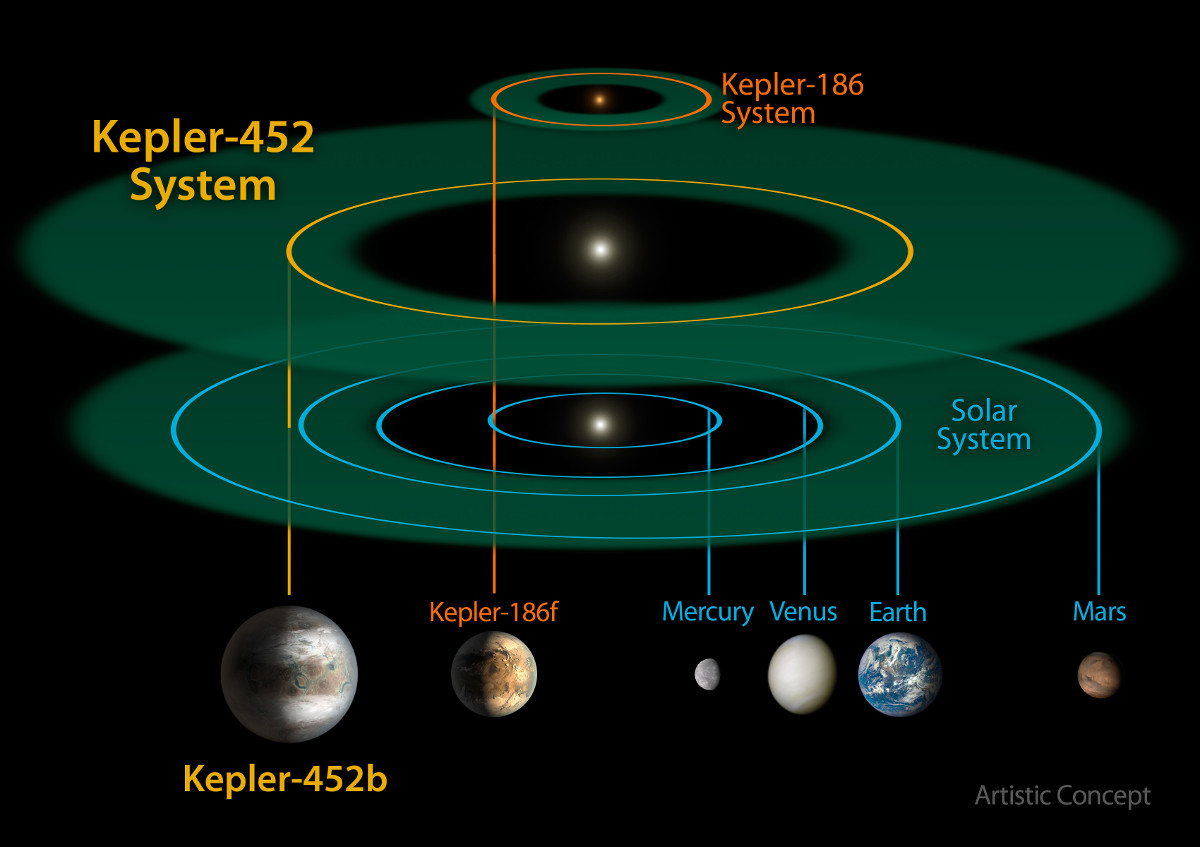 This size and scale of the Kepler-452 system compared alongside the Kepler-186 system and the solar system. Kepler-186 is a miniature solar system that would fit entirely inside the orbit of Mercury.
Credits: NASA/JPL-CalTech/R. Hurt

UPDATE: W.M. Keck also issued a media release detailing their part in the discovery. Here is a portion of that media release:

Specifically, the ten-meter Keck I telescope, fitted with the HIRES instrument was used to confirm the Kepler data as well as to more precisely determine the properties of the star, specifically its temperature, surface gravity and metallicity.

“These fundamental properties are used to determine the stellar mass and radius allowing for precise determination of the planet size,” said Howard Isaacson, researcher in the astronomy department at UC Berkeley and mamba of the discovery team. “With the precise stellar parameters from the HIRES spectrum, we can show that planet radius is closer to the size of the Earth, than say Neptune (~4x Earth’s radius). With a radius of 1.6 times the radius of the Earth, the chances of the planet having some sort of rocky surface is predicted to be ~50%. The Keck Observatory spectrum is also used to rule out false positive scenarios. Background stars can confuses the interpretation of the planet hypothesis, and the Keck Observatory spectrum shows that no such background stars are present.”

HIRES (the High-Resolution Echelle Spectrometer) produces spectra of single objects at very high spectral resolution, yet covering a wide wavelength range. It does this by separating the light into many “stripes” of spectra stacked across a mosaic of three large CCD detectors. HIRES is famous for finding planets orbiting other stars. Astronomers also use HIRES to study distant galaxies and quasars, finding clues to the Big Bang.