Pesticide Ban To Be Considered In Hawaii County 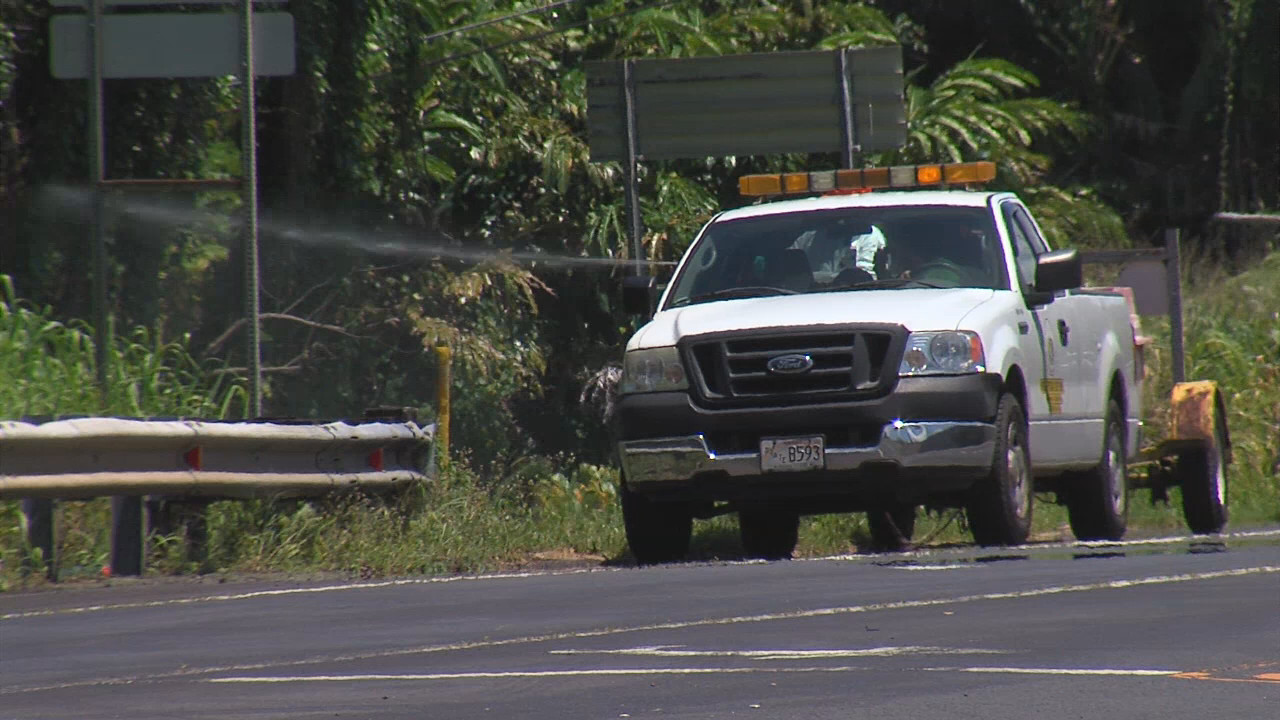 County truck filmed as it apparently sprays Roundup into the weeds along Highway 19 near Paukaa.

HILO, Hawaii – The Hawaii County Council will consider a bill next week that will ban certain pesticides from being sprayed on government grounds.

The Council Committee on Environmental Management will hold a hearing on the bill during its 2:30 p.m. meeting on Tuesday, August 4th in Hilo.

“At the Council’s May 2015 hearings for our County 2015 -2016 budget, the line items of greatest concern were that “Roundup” spray line items in the several department budgets, including those of Parks & Recreation and Public Works. At that time I promised to draft a bill to address the community’s concerns.

As drafted this bill would prohibit the use of toxic herbicides, such as those containing glyphosate (Monsanto’s “Roundup”), on County owned and maintained parks, roadways, waterways, and other county spaces.

The World Health Organization and other health organizations have recently brought forth more evidence concerning the negative effects of glyphosate on human health and to the environment. In my opinion it would be irresponsible to continue to ignore the cries of so many to find alternative means to deal with weeds that are less harmful to our people. To instead simply do another study or to only undertake some pilot project would be doing next to nothing. The proposed bill has an effective date of July 1, 2016 to allow time for the County to transition to alternative means of weed control.” – Margaret Wille

Here is the language of the proposed Bill 71:

BE IT ORDAINED BY THE COUNCIL OF THE COUNTY OF HAWAI‘I:

SECTION 1. Findings. The use of toxic herbicides in public spaces, such as in parks and along roadsides and sidewalks, subjects unknowing persons and other species to a high risk of exposure to dangerous chemicals. There is more and more evidence that cumulative exposure to toxic herbicides, such as those containing glyphosate, is harmful to people as well as to land and water ecosystems.

Alternative ways to manage weeds in a manner that enhances environmental wellbeing are available, including manual removal, planting of cover plants that beautify public ways and roadsides, and other more eco-friendly spray applications.

The scope of this ordinance is limited to County owned or maintained public spaces and easements and waterways and does not affect the use of herbicides on private property.

The effective date of this ordinance is July 1, 2016, in order to provide a transition period to determine which alternative weed management practice would be most effective and economical, as well as using this policy change as an opportunity to partner with organizations in order to enhance roadway beautification projects.

SECTION 2. Chapter 14, Hawai‘i County Code 1983 (2005 Edition, as amended), is amended by adding a new article to be appropriately designated and to read as follows:

“Article . Use of Toxic Pesticides in Hawai‘i County Parks, Roadways, and Other County Spaces and Waterways Prohibited.

The purpose of this ordinance is to decrease the exposure of humans, birds, animals, beneficial insects, and aquatic life to toxic herbicides in public places, roadways, and waterways.

As used in this article, unless otherwise specified:

“Toxic herbicides” means those agents used to dispose of unwanted plants that are not deemed to be “eco-friendly,” including but not limited to those containing glyphosate, 2,4-Dichlorophenoxyacetic, atrazine, dioxin, picloram, bipyridinium, diphenyl ether, and tyrosine breakdown products. All herbicide products that bear a signal label of “dangerous,” “warning,” “toxic to fish,” or “toxic to fish and wildlife,” or that indicate a risk of groundwater contamination, are included as “toxic herbicides.” Herbicide products with only a signal label of “caution” are excluded from the definition of “toxic herbicides.”