The latest forecast for Hurricane Guillermo takes the system over the island chain as a tropical storm. There are no coastal watches or warnings in effect, but a watch is likely to be issued for portions of the state as early as Monday morning. 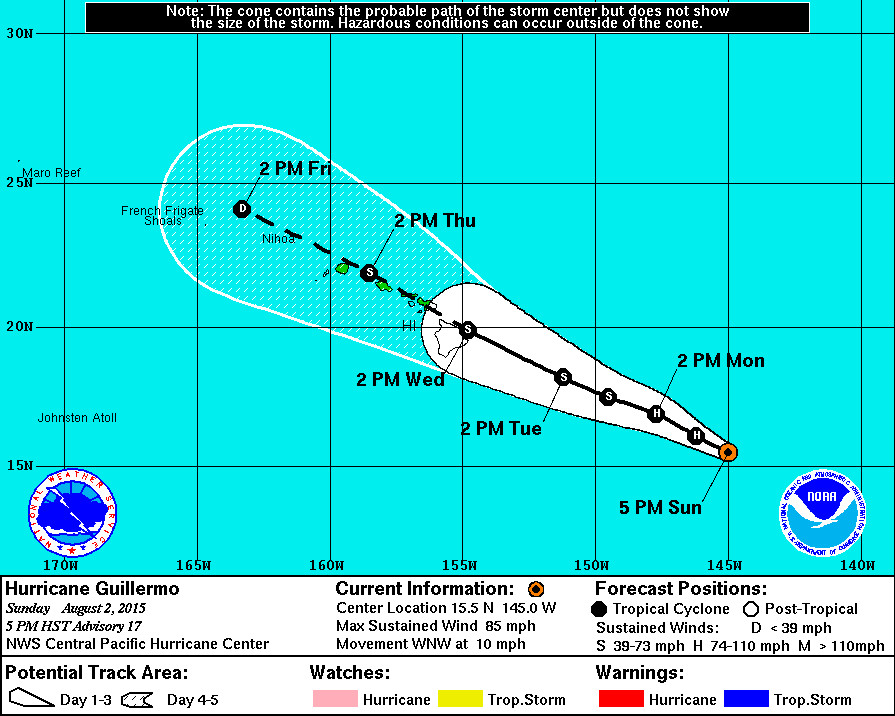 The satellite presentation of Guillermo continues to slowly degrade. Deep convection is pulsing around a difficult to locate center with the most persistent cold tops confined to the northeast quadrant. A 2346 UTC SSMI pass and a 0013 UTC AMSU pass were helpful in determining a center position. Dvorak current intensity estimates were 5.0/90 kt from SAB and 4.5/77 kt from HFO and JTWC… While final t numbers were lower at 4.0 to 4.5. CIMSS Adt suggested 70 kt… And given reconnaissance data from earlier in the day… The official intensity has been lowered to 75 kt.

The initial motion is toward the west-northwest… Or 295 degrees… At 9 kt. A low level ridge sits about 1500 nm to the northwest of Guillermo… While a North Pacific upper level trough has carved out a weakness in the mid to upper level ridge just north of the hurricane. Guillermo will continue to move on a similar bearing for the next few days into the weakness aloft… Taking the system near or possibly over the Hawaiian Islands on Wednesday and Thursday. The track forecast has been changed little from the last advisory and remains near a rather tight cluster of GFS… ECMWF… And the consensus models. The HRWF has moved back slightly closer to the consensus… While the GFDL continues to send a stronger system northward on Wednesday.

Weakening is expected to continue through the forecast period. As Guillermo continues to move into the break in the mid to upper level ridge… Outflow within the northwest quadrant will become disrupted further and vertical wind shear will slowly increase. The rate of weakening has been changed little since the last advisory… And the forecast closely follows the icon… With SHIPS predicting more rapid weakening beyond 48 hours.

As Guillermo moves closer to Hawaii… Watches may be issued as early as Monday morning for portions of the state. However… It is still too soon to determine with certainty which islands are most likely to experience the greatest impacts from Guillermo. It is also important to note that significant impacts can extend well away from the center.

The NOAA G-IV jet conducted a synoptic mission north of Guillermo earlier this afternoon. This sampling should improve the model initialization of the environment affecting Guillermo. The next G-IV mission is scheduled for tomorrow morning… And the next U.S. Air Force mission into Guillermo is scheduled for this evening.