Hurricane Guillermo Begins To Weaken On Path To Hawaii

Hurricane Guillermo Update – 11:30 a.m. Hurricane Guillermo is 790 miles east southeast of Hilo, Hawaii. The storm is moving west northwest and its forward progress has slowed a bit to 10 mph. Guillermo is now a Category 1 hurricane. Maximum sustained winds are now 90 mph with higher gusts, indicating that the storm’s weakening […] 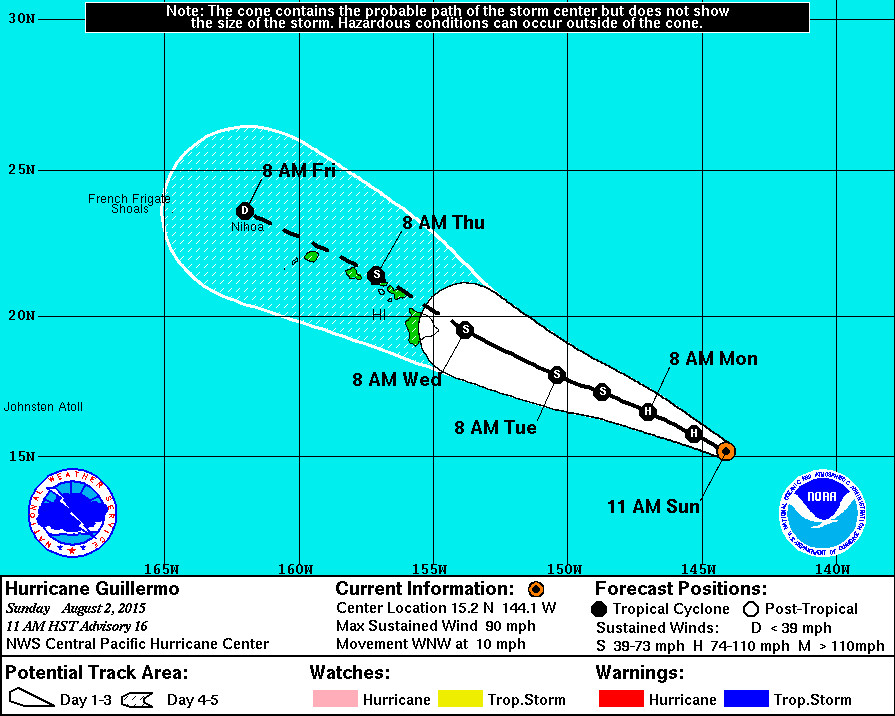 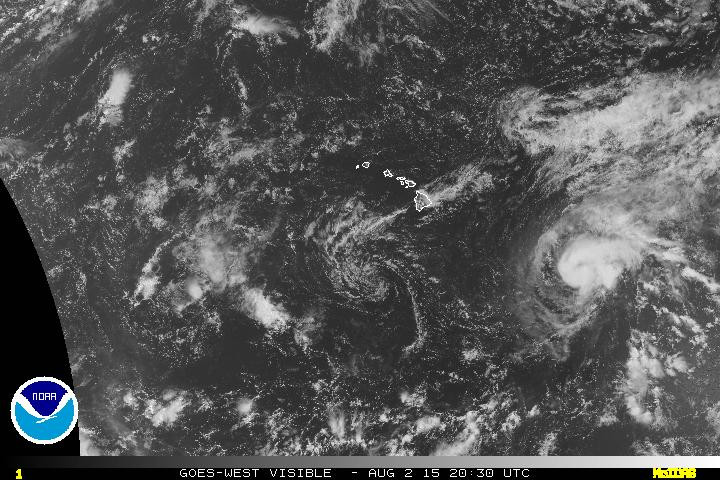 Increasing northwesterly upper level winds have begun to affect Guillermo… And its satellite presentation has become increasingly ragged this morning. The U.S. Air Force 53rd Weather Reconnaissance Squadron conducted its first reconnaissance mission… And their data has been critical in locating the center… Determining the current intensity… And adjusting the wind radii. Dvorak current intensity estimates range from a high of 5.0/90 kt from sab to 4.5/77 kt from HFO…JTWC…And CIMSS adt. Reconnaissance found a maximum flight level wind in the northeast quadrant of 81 kt… Which suggests a surface wind of 73 kt. Given the uncertainty of whether or not the maximum wind was sampled… The initial intensity will be lowered to 80 kt… Though this is likely generous.

The initial motion is toward the west-northwest or 300 degrees at 9 kt as Guillermo has begun to make a turn toward the northwest. The hurricane has been moving toward the west-northwest along the western end of a deep subtropical ridge to the north and northeast. A weakness in the ridge aloft is being slowly carved out north of Guillermo by a deepening north Pacific upper level trough. In response… Guillermo has begun to slowly move on a more northwestward track into the break in the ridge. Guillermo is expected to continue to move toward the northwest through the forecast period… Placing it near the Hawaiian Islands by Wednesday. The updated track has been changed little from the last advisory and is near a rather tight cluster of the reliable dynamical models and the consensus models. Notable outliers deviate on Wednesday and beyond. By Wednesday… The HRWF takes a much weaker and shallower Guillermo farther south… And the GFDL carries a stronger system to the north of most guidance.

Weakening is expected to continue through the forecast period. As Guillermo continues to move into the break in the mid to upper level ridge… Outflow within the northwest quadrant will become disrupted further and vertical wind shear will slowly increase. Guillermo has been weakened more aggressively compared to the last advisory due to reconnaissance data and the recent satellite presentation. The forecast closely follows IVCN and SHIPS through 72 hours… With ships weakening Guillermo faster on days four and five.

At this time… It is important for those in the main Hawaiian Islands not to focus too closely on the exact forecast track of Guillermo. With an average 72 hour forecast track error of about 150 statute miles… It is still too soon to determine with certainty which islands most likely to experience the greatest impacts from Guillermo. It is also important to note that significant impacts from tropical cyclones can extend well away from the center.

The NOAA G-IV aircraft will conduct a synoptic sampling mission north of Guillermo during its transit to Hawaii this afternoon. This sampling should improve the model initialization of the environment affecting Guillermo. The next U.S. Air Force mission into Guillermo is scheduled for this evening. 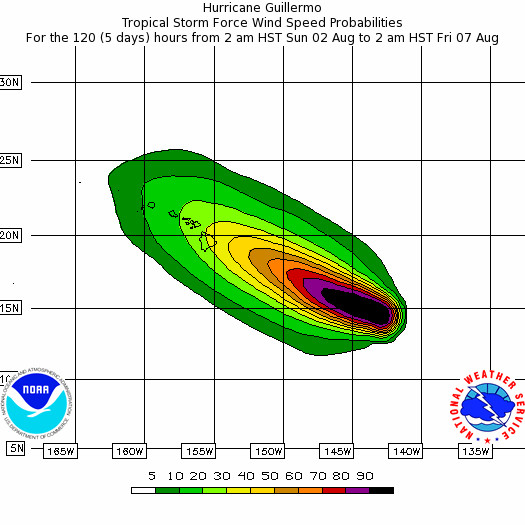