As of 5 a.m. HST Guillermo was downgraded to a Tropical Storm, 630 miles east southeast of Hilo, Hawaii. The storm is moving west northwest at 10 mph. A High Surf Advisory is now in effect for east facing shores of all islands. Surf is forecast to be 10 to 14 feet through Tuesday. 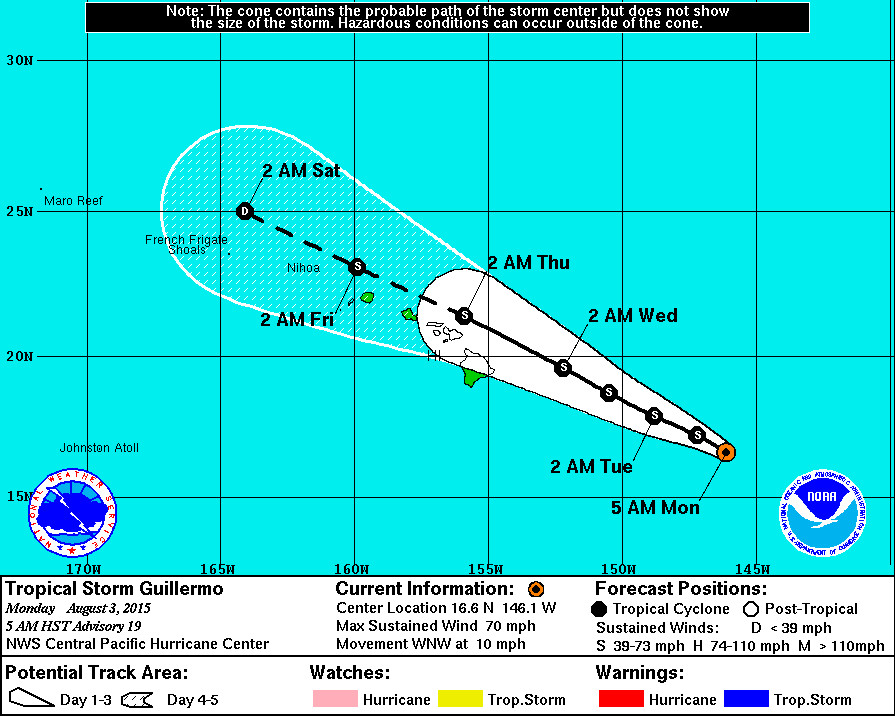 Latest infrared satellite imagery continues to show a ragged appearance to Guillermo… With deep convection struggling to remain over the low level circulation center due to increasing westerly wind shear aloft. The U.S. 53rd Weather Reconnaissance aircraft while sampling the inner core of Guillermo last evening… Failed to find flight level or surface winds of 64 knots or greater. The most recent Dvorak classifications were 4.0/65kt from phfo… JTWC and SAB… While final t numbers were lower at 3.5. Additionally… The advanced Dvorak technique from UW-CIMSS indicated a current intensity t number of 4.0 and a final t number of 3.5. Relying heavily on the fact that the aircraft failed to find 64 knot winds during the mission last evening through Guillermo… Along with a 1220z ssmi microwave pass showing a well defined circulation center but no thunderstorms in the southwest quadrant… And the continued ragged presentation in infrared satellite imagery… The 1500z intensity will be lowered slightly to 60 knots. As a result… Guillermo has weakened to tropical storm status.

The initial position of the system was heavily weighted on a couple center fix positions from the aircraft mission last evening along with extrapolation using infrared satellite imagery. As a result… The current motion is toward the west-northwest… 300 degrees… At 9 knots. This general motion is expected to continue for the next couple of days as the system is guided by a large surface ridge nearly 1600 nm to the northeast of the main Hawaiian Islands and a weakness in the ridging aloft running roughly southeast to northwest just to the north of the system. The latest model guidance has shifted toward the right or north of the previous forecast track… Likely the result of the improved sampling of the system by the NOAA G-IV aircraft on its synoptic sampling mission sunday afternoon. The spread amongst the models has also increased in the first 48 hours of the forecast… With quite a bit of spread continuing through the forecast period. As a result…We heavily relied on a combination of the TVCN… GFS… And the HWRF solutions with a sizeable weight placed on the previous official forecast. The new official forecast track shows a slight shift to the right or north from the previous forecast advisory.

The latest Uw-cimss vertical wind shear analysis showed 14 knots from 270 degrees… While the latest Ships analysis showed 16 knots from 285 degrees. This is likely responsible for the continued ragged satellite presentation and the weakening of the system since the previous advisory. Slow but steady weakening is expected to continue through the forecast period. As Guillermo continues to move into the weakness in the mid to upper level ridge… Outflow within the northwest quadrant will become further disrupted and vertical wind shear will slowly increase. The intensity forecast closely follows the icon… With Ships predicting more rapid weakening beyond 48 hours. The forecast and initial wind radii were adjusted based on the aircraft data last evening and the current intensity trends of Guillermo.

As Guillermo moves closer to Hawaii…Watches may be issued later today or tonight for portions of the state. However… It is still too soon to determine with certainty which islands are most likely to experience the greatest impacts from Guillermo. It is also important to note that significant impacts can extend well away from the center.

Another reconnaissance aircraft mission into Guillermo is scheduled for this morning. The valuable data transmitted in real-time from these missions will help us to better determine the location… Intensity and size of the tropical storm. In addition… The NOAA G-IV jet is scheduled to conduct another synoptic sampling mission around Guillermo this afternoon. This sampling should help improve the model initialization and improve the model forecast tracks for Guillermo.