Tropical Storm Guillermo is just below hurricane strength, with maximum sustained winds at 70 mph with higher gusts. Little change in strength is expected through Wednesday morning, with slow but steady weakening anticipated thereafter. "It is not out of the question that Guillermo could become a hurricane over the next 12 hours," NWS reiterated in the 5 a.m. discussion. 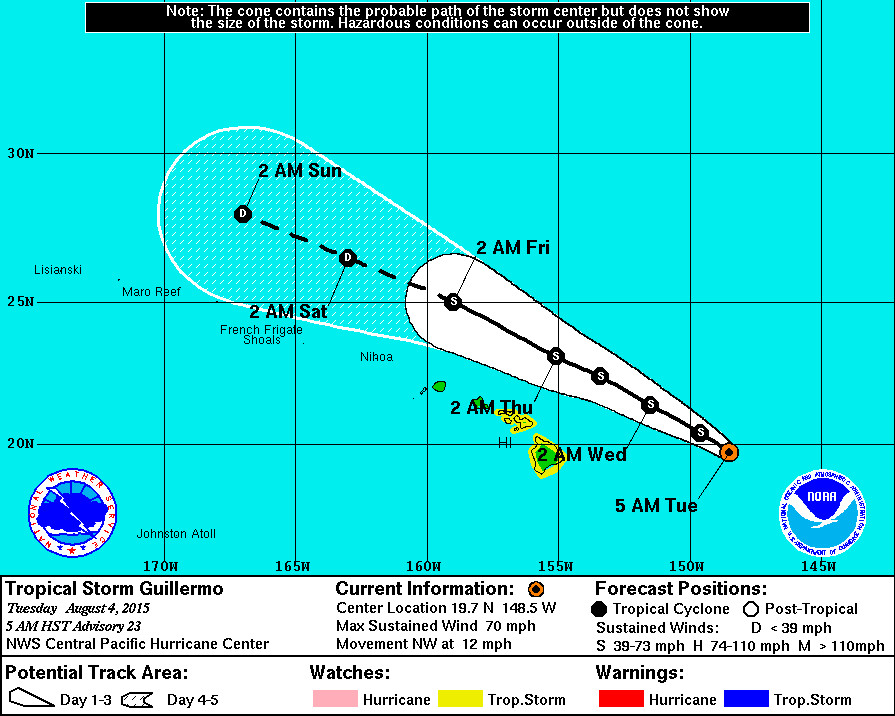 The latest infrared satellite presentation of Guillermo has degraded in appearance since the last advisory…With warming cloud tops and a reduction in the thunderstorm activity. The latest Uw-cimss vertical wind shear analysis indicates 25 knots of shear from 270 degrees… And this is likely responsible for the deep convection having difficulty maintaining itself near the low level circulation center of guillermo. Despite the vertical wind shear present over the system… Dvorak classifications from Phfo and Jtwc continue to indicate t numbers of 3.5 or 55 knots…And 3.0 or 45 knots from sab. Advanced dvorak technique (adt) also indicates a t number of 3.6 or 57 knots as of 04/1300z. The final decision on the initial intensity was once again based on data from the u.S. 53rd Weather Reconnaissance Aircraft which sampled the inner core of Guillermo earlier this morning. The aircraft found max flight level winds of 73 knots…25 nm east of the center of circulation. Adjusting the flight level winds from the 850 mb flight level… Yields surface winds of 58 knots. Additionally… Sfmr data from the aircraft indicated surface winds of around 60 knots in the ne and nw quadrants of the storm. As a result… The initial intensity of Guillermo was kept just below hurricane strength at 60 knots… Utilizing a blend of the flight level and sfmr winds from the aircraft.

The initial position of the system was based on satellite extrapolation from earlier center fix positions from the reconnaissance aircraft… With an initial motion toward the northwest… Or 320 degrees at 10 knots. The latest model guidance changed very little from the previous advisory package… Likely resulting from better initialization of the motion of the system. The motion of Guillermo appears to be driven largely by the strength of the vertical wind shear as well as a weakness in the mid-upper level ridge which extends from Guillermo off to the northwest to a location near 30n157w. The weakness in the ridge in combination with the deep layer flow is keeping Guillermo on a track off to the northwest at the current time. As a result… The official forecast follows a direction on the north side of the guidance envelope through 24 hours which assumes maintenance of deep convection and interaction with the weakness in the mid-upper level ridge. Beyond 24 hours as westerly wind shear is forecast to increase significantly over the system… Convection should become increasingly shallow… And the official forecast shows a shift toward the west-northwest which is very close to the Gfs and Tvcn tracks and slightly to the north of the previous official forecast. On this track… The closest approach of Guillermo remains well to the northeast of all the Hawaiian Islands. The Tropical Storm Watch for the Big Island and Maui County was maintained with this advisory package… But if the motion of the system continues… The watches may be cancelled later today.

The intensity forecast for Guillermo is a blend of icon and hwrf intensity guidance along with weight given to the previous official forecast. The global models are showing the potential for some slight strengthening through this evening… As shear remains nearly unchanged. Vertical wind shear is then forecast to further strengthen over the system tonight… And this should lead to steady weakening of guillermo through the remainder of the forecast. Given the favorable sea surface temperatures of around 82 degrees fahrenheit based on modis data from yesterday afternoon… It is not out of the question that Guillermo could become a hurricane over the next 12 hours. The official intensity forecast will show little change in strength however over the next 12 hours… Then show slow but steady weakening through 120 hours.

Another reconnaissance aircraft mission into Guillermo is scheduled for 18z this morning. The valuable data transmitted in real-time from these missions will help us to better determine the location… Intensity and size of the tropical storm… Along with any potential impacts to the Hawaiian Islands.