Ignacio Becomes Hurricane, May Get Stronger

HAWAII: Ignacio is now a hurricane and forecasters say it could become a major hurricane by the end of the week as it continues a track towards Hawaii. 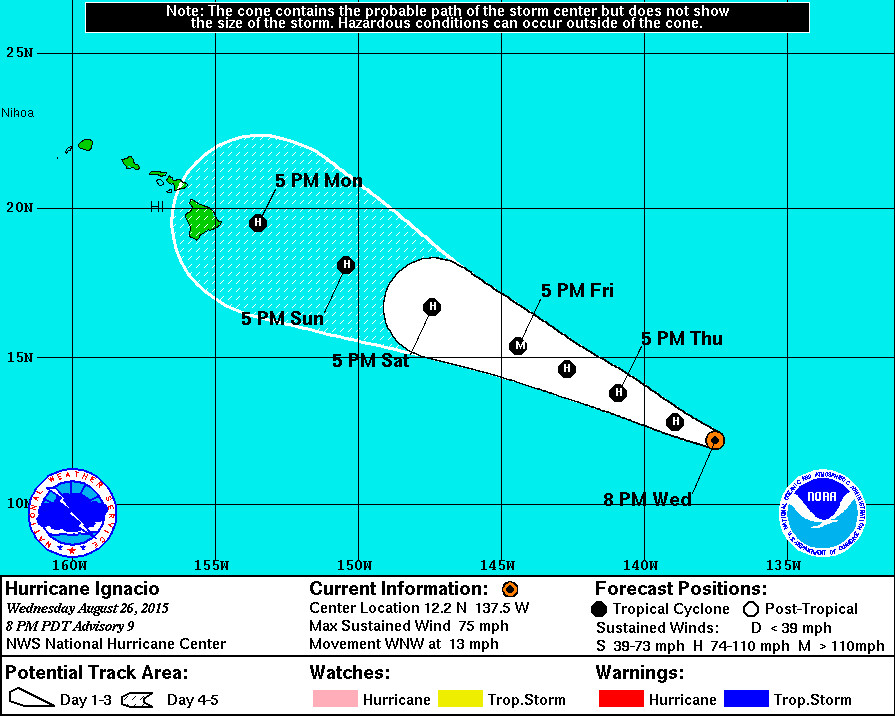 HAWAII ISLAND – Ignacio is now a hurricane and forecasters say it could become a major hurricane by the end of the week as it continues a track towards Hawaii.

“Ignacio’s convective cloud pattern has continued to improve and recent passive microwave satellite imagery indicates that the cyclone has developed a large but closed eye,” reports the National Weather Service, “which is embedded in the center of a smooth CDO feature. Upper-level outflow is well-defined in all quadrants and is expanding.”

Hurricane Ignacio is 1,275 miles east southeast of Hilo and toward the west-northwest near 13 mph. This general motion is expected to continue through Friday, at which time Ignacio might have gained enough strength to be categorized as a major hurricane with winds over 111 mph. “Environmental conditions are expected to generally be favorable for additional strengthening throughout the forecast period,” says the National Weather Service in a 5 p.m. discussion. “The main hindering factor will be modest vertical wind shear for the next 24-36 hours, after which the shear is expected to decrease to less than 10 kt. However, given the very impressive outflow pattern that has developed, along with the aforementioned eye feature, rapid intensification is a distinct possibility during the next 24 hours.”

As Ignacio draws closer to Hawaii, forecasters say it should start to weaken. “By days 4 and 5, thermodynamic and oceanic conditions are expected to become less favorable,” said NWS, “and gradual weakening is expected to occur during that time.”

Hurricane Igancio is still a distance away and the forecasted track is subject to change. “A west-northwestward motion is expected to continue throughout the forecast period,” NWS reports, “due to a strong subtropical ridge to the north of Ignacio producing a deep layer of east-southeasterly steering flow. Although the GFS and ECMWF models differ widely on the track of the hurricane after 72 hours, the other reliable guidance models lie between those two aforementioned extremes.” 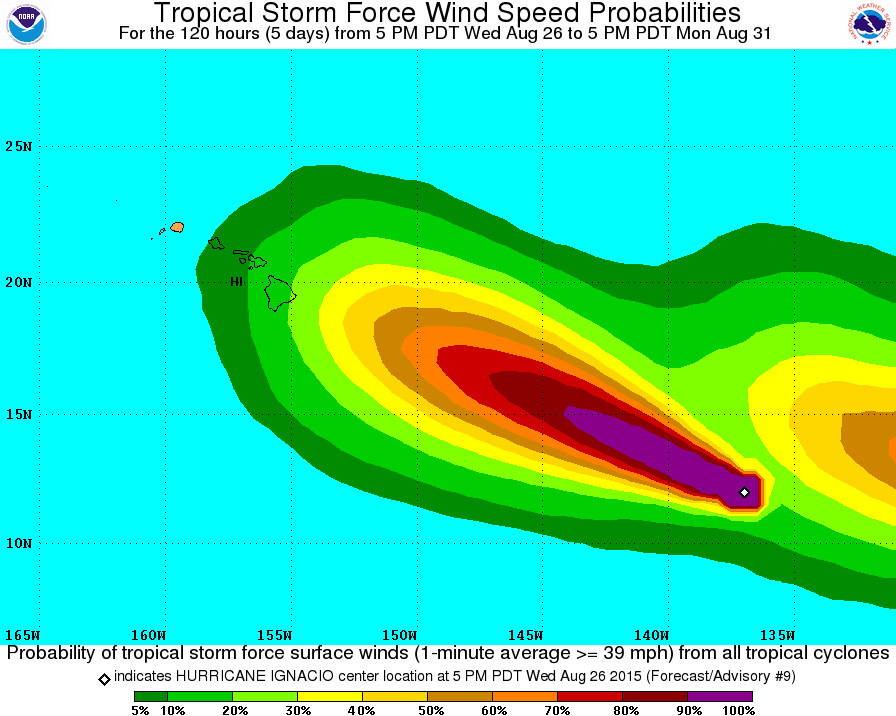 Tropical Storm Force Wind Speed Probabilities – 120 Hours by NWS at 5 p.m. HST. The storm following closely behind is Tropical Depression THIRTEEN-E, which is also forecast to become a major hurricane.