KONA: Parcel 26 at Kahalu‘u - A Residential Project for Towne Development of Hawai‘i, as the project is currently called, proposes to build 306 multifamily time share units on a 42-acre property mauka of Ali‘i Drive.

KAHALU‘U, Hawaii – The final environmental assessment (EA) for a proposed development mauka of Kahalu’u Beach Park has been published with a Finding of No Significant Impact.

“Parcel 26 at Kahalu‘u – A Residential Project for Towne Development of Hawai‘i”, as the project is currently called, proposes to build 306 multifamily time share units on a 42-acre property mauka of Ali‘i Drive. “The project will be developed as CPR units and sold as time share units,” the Final EA document states, “which depending on market conditions may be sold instead as whole units. The project includes internal utilities and driveways, swimming pools and recreational facilities, and landscaping. Connections to wastewater systems will occur on Ali‘i Drive.”

The project originally proposed 338 units, however that number has been reduced in order to accommodate a buffer area around the Kahulamu family cemetery lot. (More on the Kahulamu discussions below.)

The document says there are no threatened or endangered plant species in the project area, and that “implementation of already approved archaeological preservation preserve plans, data recovery, burial treatment and monitoring plans will mitigate impacts to historic sites.” The EA also says the project would not affect shoreline uses, and that the three-story multi-family structures will not interfere with views to or from the shoreline.

“Traffic on Ali‘i Drive will increase as a result of the project,” the EA admits, “but congestion will not significantly increase. The project also offers a potential emergency evacuation route to La‘aloa Avenue via the Kahului to Keauhou Parkway right-of-way.” 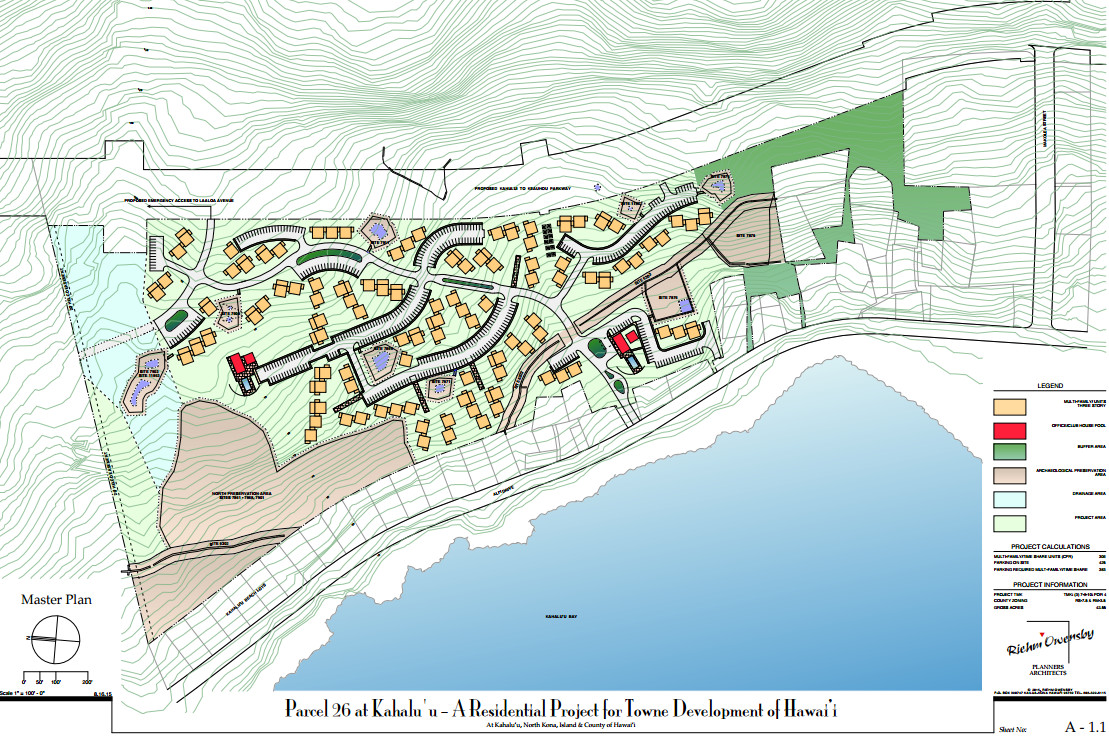 The bulk of the revisions in the final EA reflect discussion with the Kahulamu family, which informed developers that they are engaged in the traditional cultural practice of protecting and maintaining burials on their property and in the project area. The Cultural Impact Assessment published in the draft EA failed to identify the cultural resources and practices, and so a series of meetings were held with various members of the Kahulamu family and former councilman Curtis Tyler.

From the Final EA:

“The issues related to cultural resources centered on four main points. The first point is related to the Kahulamu family cemetery. The family is concerned that any development in close proximity to the cemetery will alter the character of the cemetery. The cemetery is now a secluded, peaceful place where family members spend private time with their deceased family members. They are concerned that nearby development will disrupt privacy and could promote an environment that is not respectful to the family members buried in the cemetery, including unauthorized visitation by the occupants of the residence or their visitors.

The second point is the family members’ concern that there are unmarked burials on the Towne property. Several family members recalled that a grandfather of Willy Kahulamu had blocked off and concealed the entrances to burial caves that he knew of. The lava tubes containing the burials were described as running mauka/makai under the Towne property and the Kahulamu property. The lava tubes were ran from the mountain to below the sea. The Kahulamu ‘Ohana consider the protection and preservation of Hawaiian burials to be a long-standing and ongoing cultural practice. As discussed in Section 3.2.3 below, archaeologists have not been able to verify the existence and location of these burials as being on the Towne property through surface surveys or through lava tube openings on or near the property into which they have been allowed to enter (the archaeologists have not been allowed access to certain areas). Towne has expressed its wishes to honor and respect the desire for privacy of these areas.

The third point is related to the broader Kahalu‘u area development, population increase, and their impacts on the traditional Hawaiian cultural perspective of the natural world. The Kahulamu family discussed the importance of resource zones and sustainability to Hawaiian cultural practices. Each region of the land, from the coast to the mountains, has unique resources that were cultivated and harvested by Hawaiians. Development has constricted the size, or restricted access to, many of these resource base areas. The overall process has prevented the continuation of many of the traditional cultural practices centered around gathering, fishing, and hunting. For example, the current generations of the Kahulamu family can remember that in their youth they were able to throw net at Kahalu‘u Bay and catch fish. With the onset of development, increased population, and increased shoreline traffic, the reef has been damaged and the numbers of fish have diminished. Development on the Towne property would not restrict or further affect these practices. Water quality studies discussed in Section 3.1.2 demonstrate that there will be no adverse effects to water quality. The proposed undertaking will not produce adverse effects to any other specific Native Hawaiian cultural practices in the area.

The fourth and final point discussed was the fact that the project site is within the Kahalu‘u Historic District. There is a feeling that the Historic District has certain values that are compromised whenever development occurs within it. 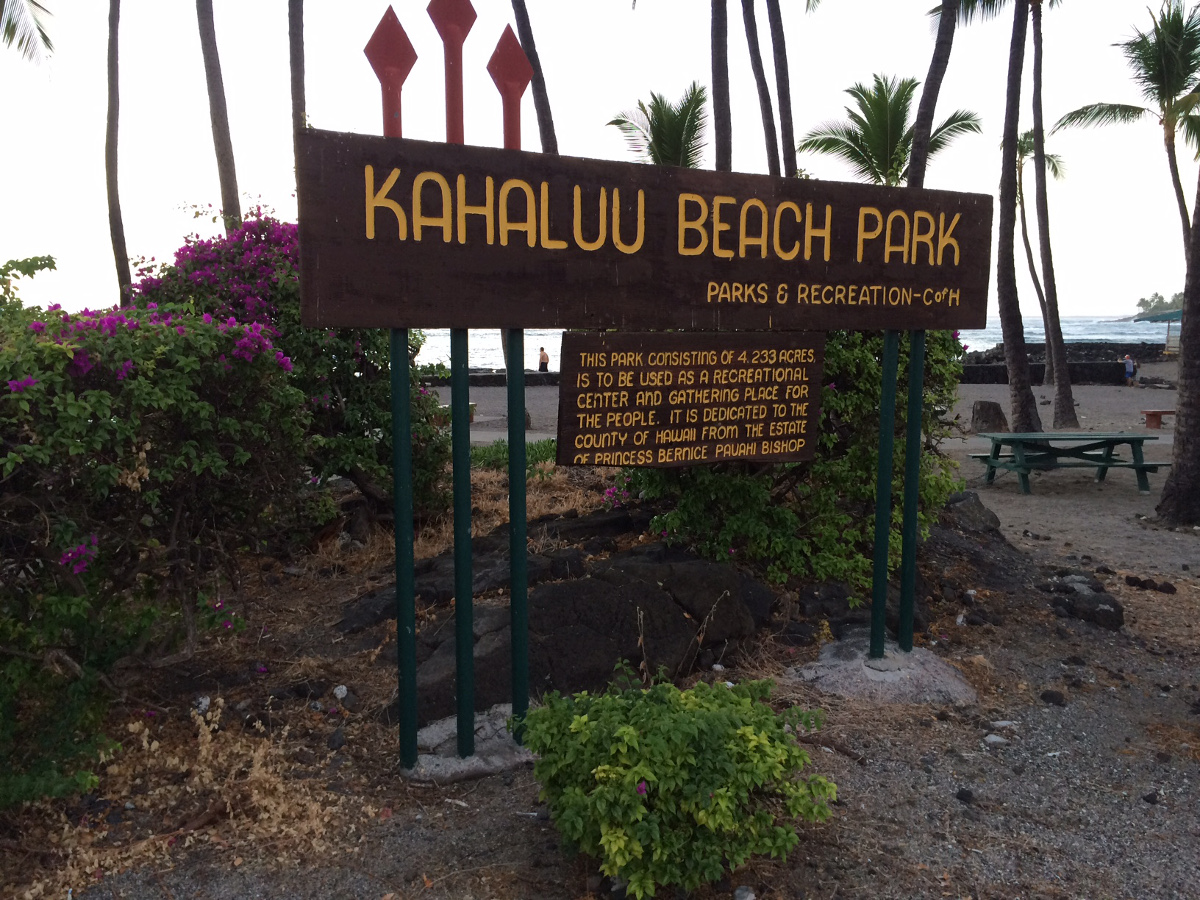 In a September 2013 letter to the Planning Department regarding Parcel 26 at Kahalu‘u, the Hawaii County Department of Parks and Recreation focused on Kahalu’u Beach Park, which is under their purview. “The impacts presented and corresponding mitigation measures proposed are unsatisfactory,” read the letter, signed by Director Clayton Honma.

The developer’s current position on Kahalu’u Beach Park, taken from the Final EA:

“It is likely that many of the occupants of the time share units will avail themselves of the amenities at Kahalu‘u Beach Park, and there will be an increase in use that may impact the resources and the enjoyment of the park by other visitors and residents. New property tax revenues will make it possible to improve the park to partially mitigate this impact.

The lengthy Final EA document can be found online on the oeqc.doh.hawaii.gov website.