Olaf Strengthens Into A Hurricane

Tropical Storm Olaf is now a hurricane, 1,700 miles southeast of Hilo. Maximum sustained winds have increased to near 75 mph with higher gusts. Some strengthening is forecast and Olaf could become a major hurricane on Monday. 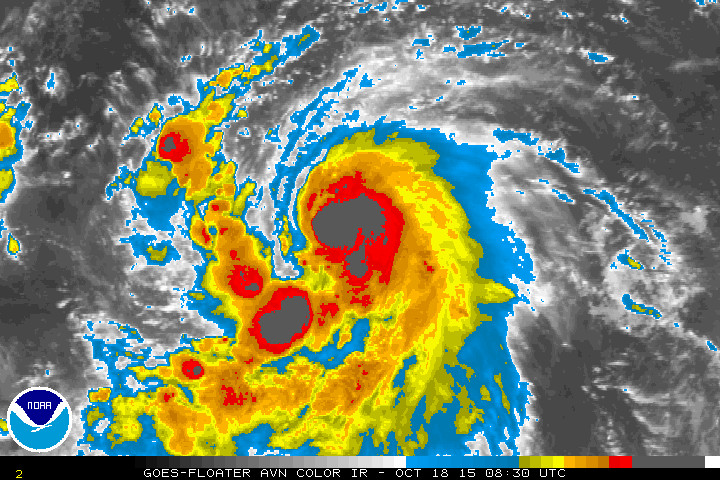 HAWAII ISLAND – Tropical Storm Olaf is now a hurricane, 1,700 miles southeast of Hilo. Maximum sustained winds have increased to near 75 mph with higher gusts. Some strengthening is forecast and Olaf could become a major hurricane on Monday, according to the National Weather Service.

“Olaf has intensified overnight. Satellite images show that convection has deepened with a sizable area of -90C cloud tops near the center, along with an eye occasionally appearing on the night-visible channel. Microwave data also show that the eye has become better defined, and the feature has even become more distinct in the lower resolution AMSU data. With the appearance of the eye in conventional satellite data and the increase in convection near the center, the initial wind speed is set to 65 kt, near the Dvorak estimate from SAB. It is also worth noting that ASCAT data show that Olaf has also grown in size significantly from yesterday, and this is reflected in the larger initial and forecast wind radii.

Olaf should continue to intensify during the next couple of days with favorable environmental conditions of low shear, warm water and high mid-level moisture in the forecast. Rapid intensification is a distinct possibility, with the SHIPS-RI index showing about a 40 percent chance of a 30-kt increase in the next 24 hours. The intensity forecast will bring Olaf up to major hurricane strength in 36 hours, in line with the highest guidance from the LGEM model and the Florida State Superensemble. In a few days, some southerly shear and dry air entrainment is possible, which could lead to Olaf beginning a weakening trend. Little change was made to the long range intensity forecast, close to a blend of the previous NHC prediction and the intensity consensus.”National Weather Service at 11 p.m. 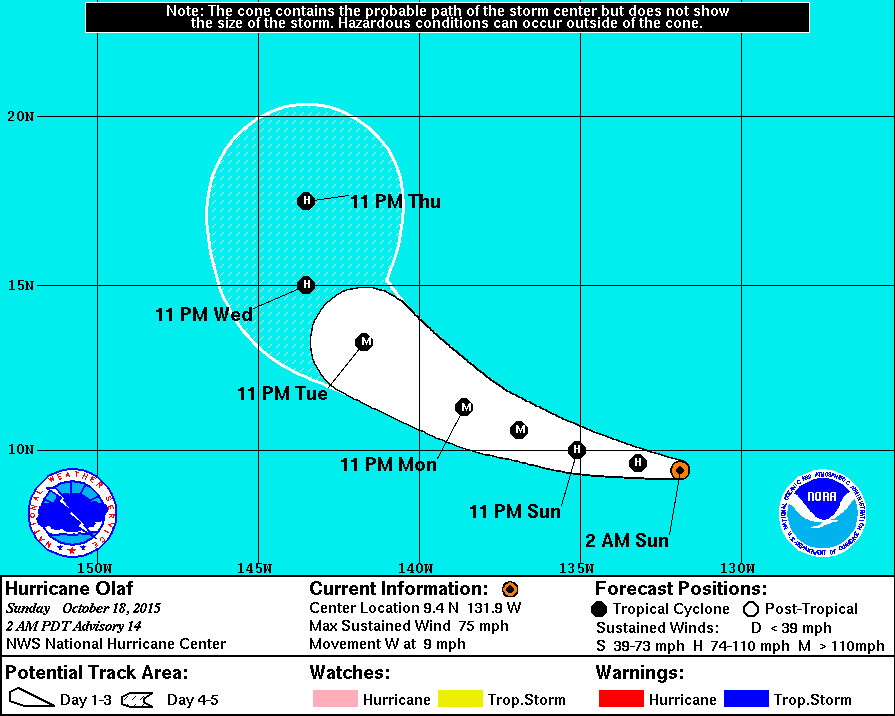 There are no coastal watches or warnings in effect. Right now, Hurricane Olaf is moving toward the west near 9 mph. This general motion is expected to continue today with a turn toward the west-northwest forecast on Monday.

“ASCAT and satellite data were very helpful in determining an initial motion of 275/8. A motion to the west and then west- northwest is expected for the next two days or so while the cyclone moves on the south side of the subtropical ridge. After that time, a mid- to upper-level trough passing north of the Hawaiian Islands is forecast to cause a break in the ridge, allowing Olaf to turn northwestward by 96 hours and northward by 120 hours. Although guidance is in general agreement on the large-scale pattern, the timing of the northward turn is in some question, especially since Olaf has been struggling to gain latitude. Overall, the guidance has generally been showing a later turn, with the ECMWF/UKMET models having a weaker trough and less of a ridge breakdown. The NHC track forecast is shifted west toward the latest consensus aids, although it still lies east of the model consensus.National Weather Service at 11 p.m.

Olaf is the eleventh hurricane of the Eastern Pacific season. It also holds another distinction, according to the NWS:

“At 9.4N, Olaf is the lowest-latitude hurricane formation in the eastern Pacific dataset. Reliable records in the basin go back to about 1971.”National Weather Service at 11 p.m.