Hurricane Olaf has been strengthening all day, churning out over the Pacific Ocean 1,235 miles east southeast of Hilo. The storm's maximum sustained winds have increased to near 140 mph with higher gusts, making Olaf a category 4 hurricane.

HAWAII ISLAND – Hurricane Olaf has been strengthening all day, churning over the Pacific Ocean 1,235 miles east southeast of Hilo. The storm’s maximum sustained winds have increased to near 140 mph with higher gusts, making Olaf a category 4 hurricane on the Saffir-Simpson Hurricane Wind Scale. Olaf the 6th major hurricane in the eastern North Pacific this year, and this is the farthest south that a major hurricane has formed in the basin “since reliable records began in 1971” forecasters say.

“Olaf has maintained a small pinhole eye with a diameter of no more than 10 n mi. Satellite intensity estimates were a consensus T6.0/115 kt from TAFB, UW-CIMSS ADT, and the NHC AODT algorithm at 20/0000Z. However, since that time the eye has warmed a little and a ring of cloud tops colder than -75C has developed around the eye, so the intensity has been nudged slightly higher to 120 kt.

There has been slight flattening of the CDO in the northwestern quadrant caused by some light to moderate northwesterly mid-level shear as noted in recent UW-CIMSS shear analyses, which could inhibit intensification some in the short term. However, some additional strengthening is still likely over the next day or so since Olaf will be affected by deep-layer shear of 5 kt or less and be over 29C SSTs. As mentioned in the previous advisory, there could be fluctuations in intensity due to eyewall replacement cycles that can not be forecast more than a few hours in advance. The NHC intensity forecast continues to indicate a peak of 125 kt at 12-36 hours, followed by a slow decay by 48-72 as Olaf begins to move slowly over slightly cooler SSTs and into a moderate southwesterly vertical wind shear regime. The official intensity forecast remains above the intensity consensus, but below the LGEM and SHIPS forecasts, which bring Olaf to just below category 5 strength in 36-48 hours.”National Weather Service at 5 p.m. HST 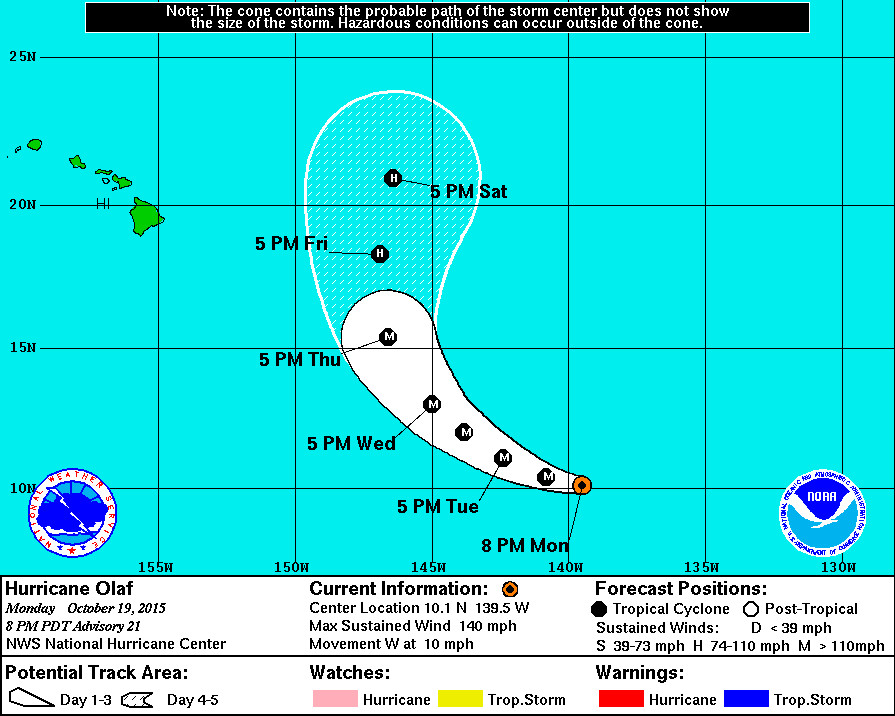 “The initial motion estimate is 275/09 kt. Olaf is expected to continue moving westward to west-northwestward along the southern periphery of a deep-layer ridge for the next 24 hours or so, and then turn northwestward toward a developing weakness in the ridge on days 2 and 3. By 96 and 120 hours, a series of fast-moving shortwave troughs embedded in the mid-latitude westerlies is expected to gradually create a break in the mid-level ridge between 145W-150W longitude, allowing Olaf to move northward and remain well east of the Hawaiian Islands. The latest NHC model guidance is in much better agreement on this developing scenario compared to 24 hours ago, and even the UKMET model has shifted eastward and is now on the east side of the guidance envelope at 96 and 120 hours. The official forecast track lies a little to the left of the previous advisory track, and follows the consensus models TVCE and GFEX.”National Weather Service at 5 p.m. HST

With Olaf moving into the central North Pacific basin this evening. That means the National Hurricane Center will hand off the monitoring duties to the Honolulu based-Central Pacific Hurricane Center beginning at 11:00 p.m. HST.