As many predicted after hearing the court's questions during the oral arguments presented on August 27, the court founds that the Board of Land and Natural Resources "acted improperly when it issued the permit prior to holding a contested case hearing." 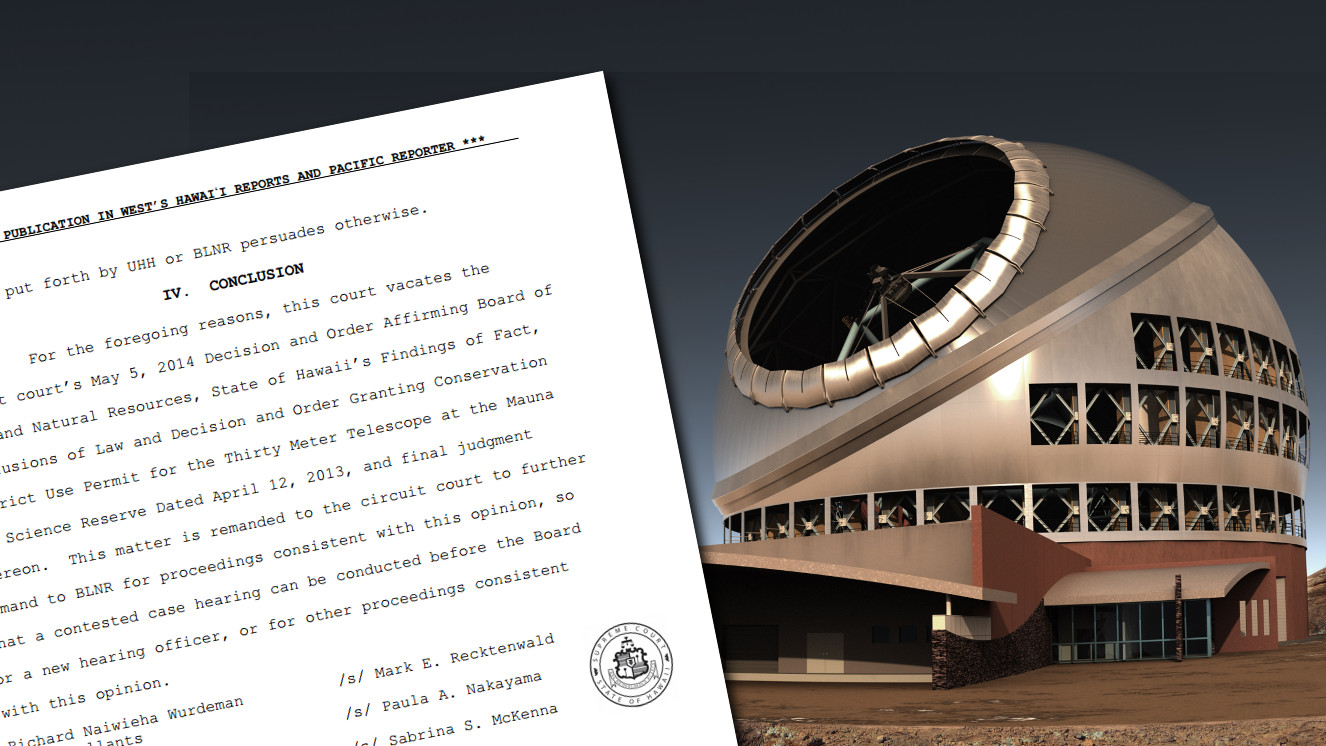 MAUNA KEA, Hawaii – The permit allowing the Thirty Meter Telescope to be built and operated on Mauna Kea has been thrown out by the Hawaii Supreme Court.

In the conclusion of a 58 page opinion written by Chief Justice Mark E. Recktenwald, the court vacated the lower circuit court’s “May 5, 2014 Decision and Order Affirming Board of Land and Natural Resources, State of Hawaii’s Findings of Fact, Conclusions of Law and Decision and Order Granting Conservation District Use Permit for the Thirty Meter Telescope at the Mauna Kea Science Reserve Dated April 12, 2013, and final judgment thereon.” The Supreme Court remanded the matter to the circuit court “to further remand to BLNR for proceedings consistent with this opinion, so that a contested case hearing can be conducted before the Board or a new hearing officer, or for other proceedings consistent with this opinion.”

As many predicted after hearing the court’s questions during the oral arguments presented on August 27 (video below), the court found that the Board of Land and Natural Resources “acted improperly when it issued the permit prior to holding a contested case hearing.” The court says BLNR’s February 25, 2011 approval violated Hawaii’s constitutional guarantee of due process.

On its Facebook page, the Thirty Meter Telescope wrote that “this is not a judgement against TMT, but rather against the State’s process in granting the permits. We’ll have an official statement for you shortly.”

This case illustrates the interweaving nature of the various provisions of our constitution. When rights as integral as the exercise of Native Hawaiian customs and traditions are implicated by a proposed action, our constitution provides several safeguards that combine to preserve those rights.

In this case, the Board was asked to grant a permit to UH for the construction of an astronomical observatory on the summit of Mauna Kea, an area sacred to Native Hawaiians. Because the project could infringe upon the constitutional right of Native Hawaiians to exercise their customs and traditions, the guarantees of Article XII, Section 7, the public trust obligations of the State under Article XI, Section 7, and the due process protections encompassed by Article I, Section 5 were all triggered to constitutionally safeguard the continued practice of Native Hawaiian customs and traditions.

Under the foregoing constitutional provisions and the precedents of this court, the Board’s obligations were to protect Native Hawaiian customs and traditions to the extent feasible, to effectuate the values of the public trust, and to provide a procedure befitting the compelling interests at stake. To perform these obligations, the Board was required to decide UH’s application pursuant to a decision-making process that incorporates the rights, values, and duties embodied by the constitutional provisions involved. Instead, the Board failed to conduct a contested case hearing before deciding the merits of UH’s application and summarily granted the requested permit without duly accounting for the constitutional rights and values implicated. The Board acted in contravention of the protections of Native Hawaiian customs and traditions provided by Article XII, Section 7; Article XI, Section 7; and Article I, Section 5. Accordingly, as a matter of constitutional law, the permit issued by the Board must be invalidated.