The Hawaii Department of Health reports 3 new confirmed cases of dengue fever on the Big Island since the last update on Monday, Dec. 21, bringing the total number to 170. A refined map depicting case locations since the outbreak began was also produced. 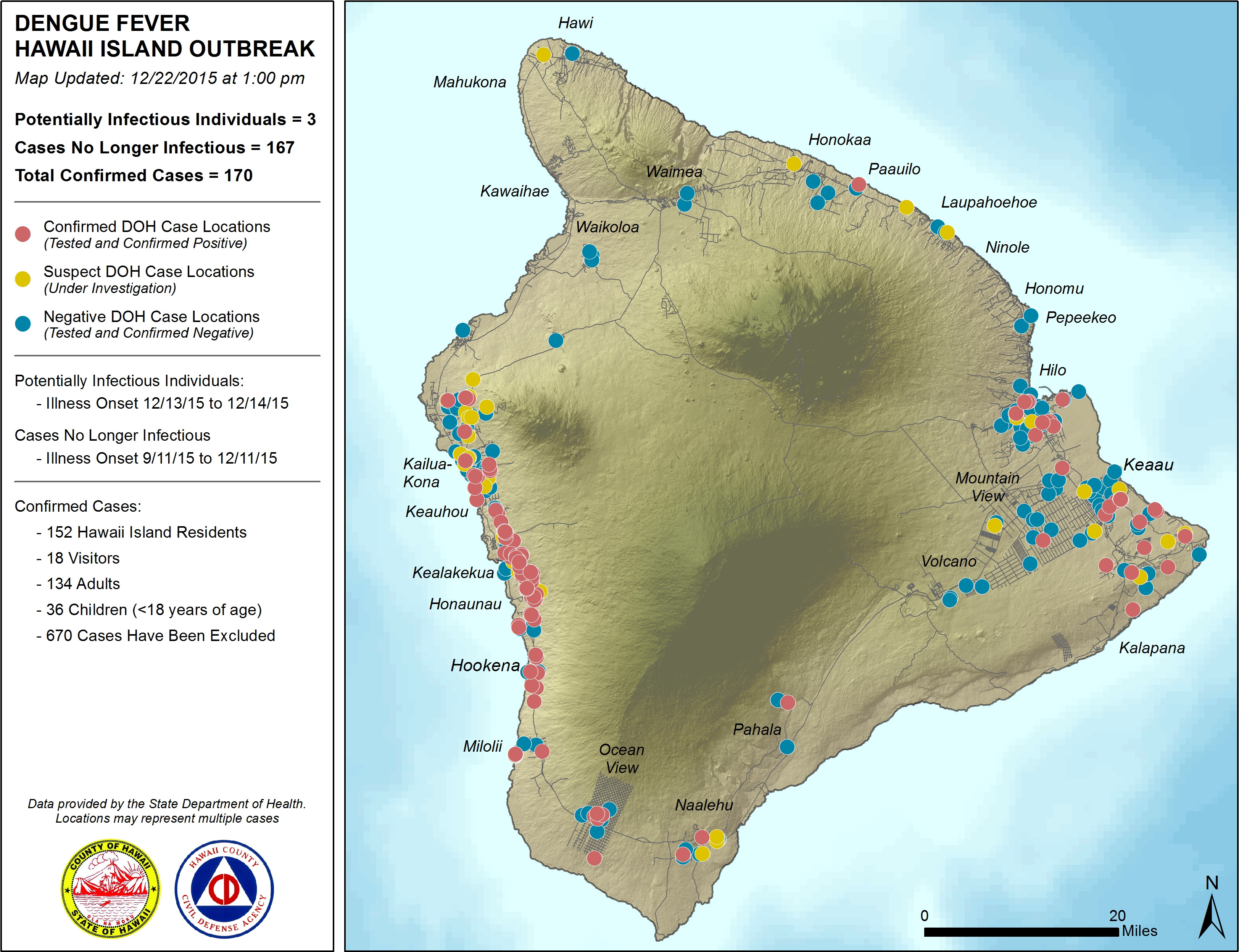 HAWAII ISLAND – The Hawaii Department of Health reports 3 new confirmed cases of dengue fever on the Big Island since the last update on Monday, Dec. 21, bringing the total number of cases to 170 since the outbreak began in September 2015. The state says only 3 cases are potentially infectious, while the remaining 167 are no longer infectious.

State officials say that of the confirmed cases, 152 have been Hawaii residents and 18 have been visitors. 134 cases have been adults; 36 have been children under 18 years of age. The number of reported potential cases that were *excluded* based on test results and/or not meeting case criteria rose from 659 to to 670.

The Hawaii County Civil Defense agency also issued an update today, adding that “updates to the dengue outbreak will be limited to three times a week on Mondays, Wednesdays, and Fridays.” A refined map depicting case locations since the outbreak began was also produced. The new map is essentially cosmetic makeover and incorporates the same approach to presenting the data as the previous map. However, the map now incorporates the number of potentially infectious cases (numbers, not locations) as reported by the state.

The State Department of Health continues to work with other state and county agencies to control the dengue outbreak. As of 1:00 today the Department of Health reported three additional confirmed cases since yesterday, bringing the total number of confirmed cases since the beginning of the outbreak to 170. These cases include 152 residents and 18 visitors.

Dengue is a virus that is transmitted from an infected person to a mosquito, which can then infect another person. Dengue fever cannot be spread directly from person to person. Of the 167 confirmed cases, 3 are currently in the stage of their illness in which they can infect mosquitoes.

Symptoms of dengue include a high fever, intense headache and joint pain, and rash on the arms. If you suspect you may have dengue, contact your health care provider and remain indoors to prevent the possibility of being bitten and infecting mosquitoes.

The Department of Health is spraying and treating areas connected to confirmed cases to reduce mosquito populations. In addition, Civil Defense teams are inspecting areas of high mosquito presence reported by the community. If teams visit your home while you are away, they will leave a note – please follow the instructions on the note to contact the appropriate agency.

While these efforts lower risk by reducing mosquito populations, the most effective method to reduce the spread of dengue is for everyone to avoid and prevent mosquito bites. Fight The Bite by wearing clothing that minimizes exposed skin, using mosquito repellant, and avoiding activities in areas of high mosquito concentration during the early morning and late afternoon periods when mosquito activity is greatest.

For additional information on dengue and preventing the spread, go to health.hawaii.gov or call the Department of Health at 974-6001. Everyone’s help and assistance with this outbreak is much needed and appreciated.

Effective this week, updates to the dengue outbreak will be limited to three times a week on Mondays, Wednesdays, and Fridays.