HILO: As Oahu-based state administrators are stepping up the awarenss campaign concering Hawaii Island's growing Rapid ‘Ōhi‘a Death (ROD) problem, Hilo-based scientists are continuing their work to learn about and stop the native tree-killing fungus before its too late.

HILO, Hawaii – As Oahu-based state administrators are stepping up the awareness campaign concerning Hawaii Island’s growing Rapid ‘Ōhi‘a Death (ROD) problem, Hilo-based scientists are continuing their work to learn about and stop the tree-killing fungus before its too late.

On Wednesday, simultaneous news conferences were held on Oahu and Hawaii Island, as managers and researchers provided updates on the disease that has already killed hundreds of thousands of ‘ohi‘a on the Big Island. They also talked about the kick-off to a new ROD awareness campaign.

The full video of that discussion is presented above, and is mixed with footage of dying ‘ohi‘a taken by the Department of Land and Natural Resources from the ground and from a helicopter overflight. 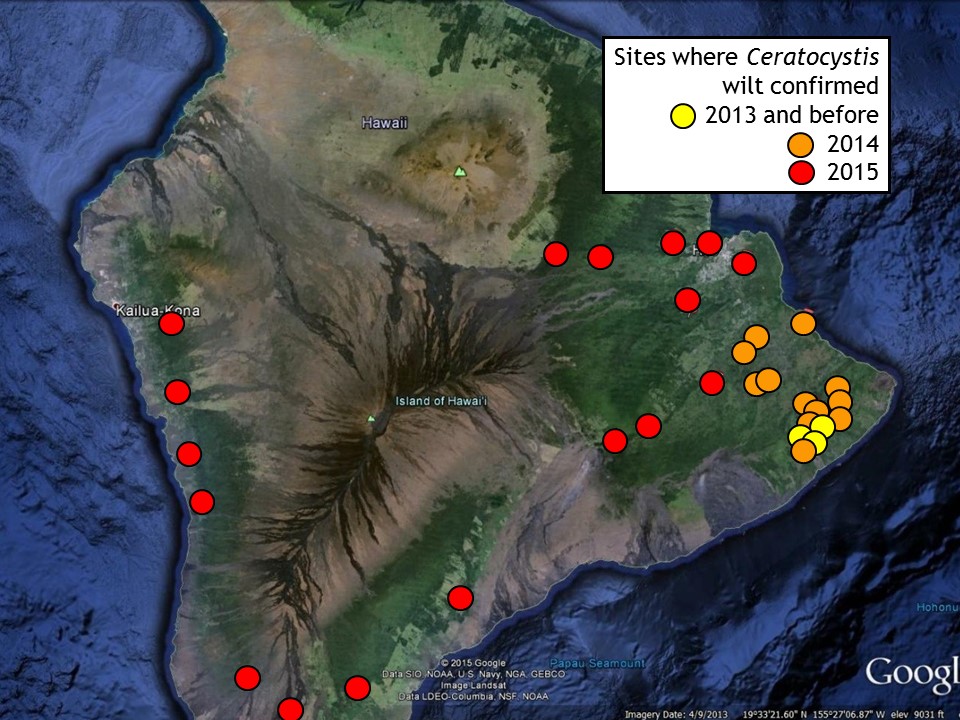 Sites where Ceratocystis wilt (Rapid Ohia Death) has been confirmed as of Dece,ber 23, 2015. Map produced by University of Hawaiʻi College of Tropical Agriculture and Human Resources.

HUNDREDS OF THOUSANDS OF ‘ŌHI‘A TREES KILLED BY MYSTERIOUS DISEASE
State, Federal & Partners Step Up the Fight and Raise Awareness

(HONOLULU) – Rapid ‘Ōhi‘a Death, is a mysterious disease that has already killed hundreds of thousands of Hawaii’s iconic and native ‘Ōhi‘a, the backbone of Hawaii’s native forests and watersheds.

Dr. J.B. Friday of the University of Hawaii Cooperative Extension Service explains, “ROD is caused by a fungus called Ceratocystis fimbriata. This disease is new to Hawai‘i and the strain of fungus infecting ‘ōhi‘a, has never been described before. While apparently only impacting Big Island forests currently, this has the potential of spreading statewide, so it’s critically important we do everything to stop it.”

Numerous state and federal agencies have partnered to develop up-to-date information about , Rapid ‘Ōhi‘a Death that will help minimize further spread and give researchers time to find answers and develop potential treatments. Scientists say new information is being uncovered nearly on a weekly basis.

DLNR Chair Suzanne Case, along with Dept. of Agriculture (HDOA) Chair Scott Enright are two of the top state officials engaged in the battle against Rapid ‘Ōhi‘a Death. Case said, “‘Ōhi‘a trees cover more than one million acres statewide and ‘ōhi‘a is widely considered the most important forest tree in Hawai‘i. They are so important for protecting our forest watersheds that it’s necessary our approach to combating this disease involves the highest levels of government and includes non-government agencies and private partners that can provide additional resources and expertise.”

The DLNR Division of Forestry and Wildlife, in cooperation with the UH Cooperative Extension Service of the College of Tropical Agriculture & Human Resources, and the US Department of Agriculture (USDA) Agriculture Research Service & USDA Forest Service Institute of Pacific Islands Forestry have produced a brochure and rack card on Rapid ‘Ōhi‘a Death. In addition DLNR has produced a video version of the brochure now available on state, federal and social media websites https://vimeo.com/149782586

HDOA Chair Scott Enright said, “Many think this is only an issue on Hawai‘i Island. However, this disease is a threat to all ‘ōhi‘a trees across the state. The Department of Agriculture has already instituted a quarantine rule which prohibits interisland movement of ‘ōhi‘a plant and plant parts without inspection and a permit. Everyone must be vigilant, especially those who transport ‘ōhi‘a trees inter-island and on Hawai‘i Island.”

The quarantine rules, along with symptoms of the disease and five things everyone can do to prevent Rapid‘Ōhi‘a Death spread are outlined in the brochure, in the video, and on a website and Facebook page established to raise awareness and provide the latest information. ‘Ōhi‘a is widely used in lei for events like the Merry Monarch Festival. In 2016 the agencies and its partners expect to release follow-up information on traditional and cultural uses of ‘ōhi‘a, and how people can use lehua without spreading Rapid ‘Ōhi‘a Death.

Dr. Flint Hughes of the USDA Forest Service concluded, “With the help from nurseries, anyone traveling in, working in, or harvesting in the forest and people who transport ‘ōhi‘a, we stand a chance of stopping Rapid‘Ōhi‘a Death in its tracks. Without this concerted, interagency effort, the impacts could be devastating.”