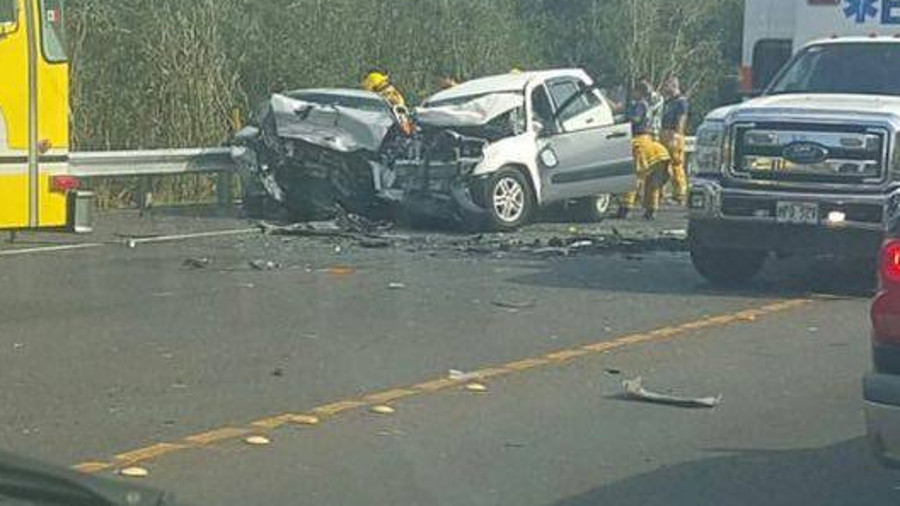 A 26-year-old man and an 86-year-old woman, both from Keaʻau, were killed Tuesday (December 29) in a three-vehicle traffic collision on the Keaʻau-Pāhoa Road (Route 130) in the area of the 2-mile marker in Keaʻau.

Responding to a 1:46 p.m. call, Puna patrol officers determined that Magee was operating a 2012 Nissan four-door sedan and was traveling east on the Keaʻau-Pāhoa Road when he crossed the centerline and collided with a 2002 Toyota RAV 4 multi-purpose vehicle being operated by a 54-year-old Keaʻau woman and traveling in a westerly direction. After that initial collision, the Toyota collided with a 2005 Ford pick-up truck that was also traveling west and being operated by a 24-year-old Hilo man.

Benedict was a passenger in the Toyota RAV 4.

Fire/rescue personnel took the driver of the Toyota to Hilo Medical Center, where she was being treated for a leg injury.

The driver of the Ford pick-up truck was not injured.

The deceased were taken to Hilo Medical Center, where they were officially pronounced dead at 6:30 p.m.

It is unknown if speed, alcohol or drugs were involved.

Traffic Enforcement Unit officers have initiated negligent homicide and coroner’s inquest cases and have ordered autopsies to determine the exact cause of death.

Anyone with information is asked to call Officer Keith Nacis at 961-8119.

This is the 18th and 19th traffic fatality this year compared with 11 at this time last year.

In a 2:11 p.m. alert, Hawaii County Police reported Highway 130 – also known as the Keaau-Pahoa Highway – would be closed in both directions for an unknown amount time. Motorists were advised by police to use the Road 8 / Ainaloa Boulevard emergency access route until further notice. A Civil Defense message was issued at 2:45 p.m. (above).

Photos on social media showed the wreckage from the highway (Instagram photo above). There are unconfirmed reports of fatalities.