Film To Bring Legacy Of Katsu Goto To Life

An effort is underway to document the story of Katsu Goto, the Japanese labor leader who was lynched to death in Honoka‘a in 1889. To help raise funding for the project, the Katsu Goto Memorial Committee is presenting a preview of its planned film on Nippon Golden Network (NGN Channel 677) via Oceanic Time Warner Cable in Hawai‘i in early January.

HAWAII – An effort is underway to document the story of Katsu Goto, the Japanese labor leader who was lynched to death in Honoka‘a in 1889. To help raise funding for the project, the Katsu Goto Memorial Committee is presenting a preview of its planned film on Nippon Golden Network (NGN Channel 677) via Oceanic Time Warner Cable in Hawai‘i in early January.

Hilo, HI – (Tuesday, Dec. 22, 2015) – Discover the story about Katsu Goto, an early Japanese immigrant who came to Hawai‘i in 1885 aboard the City of Tokio, the first ship of the Kanyaku Imin (contract laborers) to work on the sugar plantations in Hawai‘i. After enduring a three-year labor contract at Soper, Wright & Co. along the Hamakua coast of Hawai‘i Island, Goto became a successful businessman and labor leader. He was killed via a lynching in Honoka‘a, Hawai‘i in 1889 while helping Japanese sugar plantation workers.

“Bringing the Legacy of Katsu Goto to Life” is the first documentary of his story presented by the Katsu Goto Memorial Committee (KGMC) of the Honokaa Hongwanji Mission. This special is a 25-minute preview as well as a behind the scenes look at the “making of” the documentary on Katsu Goto featuring a fundraising campaign to document his story on film. The preview will run four times on Nippon Golden Network (NGN Channel 677):

The previews are airing during the Nippon Golden Network “Freeview” period (Dec. 30 – Jan. 3) when NGN will be available for free to all Oceanic Time Warner subscribers in the state of Hawai‘i. Interviews will be captioned for Japanese and English speakers.

In the preview, experience interviews with his descendants, academic and historical scholars, community members and the film’s production team. Cane fire: Filmmaker Danny Miller and Executive Producer Patsy Y. Iwasaki received permission from Hawaiian Commercial & Sugar Company on Maui to film a sugar cane burning before harvesting. Maui is the only location in Hawaii where sugar cane is grown for processing.

“As a film director, you look for those really beautiful stories that come together to make a movie and I think we really have those powerful stories in this film,” says Director and Editor Danny Miller.

“We still have new immigrants coming to Hawai‘i all the time so it is important for us to remember our history so we do not repeat some of the mistakes we have made in the past,” said Baron Sekiya, producer and writer.

It was Goto’s knowledge of the English language and Western laws that thrust him into his role as a bridge between Japanese contract laborers and plantation management as he fought for workers’ rights. “I feel that my life is in danger by being here . . . but I am not afraid,” said Goto while meeting Japanese laborers accused by plantation management of arson of a canefield, according to court documents. Goto was ambushed then lynched from a telephone pole in the town of Honoka‘a after this late night meeting.

Goto’s death in 1889 at 27 was tragic, but his legacy didn’t end there. Dr. Fumiko Kaya, Goto’s niece and a survivor of the bombing of Hiroshima, learned about the lynching of her uncle in 1985. Kaya admirably turned the tragedy into the Goto of Hiroshima Foundation in 1993 to benefit Hawai‘i scholars and improve cross cultural communication. The foundation continues today through the University of Hawai‘i at Manoa’s American Studies Department.

The KGMC is now seeking individual, foundation, corporate or organizational sponsors to provide production and completion funds and welcomes your participation to bring this important story to film. Executive Producer and Writer Patsy Iwasaki strongly believes “His story has become a legacy. It’s a Hawai‘i story, it’s an immigrant story, it’s a national story, it’s a story that needs to be told.”

If you have any questions or for more information, please contact Patsy Iwasaki at patsy@KatsuGotoMovie.org. The KGMC was created under the fiscal sponsorship of the Honokaa Hongwanji Mission, an affiliate of the Honpa Hongwanji Mission of Hawai‘i, a non-profit 501(c)(3) organization. To make a tax deductible contribution to the Katsu Goto film project, please make checks payable to: Katsu Goto Memorial Committee, ℅ Honoka‘a Hongwanji Mission, P.O. Box 1667, Honoka‘a, HI 96727 or you can make a contribution via Paypal on the website: KatsuGotoMovie.org 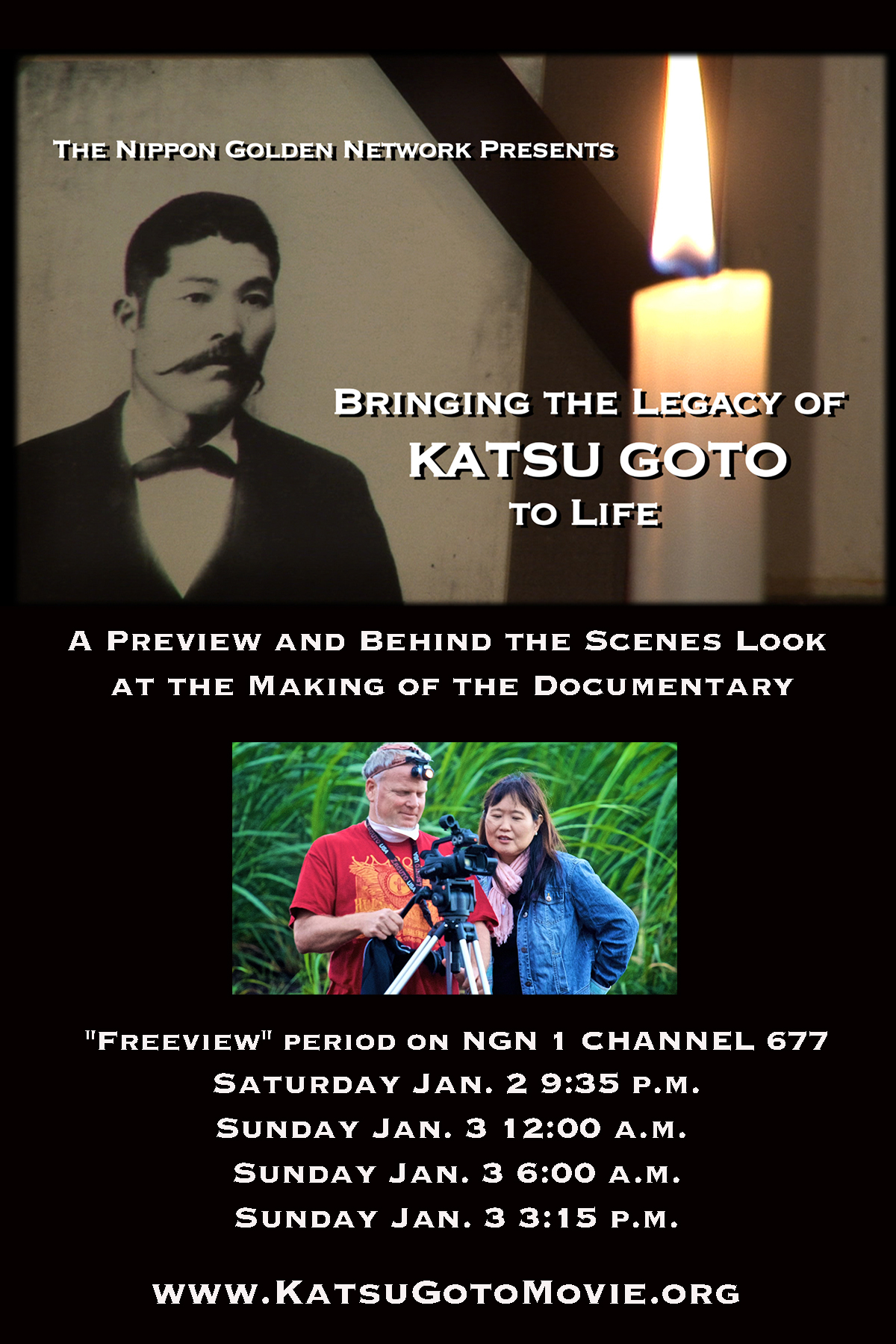