On Thursday, a helicopter crew captured some dramatic video while making their weekly trip over the lava flow. Mick Kalber filmed a huge breakout in the middle of the flow field on Thursday, some three miles northeast of the vent.

PUNA, Hawaii – Not much has changed over the Kilauea East Rift eruption lately, but the images of the volcanic activity are no less stunning.

The USGS Hawaiian Volcano Observatory reported on Friday that “webcam images show continued surface flow activity on the June 27th flow field, with smoke plumes where lava is igniting forest.” The most distal active lava is within 4 miles northeast of Puʻu ʻŌʻō, scientists say, and is not currently threatening any nearby communities. 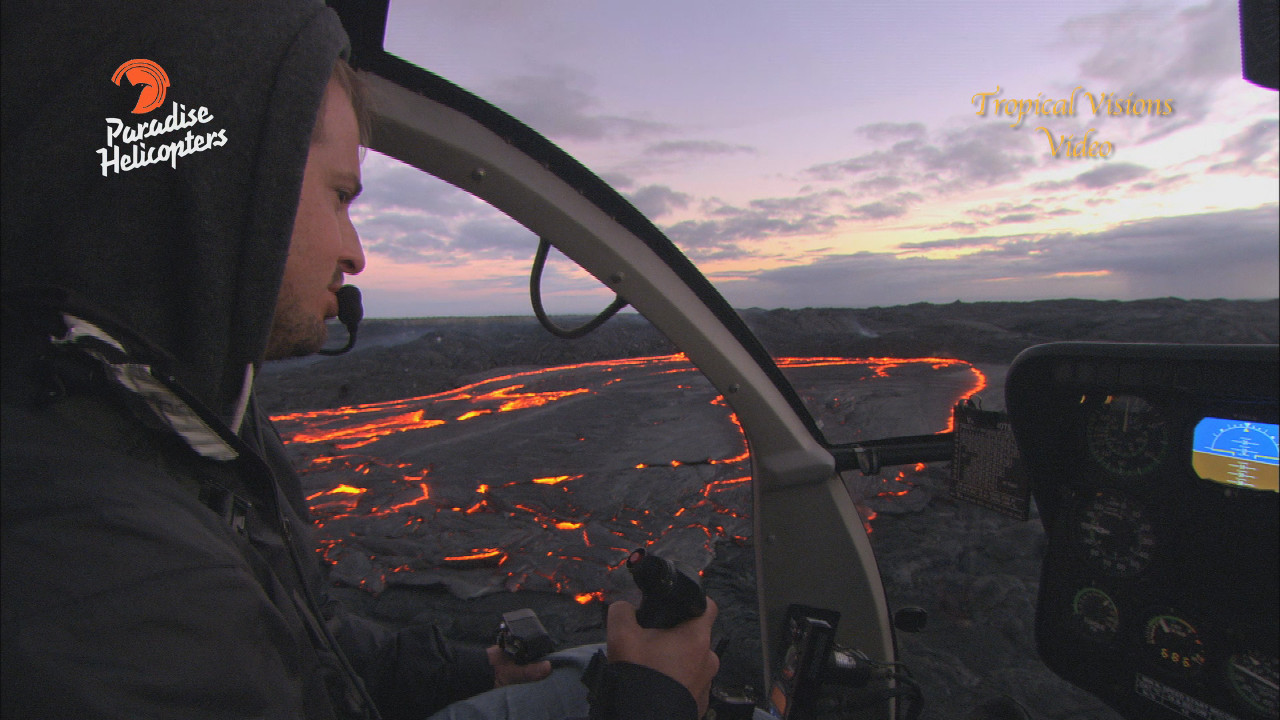 On Thursday, a helicopter crew captured some dramatic video while making their weekly trip over the lava flow. Mick Kalber filmed a huge breakout in the middle of the flow field on Thursday, some three miles northeast of the vent. “An area where we have not seen much activity as of late,” Kalber wrote. 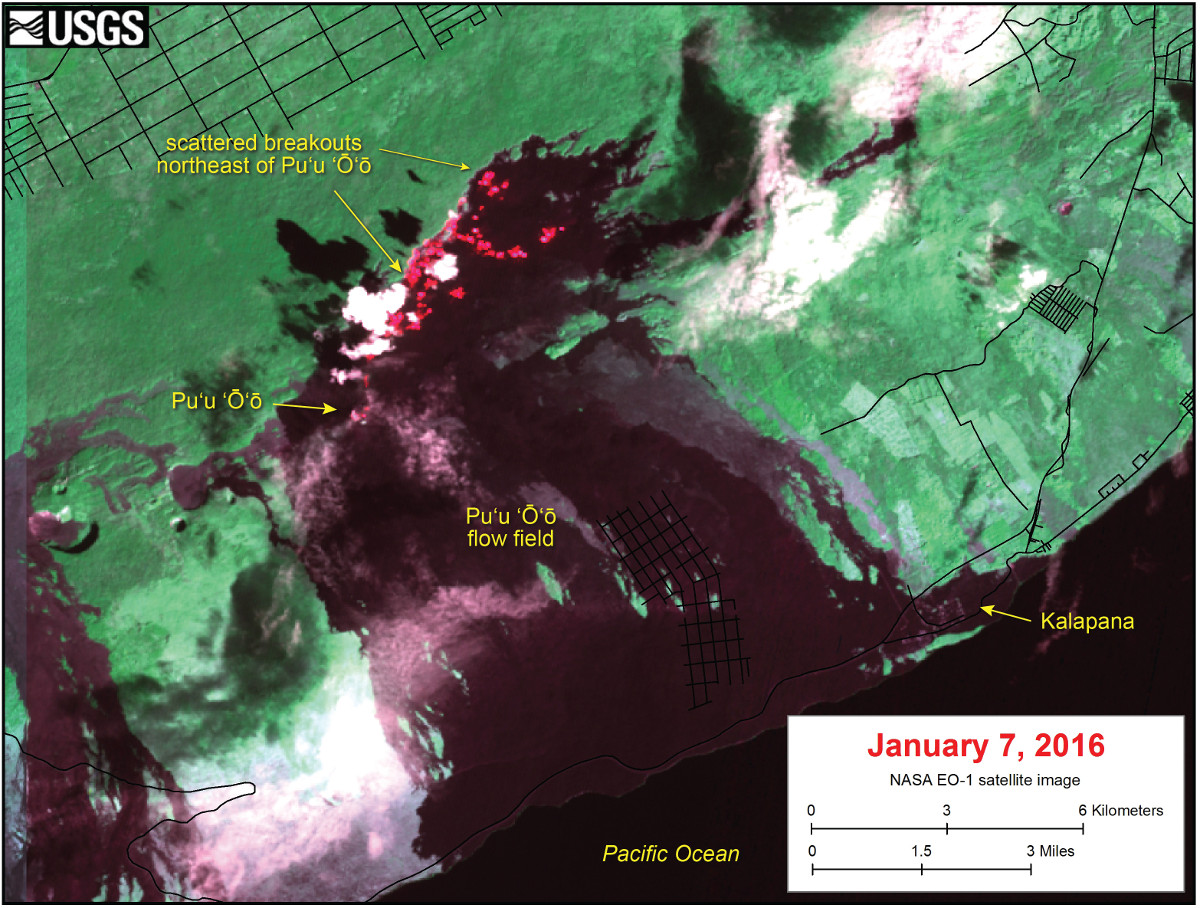 This satellite image was captured on Thursday, January 7, by the Advanced Land Imager instrument onboard NASA’s Earth Observing 1 satellite. The image is provided courtesy of NASA’s Jet Propulsion Laboratory. Although this is a false-color image, the color map has been chosen to mimic what the human eye would expect to see. Bright red pixels depict areas of very high temperatures and show active lava. White areas are clouds. (USGS HVO)

The video above combines video from Kalber’s flight aboard Paradise Helicopters and the vpice of USGS scientist Matt Patrick who was giving a talk that same day on the history and current status of Kilauea’s East Rift Zone eruption. It is important to note that Patrick was not making specific reference to Kalber’s video, which was released one day later. However, the new lava footage is indicative of the type of behavior that is described by Patrick during the talk. Patrick’s entire volcano talk will be published on Big Island Video News over the weekend. 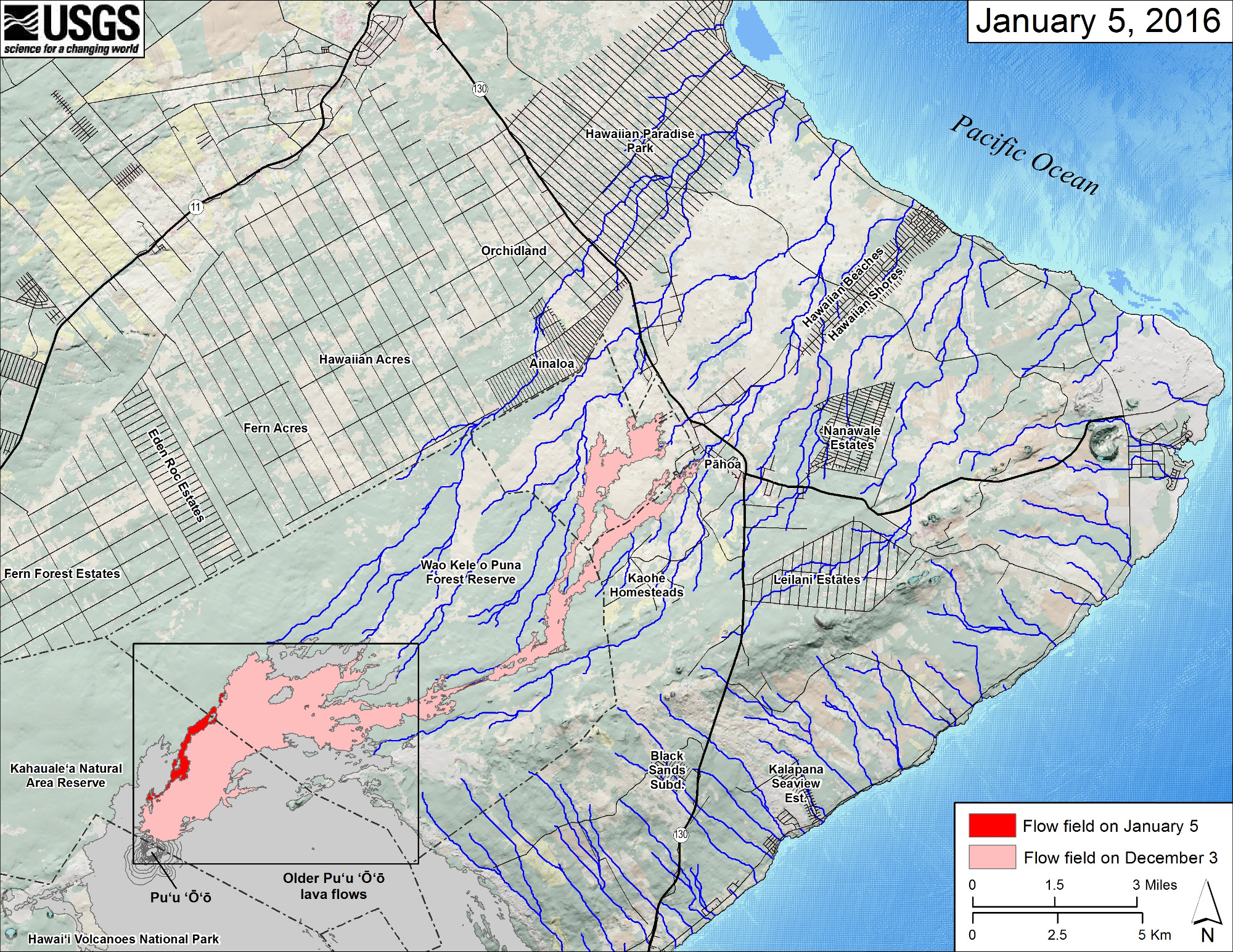 This small-scale map shows Kīlauea’s active East Rift Zone lava flow in relation to the eastern part of the Island of Hawaiʻi. The area of the flow field on December 3 is shown in pink, while widening and advancement of the flow field as mapped on January 5 is shown in red. The yellow lines show the active lava tube system. Puʻu ʻŌʻō lava flows erupted prior to June 27, 2014, are shown in gray. The black box shows the extent of the accompanying large scale map.
The blue lines show steepest-descent paths calculated from a 1983 digital elevation model.