Six new confirmed case of dengue fever were reported by health officials on Thursday, bringing the total number of recorded infections on Hawaii Island to 230 since the outbreak was identified in September. 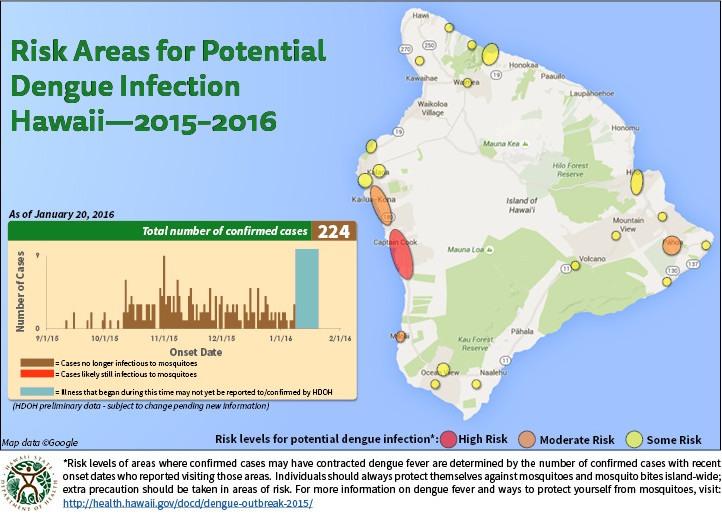 HAWAII ISLAND – Six new confirmed case of dengue fever were reported by health officials on Thursday, bringing the total number of recorded infections on Hawaii Island to 230 since the outbreak was identified in September. Only three of those confirmed cases are potentially infectious to mosquitoes.

Here is the latest:

To be successful in controlling and ending this outbreak, everyone’s help is needed to Fight The Bite. Preventing mosquito bites by wearing light colored clothing that minimizes exposed skin, using mosquito repellent, and avoiding activities in areas of high mosquito concentration during the early morning and late afternoon periods when mosquito activity is greatest. If you suspect you may have dengue, contact your health care provider and remain indoors to prevent the possibility of being bitten and infecting mosquitoes.

Help to reduce potential mosquito breeding areas around homes and businesses by:

– Removing or eliminating standing water that provides sources for mosquito breeding such as buckets or puddles.
– Fix leaky faucets and outdoor hoses that are dripping water.
– Treat bromeliads and other plants that hold water with a larvacide or chlorine bleach solution.
– Clean gutters to allow water to drain freely.
– Repair screens and windows to help keep mosquitoes out.
– Dispose of old tires at no charge at county transfer stations islandwide.

The Hamakua-Kohala Health Center will be hosting a meeting with the Department of Health and Civil Defense for the Honokaa community on Friday, January 22 at 6 p.m. at the North Hawaii Education and Research Center.

For additional information on dengue and preventing the spread, go to health.hawaii.gov or call the Department of Health at 974-6001. Everyone’s help and assistance with this outbreak is much needed and appreciated.