It was a great day for hanami as blooming cherry trees surrounded Church Row Park with pink during the 23rd annual Waimea Cherry Blossom Heritage Festival.

Hanami is the Japanese tradition of viewing the season’s first blooms, and festival organizers say the word literally translates to hana, “flower” and mi, “look.” But the cherry blossoms are just a part of the day long event featuring multi-cultural performing arts and hands-on demonstrations, plus nearly 150 crafters and food booths spread out across numerous locations – marked with pink banners – across Waimea. The event draws thousands to town every year.

As per tradition, this year’s event began with an opening ceremony behind Parker Ranch Center. Dignitaries in attendance included Hawaii Governor David Ige and Hawaii County mayor Billy Kenoi, Consul General of Japan in Honolulu Yasushi Misawa, as well as other state and local lawmakers. Penny Kelii-Vredenburg served as MC, and Roxcie Waltjen, the cultural education administrator for the county Parks and Recreation Department, gave a short history of the festival.

This media release is courtesy Fern Gavelek on behalf of the festival:

The Waimea Bonyu Kai Bonsai Club celebrates its 60th year in 2016. The club has a long and somewhat special relationship with the Cherry Blossom Festival as the club’s longtime sensei (teacher), the late Isami Ishihara, propagated the cherry trees planted in Church Row Park that eventually became the signature element for the annual festival. The club has participated in all festivals.

Bonyu Kai means “friendship club” and some of the club’s current members have been active members for over two decades and pass along what they learned from Mr. Ishihara throughout the years to newer members at meetings and events.

The practice of bonsai has a long tradition grounded both in artistic form and science. Club President Bob Male explains, “It is a continuous sharing and learning experience about the relationship and interaction we humans have with not only the plant kingdom, but all other elements of our environment (including other people).”

Club members have bonsai plants that range in age from a few years to more than 50. Many of the plants can be traced back to other bonsai masters, while the plants change every year due to their ongoing relationship with the environment and the perspective and care of their current trainer.

The Waimea Bonyu Kai Bonsai Club functions as a dynamic artistic, scientific, social experience that club members continue to embrace and practice. Club membership is open to all; for info email WaimeaBonsai@gmail.com.

Marking its 40th year, the Waimea Arts Council (WAC) is one of the state’s oldest arts organizations and made up of North Hawai‘i residents from all walks of life who are supportive of the arts: educators, business owners and artists. The all-volunteer council was founded in 1974 and designated a non-profit organization in 1978. WAC sponsors a variety of programs, exhibits and visual arts education, plus supports local artists with services.

The Firehouse Gallery is the most visual project of the Waimea Arts Council. Housed in South Kohala’s former fire engine garage and bunkhouse, the gallery is strategically located in the heart of Waimea at the Historic Corner where Mamalahoa Highway 19 becomes Highway 190 at Lindsey Road.

With exhibits changing monthly, The Firehouse Gallery serves as a venue for Big Island artists by providing educational and creative opportunities for sharing work. Artists donate a percentage of any sales to the organization. Staffed by artists and local volunteers, the gallery offers a variety of mixed media from watercolor, acrylic and oil paintings to glass, woodwork, photography and jewelry.

On of the original participants of the Waimea Cherry Blossom Heritage Festival, the gallery annually presents a cherry blossom-themed art display and invites attendees of all ages to get creative with chalk on the sidewalks winding through Waimea’s Historic Corner. 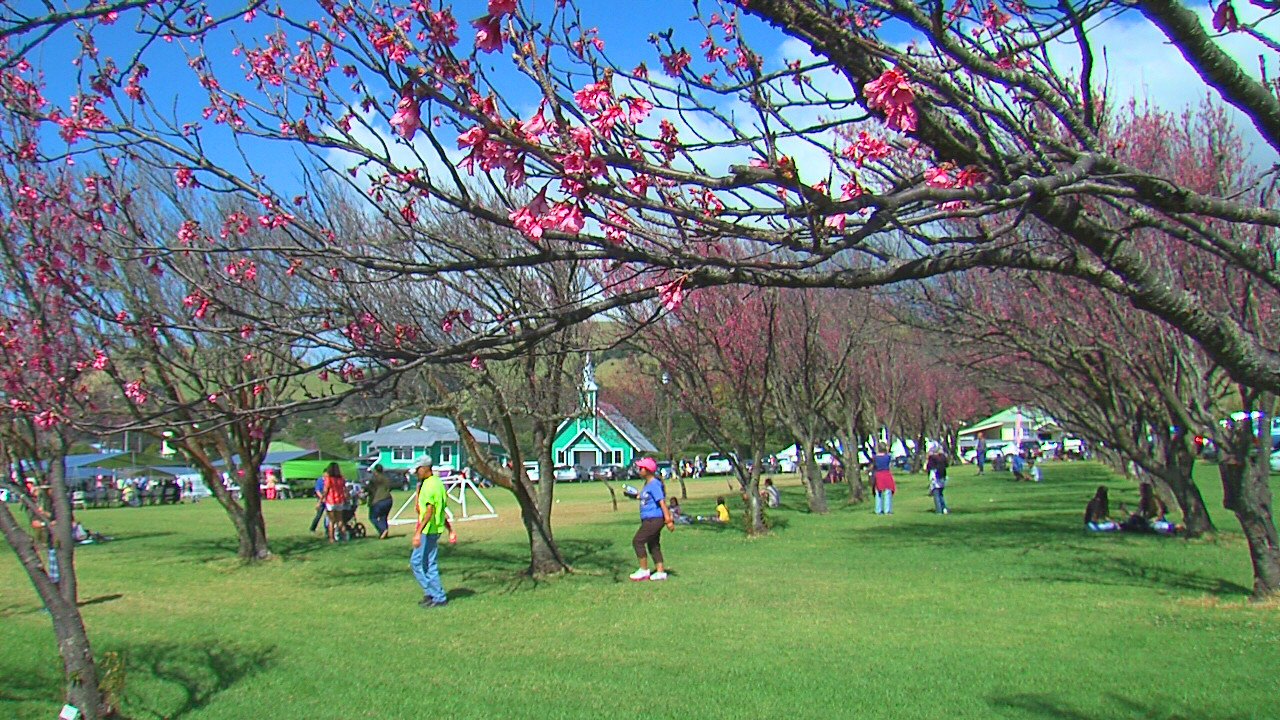