One of the dying wishes of late senator Gil Kahele was to sign a bill to preserve the South Kona makai lands of Kapua. The bill has already moved through the state senate.

SOUTH KONA – During the Feb. 8 “Evening of Aloha” celebrating the life of the late Senator Gil Kahele, the Song of South Kona was remembered fondly. There was a special showing of the documentary short, co-produced by Kahele, during the event at the Hilo civic auditorium. The film was followed by music honoring Milolii. One of the artists featured in the movie, Aunty Diana Aki, was on stage to perform at the Kahele memorial.

During the event, former Hawaii County Mayor Dante Carpenter recalled how hard Senator Kahele worked to improve life for the villagers of Miloli’i, saying Gil”was the leading advocate for correcting a long unresolved problem: how to help families displaced by the 1926 Mauna Loa lava flow that destroyed Ho’opuloa remain – legally – in their village. Carpenter specifically mentioned Act 62 of 1982 and amended Act 83 of 1984 which helped the families find homes in a new Miloli’i-Ho’opuloa Residential Subdivision, leased out by the state Department of Land and Natural Resources.

“From 1926 to 1984, fifty eight years had passed without any government resolution of that situation. And Gill was the leader that made that happen,” Carpenter said.

One of the dying wishes of state senator Gil Kahele was to sign a bill to preserve the South Kona makai lands of Kapua. The Senate Ways and Means Committee gave SB3071 SD1 their approval, and it was later passed out of the full Senate. Lawmakers were eager to advance the measure in honor of the late Hilo senator.

“As you know, members,” Ways and Means Chair Jill Tokuda said during a Feb. 4 committee hearing, “this was one of the very last bills that senator Kahele did sign. Sen. Galuteria was just showing us pictures sent to him by (kahele’s) son Kai of the senator actually signing the bill from the hospital. So that is very personal. I think all of us actually did sign that bill following his signature, as well. So we did want to make sure that we had the opportunity to quickly move his message forward this session.”

There was some debate attached to the bill. “If one person, by means of an unexploded ordnance, gets hurt… you will be responsible for that!” cautioned Uncle Joe Tassill during the hearing. Tassill and others believe the Kapua area is littered with UXO from past military training in the area.

“If there is unexploded ordnance, why would we want to find out?” Sen. Galuteria asked Tassill. “This legislation allows us to find that out. Without legislation, we wouldn’t be able to search.”

“These questions are good,” Galuteria said. “The information that you bring forward is necessary for us to move forward. But without this legislation, we would never have known. You would never be sitting in front of us. Now we know. So are you suggesting that we go back to square one, and do nothing? And allow for the same historical precedent to be set, which is nothing? This allows us to look into what you’re talking about.”

As of February 19, SB3071 SD1 passed first reading in the state house and was assigned to committees.

SB3071 SD1 – RELATING TO THE ACQUISITION OF MAKAI LANDS OF KAPUA IN SOUTH KONA ON THE ISLAND OF HAWAII.

According to the senate committee report, the new senate draft removes specific references to The Resort Group and directing the Department of Land and Natural Resources to negotiate with the current owners of the makai lands, clarifies the appropriate tax map key numbers as well as the term “acquire”, requires DLNR to report on the status of the negotiations, and removes the allocation of transient accommodations tax revenues for the purchase.

The senate draft also appropriates $500,000 to DLNR so the department can conduct “due diligence on the makai lands, to include but not be limited to a determination of the likelihood that unexploded ordnances exist on any of the parcels of land.”

The son of Gil Kahele, Kaiali’i, has taken over the 1st district senate seat, and will be at the table as this and other “final Kahele bills” move forward in the legislative session. 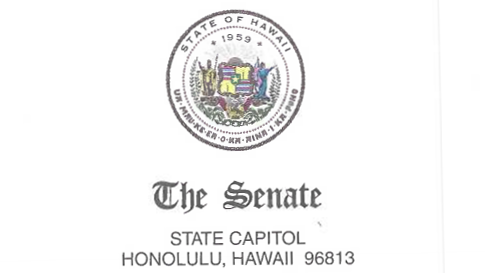 HONOLULU, Hawai‘i (Feb. 8, 2016) – Senate Bill 3071, which calls for the state to purchase land at Kapua in South Kona on Hawai‘i Island, is poised for a final vote by the full Senate this week.

The bill proposes that the Department of Land and Natural Resources (DLNR), in consultation with the Trust for Public Land (TPL), engage in negotiations to acquire certain lands located at Kapua. The proposed acquisition comprises four parcels that cover over 7,780 acres of land within the Agricultural and Conservation State Land Use Districts. It includes two parcels that are adjacent to the Manukā Natural Area Reserve. Funds would be appropriated to conduct an environmental study of the makai lands and the DLNR would be directed to attempt to reach an agreement for acquisition of the lands by December 31, 2016.

SB3071 is one of three bills that the late State Senator Gil Kahele signed hours before his death on January 26. The measure was particularly important to the late Senator, who grew up in the area and wanted to ensure the site was protected from development and preserved for future generations.

The bill passed second reading on February 5, 2016 and is scheduled for third reading before the full Senate on Tuesday, February 9, 2016.