HAWAII ISLAND – On Wednesday, the Hawaii Department of Health identified 1 new case of dengue fever, bringing the total number of confirmed cases on Hawaii Island since the outbreak began in September 2015 to 260. However, the health department says none of the confirmed cases is potentially infectious to mosquitoes. A new dengue fever […] 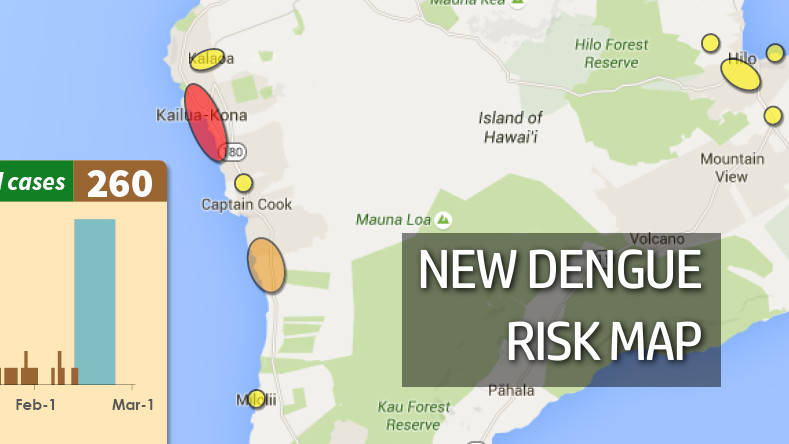 Inset of the Feb. 24 dengue fever risk map by DOH, full map below.

HAWAII ISLAND – On Wednesday, the Hawaii Department of Health identified 1 new case of dengue fever, bringing the total number of confirmed cases on Hawaii Island since the outbreak began in September 2015 to 260. However, the health department says none of the confirmed cases is potentially infectious to mosquitoes.

A new dengue fever risk map was also published by the state today. Kailua-Kona remains in the red, designated as a “high risk” zone for contracting dengue from mosquitoes. An area of South Kona to the south is orange, or a “moderate risk”, and numerous other spots on the Big Island are yellow, or “low risk”. 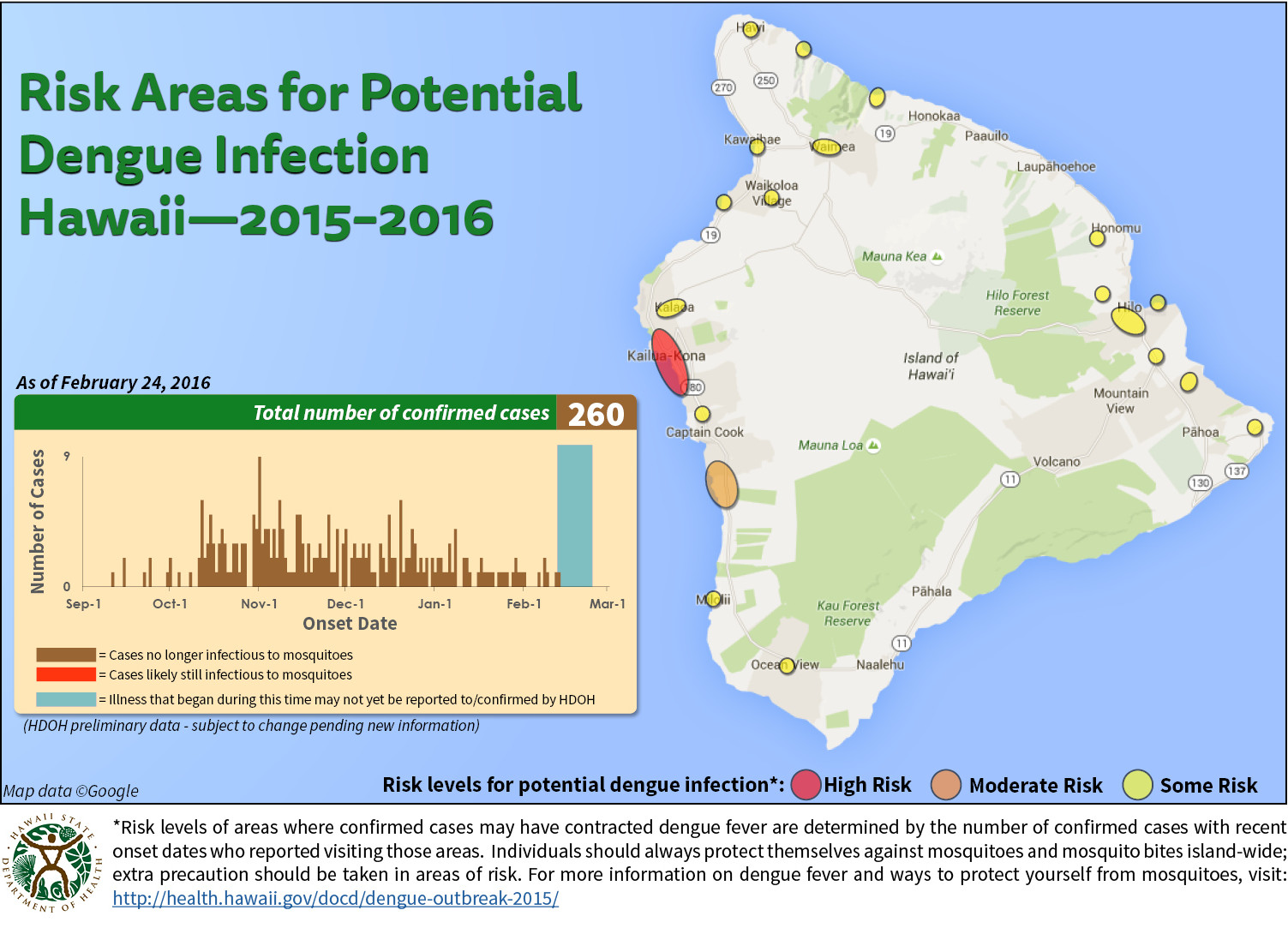 As of today, a total of 1313 reported potential cases have been excluded based on test results and/or not meeting case criteria.

Meanwhile, the Department of Health is gearing up for Zika Virus testing at the state laboratory, a sickness that is carried by the same mosquitoes that can carry dengue. DOH issued this media release earlier today.

“Hawaii is fortunate to have an experienced and capable public health laboratory that can serve our state with timely and quality testing under emergency conditions,” said Health Director Dr. Virginia Pressler. “That same capability is not available in many other areas of the Pacific, and providing lab support to these areas, when we can, is critical to controlling the spread of diseases and reducing the risk of introduction to Hawaii.”

“It’s always a balance to ensure our state needs are met first, but the staff here is more than willing to step up to support national efforts,” said State Laboratories Director Dr. Christian Whelen. “This work helps to better prepare us for potential issues that could arise in our state, and identifying and controlling outbreaks in the Pacific benefits all of us.”

While PCR is the best test during early onset of symptoms, testing for antibody to the viruses is preferred after about a week of illness. CDC is shipping antibody test materials to Hawaii so that the department’s State Laboratories Division can establish these capabilities over the next few weeks.

“The testing is very similar to the methodology our labs use for other RNA viruses such as Chikungunya, dengue, influenza, and measles,” added Whelen. “Our laboratory staff have been thoroughly trained to safely work with high risk specimens.”

DOH continues to work with the healthcare community, state, county, and federal officials to prepare for infectious diseases that threaten Hawaii and the Pacific. The State Laboratories Division administers a statewide laboratories program which conducts and regulates scientific analysis in support of environmental quality, health and safety, and infectious disease monitoring and control activities.