HILO: The UH lecture hall was packed with interested participants eager to unite and rebuild a Nation, just two days after several Hawaiians were arrested at the entrance gate to the Na'i Aupuni ʻaha on Oahu.

The UH lecture hall was packed with interested participants eager to unite and rebuild a Nation, just two days after several Hawaiians were arrested at the entrance gate to the Na’i Aupuni ʻaha on Oahu.

Only official participants are allowed into the Na’i Aupuni ʻaha. They are those who were previously candidates for delegate to the ʻaha before the U.S. Supreme Court put a stop to the race based election. The restricted gathering – supported by Office of Hawaiian Affairs grant funds – is currently drafting governing documents. Participants appear divided between those who want complete Independence from the United States and others who want Federal Recognition, or a government-to-government relationship with the U.S. similar to that of an Indian tribe.

Meanwhile, opponents of Na’i Aupuni watching the process unfold from the outside say the entire gathering is not representative of the lāhui. They are countering with an ʻaha of their own.

A coalition of 33 Kanaka Maoli community organizations and sovereignty groups are sponsoring ʻAha Aloha ʻĀina – a series of public meetings that aim to reaffirm Hawaiian Independence, reject federal recognition, and oppose the current Na’i Aupuni ‘aha being held on Oahu. 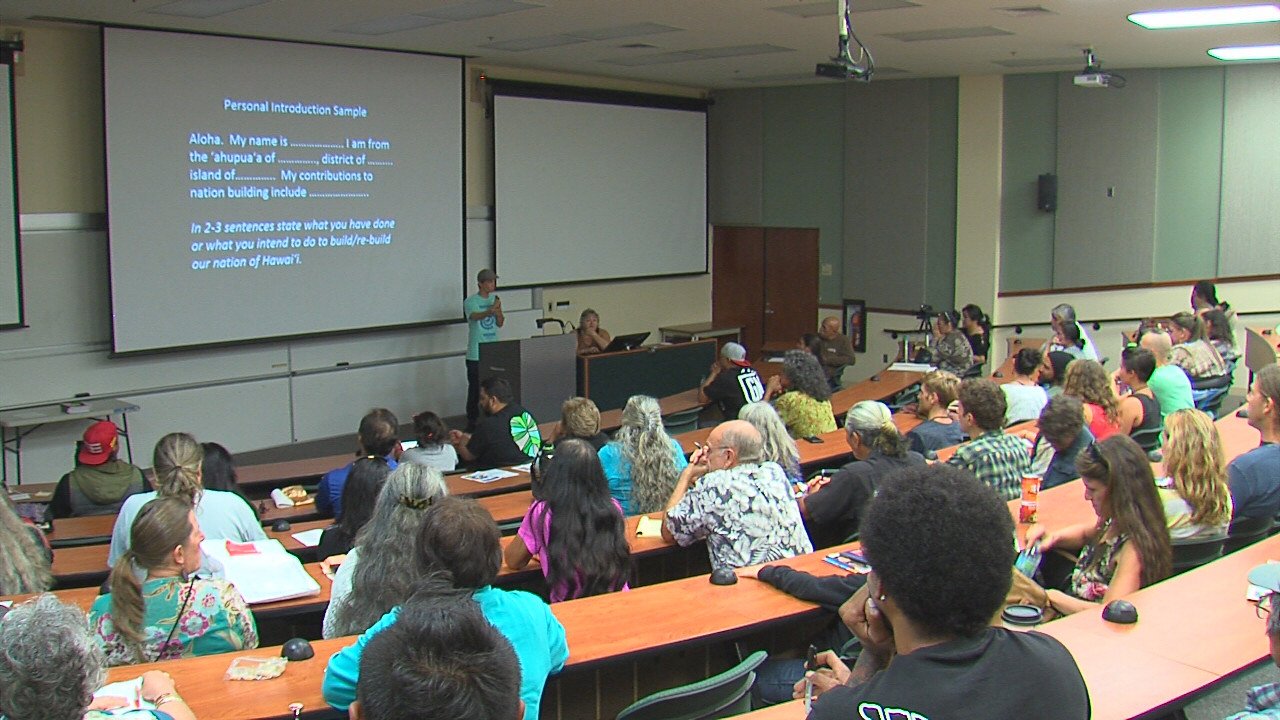 Well over a hundred people participated in the ‘Aha Aloha Aina at UH Hilo Tuesday night.

Organizers of the ʻAha Aloha ʻĀina have set up a website at ahaalohaaina.com, and shared this media release before the event:

Kanaka Maoli (Native Hawaiians) will be holding public meetings in February to discuss their political status as a people and as an occupied nation.

A coalition of 21 Native Hawaiian community organizations and sovereignty groups are holding a series of public meetings in the month of February that include three on Hawaiʻi island. This ʻAha Aloha ʻĀina series is to identify the very broad movement in the Hawaiian movement for Independence and educate the community on the various initiatives. The Na’i Aupuni ʻAha is taking place throughout the month of February in Kailua on the island of Oahu and is attempting to claim that they represent the Kanaka Maoli community when it excludes 80% of our people.

Kapu Lambert, a Hawaiian Kupuna and one of the organizers of Protest Naʻi Aupuni and ʻAha Aloha Āina 2016 says, “Our planned gatherings are a presentation of true self-determination, not State-sponsored predetermination, we are holding these meetings to determine how to unite and further the education of our people on the nation building efforts that have been ongoing since before and after the US overthrow and takeover of the Hawaiian Kingdom.”

The ʻAha Aloha ʻĀina came out of the Hālāwai Aloha ʻĀina informational community meetings that were held from October-November, 2015 statewide (see www.protestnaiaupuni.com for more information). These informational meetings, organized by Native Hawaiian community leaders, educated the public and facilitated and recorded discussions on the “State of Hawaiʻi” sponsored Naʻi Aupuni and the US DOI proposed rule changes to federalize Hawaiians. In response to the comments collected from the public, the ʻAha Aloha ʻĀina is being organized to provide an alternative to the State funded and controlled Naʻi Aupuni ʻAha, and to provide a venue for unity and nation building dialogue unhampered by any State or Federal agendas.

Dr. Kalama Niheu, a Protest Naʻi Aupuni member and the lead organizer of the ʻAha Aloha ʻĀina, stated, “Our goal is to safeguard future Kanaka Maoli rights and claims to National or Hawaiian Kingdom lands for future generations.”

Dr. Kū Kahakalau, one of the Hawaiʻi island ʻAha Aloha ʻĀina organizers, states “For me as an educator, the ʻAha Aloha ʻĀina means bringing together the many successful efforts initiated by people, organizations and communities throughout Hawaiʻi to create our own culturally-driven, family-oriented, community based, sustainability-focused system of education.”

All of the ʻAha Aloha ʻĀina community meetings planned for the islands of Oʻahu and Hawaiʻi are free and open to the public. For more information on ʻAha Aloha ʻĀina and the position of the coalition go to www.ahaalohaaina.com and check out the declaration.