HAWAII ISLAND – Drought conditions have expanded and intensified across the Hawaiian Islands during the past month, and the National Weather Service says the worst degradation occurred on the Big Island.

An “extreme drought” has developed over portions of the North Kona and South Kona districts. Forecasters say this is the first time the extreme conditions have been in the state since April 8, 2014. Meanwhile, “severe drought” has spread eastward on Hawaii Island into the lower Puna district and all of Ka’u.

In the National Drought Summary for April 5, 2016, the United States Drought Monitor said all but the northeastern tier of the Big Island is now experiencing severe drought. Increasing agricultural impact reports primarily motivated the deterioration, the Monitor stated. 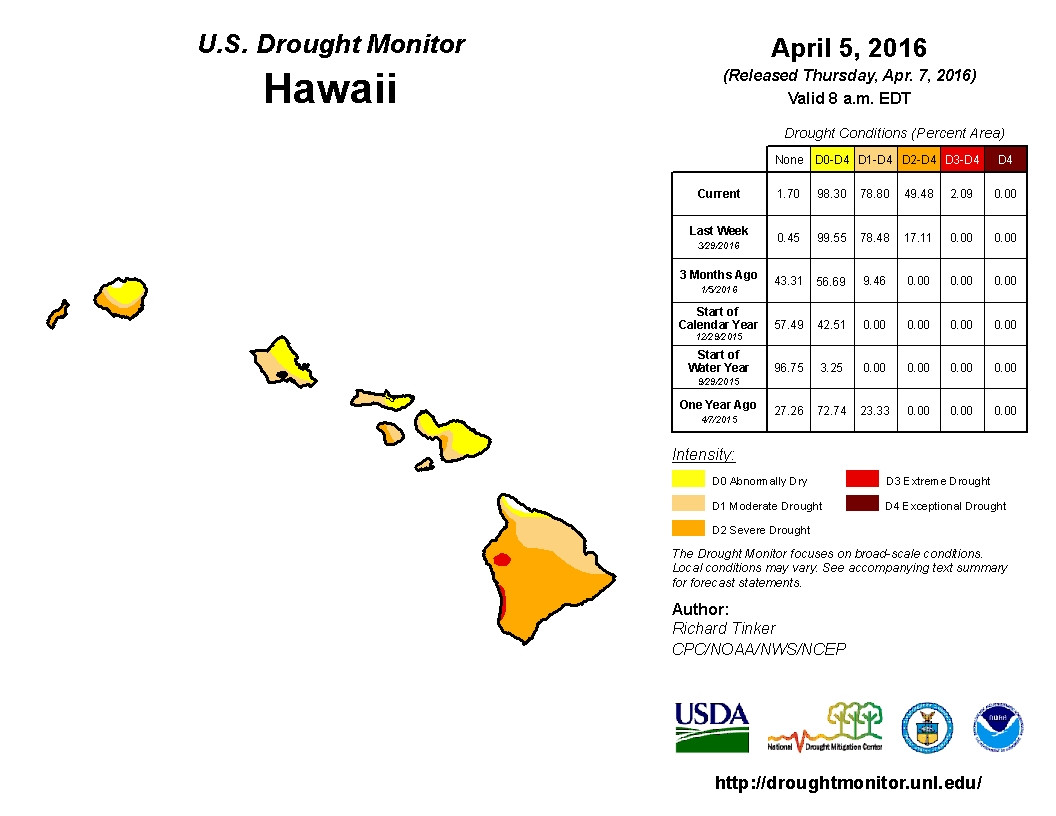 The National Weather Service detailed some of those ag impacts. Things are not looking good for Kona coffee farmers.

“Farmers on the Kona slopes of the Big Island have indicated that conditions are the worst in recent memory,” the NWS stated, “even including 2010 which was a significant drought year for the area. Kona coffee growers have indicated that the drought will adversely affect this year’s crop.”

“A rancher operating in the Waikii area reported the loss of several mature cows due to drought conditions and he has been forced to reduce the size of his herd,” forecasters report. “Feral pigs and goats have been moving onto ranch lands seeking out water and causing damage to fences in the process.”

There are troubling reports even in the normally wet Hilo and Puna districts. “A rancher near Pahoa reported selling 20 percent of his herd due to poor pasture conditions,” the National Weather Service reported. “Another rancher who works on the upper slopes of the South Hilo district reported the loss of 28 cows due to the lack of rain and the poor forage. In upper Hilo town, an aquaculture operation lost sturgeon because of low stream flow conditions.”

Its too soon to say how much of an impact the heavy rain event in late-March may have had on easing drought conditions, if any. “Rainfall intensities were high and most of the water likely became runoff rather than percolating significantly into the ground,” forecasters said. “Dry conditions subsequent to the flooding along with strong winds in a cooler and drier airmass were not favorable factors for substantial easing.”

El Niño conditions are present in the Pacific Ocean, and forecasters say that – according to the NOAA Climate Prediction Center – El Niño is weakening, “and will likely transition to enso-neutral conditions during the late spring or early summer of 2016… With a possible transition to La Niña conditions in the fall.”