Over the course of two days, the hopeful Pepeekeo power producer filed a pleading with regulators, issued two media releases, and held a press conference at the site of the project.

PEPE’EKEO, Hawaii – Officials and supporters of the resurrected Hu Honua Bioenergy project took part in a press conference on Friday morning, part of a two day blitz of media releases and filings with the Hawaii Public Utilities Commission. The message was clear: the Hawaii Electric Light Company should be investigated for its cancellation of a Power Purchase Agreement with Hu Honua, even as the bioenergy company negotiates with the utility to sell it 30 MW of “clean renewable baseload power”.

On March 1, HELCO terminated its agreement with Hu Honua, following what the utility said were missed milestone schedule dates.

Hu Honua Bioenergy is trying to refurbish the former sugar mill power plant at Pepeekeo, transforming it into a modern biomass electricity generation facility with advanced emission control equipment. A Power Purchase Agreement with HELCO was approved by the PUC in December 2013, but since then Hu Honua spent months mired in litigation with previous contractor, Hawaiian Dredging Construction Company. HELCO cited missed deadlines in its decision to terminate the agreement, and said it does not appear as if Hu Honua will achieve commercial operations in the near future. HELCO even said they have no confidence Hu Honua “is being forthright in its disclosures to Company and/or that Seller has a sound business plan in place that is in the best interest of customers and makes sense financially for Seller’s investors.”

Hu Honua Bioenergy rebounded in April, announcing the addition of three prominent Honolulu business leaders to its lineup, even though the company no longer has an agreement with the utility to sell the energy it plans to produce. Investors committed $125 million to complete work on the plant.

Although the PPA was terminated, HELCO president Jay Ignacio said at the time that “we are open to discussing but have made it clear that Hu Honua would need to address our concerns about their ability to complete the project and that they provide enhanced terms that benefit our customers.” 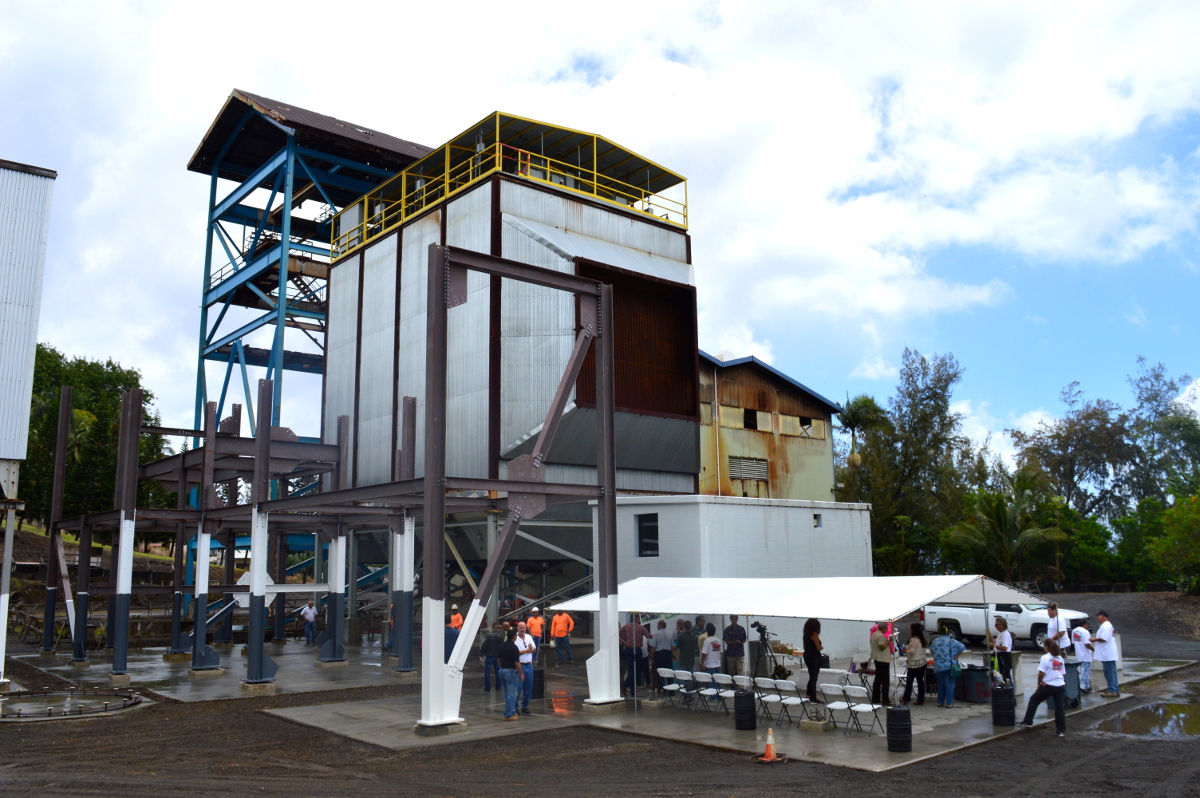 On May 19, Hu Honua took a more aggressive approach.

This media release was issued on May 19 through the Honolulu-based Anthology group:

Specifically, Hu Honua asked the Commission to investigate HELCO and HECO for (1) refusal over the past 14 months to provide Hu Honua with reasonable milestone extensions to construct its plant, (2) their improper attempt to terminate Hu Honua’s Commission-approved PPA, which will deprive ratepayers of renewable power de- linked from volatile fossil fuel prices, and (3) claims that Hu Honua’s proposed pricing concessions provide no benefit to consumers, despite failing to provide any analysis, explanation or facts to support those claims.

When Hu Honua’s PPA docket was reopened in February 2016 and information was submitted by the utility, the Division of Consumer Advocacy and Hu Honua, HELCO, without waiting for the Commission to act on these submissions, terminated the Hu Honua PPA on March 1.

On the heels of the attempted termination of Hu Honua’s PPA, HELCO filed an updated power supply improvement plan on April 1, 2016, proposing a HELCO-owned 20 MW biomass power plant on Hawaii Island with an estimated completion date in either 2024 or 2027. Had we not had these issues with the PPA, Hu Honua’s biomass facility could have been completed and operational by mid-2017. HELCO has failed to tell the PUC how the community HELCO serves on Hawaii benefits from HELCO’s effort to prevent the completion of Hu Honua’s facility in favor of its own biomass power plant that won’t be built for a decade.

Principal Investor Jenny Johnson noted, “Instead of allowing our renewable energy plant to be completed and come on line in 2017, HELCO has chosen to continue operating its power plants that burn lower grade fuel oil and produce higher levels of pollution. Although these plants exceed federal Mercury and Air Toxics Standards (MATS), they are not subject to these standards because each plant produces less than 25 MW of power. Combined, they total about 50 MW of dirty energy. Choosing the old plants over Hu Honua is clearly not in the best interest of the residents of East Hawaii.”

In both its February 16 Status Update to the Commission and its March 1 termination letter to Hu Honua, HELCO failed to identify a single fact to support its oft-repeated claim that the attempted termination would be beneficial to its customers and elected not to share with the Commission the following undisputed facts:
The Hu Honua project is approximately 50 percent complete ($137 million to date), has $125 million of capital committed to the completion of the facility, and can be ready to begin operations within14 months.

When completed, the Hu Honua project will offer HELCO’s customers all of the benefits identified by the Commission, including protection from volatility in the cost of electricity, with oil prices currently rising the past three months, and a modernized plant providing firm power that would help stop the power outages being experienced on Hawaii Island.

Throughout 2015, Hu Honua proposed, and continues to propose, a pricing concession that would reduce the fuel component of Hu Honua’s pricing formula to a flat rate of 14 cents per KWh at dispatch levels above 10 MW. Hu Honua calculates that this price reduction would result in additional customer savings of approximately $60 million over the 20-year life of the PPA, as compared to the previous Commission-approved pricing and dispatch levels provided by HELCO in the PPA application.

In attempting to show that Hu Honua’s price reduction proposal did not benefit its customers, HELCO’s Status Update to the Commission analyzed the wrong pricing proposal. And although Hu Honua’s response to HELCO made the utility aware that it had used the wrong pricing proposal, in its subsequent correspondence filed with the Commission, HELCO failed to correct its pricing analysis error and never informed the Commission about Hu Honua’s proposed reduced pricing and the significant customer benefits that would be realized.

Johnson added, “Yesterday, we submitted our latest pricing proposal to HELCO and are proud that the energy price we presented, if approved, would be the lowest of any renewable facility in the state. We are hopeful that the PUC will support us.”

The next day, Hu Honua officials held a press conference at the site of the planned Pepeekeo power plant.

This media release was also issued, this time through the Hawaii Island-based Hastings & Pleadwell firm:

(PEPEEKEO, HAWAII, MAY 20, 2016)—More than 30 Hawaii Island officials in government and labor gathered this morning at Hu Honua Bioenergy (HHB) in Pepeekeo for a briefing on the biomass project’s status.

Robinson, a member of Hu Honua’s board of managers, and president of Island Bioenergy, the parent of HHB, said for more than a year, HELCO delayed meaningful response to Hu Honua’s repeated requests for milestone extensions and reduced pricing proposals.

“We have provided the utility with a pricing proposal that significantly reduces HELCO’s costs,” said Robinson. “More importantly, we believe Hu Honua will provide a hedge against rising oil prices, which have historically whipsawed Hawaii Island consumers.”

Hu Honua has invested $137 million to date in the biomass-to-energy facility and has secured an additional $125 million to complete the project. All that’s needed is an extension of the PPA, which Robinson said, we are trying to negotiate with HELCO but are concerned they are stalling a decision.

“The public should know that despite what HELCO claims, Hu Honua’s proposals will deliver value to ratepayers,” said Robinson. “Our project will have more than 200 workers on site during construction. After completion, the community will benefit from more than 180 new jobs and the formation of an invigorated forestry industry. There will also be environmental benefits when old HELCO power plants are deactivated and replaced with renewable energy from Hu Honua in 2017.”

During the conference, various government officials expressed support for the project and welcomed the creation of additional jobs and industry for Hawaii Island. Many were hopeful that the utility would work with Hu Honua to amend its PPA.

Valerie Poindexter, Hawaii County councilmember for the district, talked about growing up in a sugar plantation camp and the demise of the island’s sugar industry. “Hu Honua would revitalize the culture and lifestyle of the sugar days, and create jobs so people don’t have to travel so far to work.”

State Senator Kaialii Kahele touched on the importance of energy security. “If a catastrophic event happens on the West Coast, we’re stuck because we are out here in the middle Pacific, heavily reliant on fossil fuels and food imports. We must come up with creative solutions to address those issues,” said Kahele. He stressed that while he welcomed mainland investment, any and all development must be done the pono way, and commended Hu Honua’s new collaborative, collective style of leadership.

Robinson explained that significant investment made in emissions control equipment, including a new turbine generator, will result in increased efficiencies, generating capacity and cleaner emissions.

Following the event, Robinson addressed a statement issued by Hawaii Electric Light Company that criticized Hu Honua. “The utility’s reference to the cost of the project is a smokescreen. When a utility builds a power plant, that cost is passed to ratepayers. This is not the case for us. We decided to invest in increasing generation capacity from 21 to 36 megawatts, but that has no impact on the price to consumers or the ratepayer. The financial risk of the project cost is ours,” he said.

Big Island Video News will have more on this story.