KONA (BIVN) - After analyzing the response to the proposed 10-year rest period at Ka‘ūpūlehu, the land board is being urged to approve the new rules at its May 27 meeting on Oahu.

HONOLULU, Hawaii – The Hawaii Board of Land and Natural Resources will consider granting final approval to new rules that would establish the Ka‘ūpūlehu Marine Reserve, putting into place a 10-year rest period in the hopes nearshore fishery stocks will be replenished.

Dr. Bruce Anderson, the administrator of the DLNR Division of Aquatic Resources, told a crowd assembled for a legislative talk story at the West Hawaii Civic Center a few weeks ago that he personally has seen the changes that have occurred in the area over time. “It really is an area that has degraded significantly since they put in Queen K Highway,” he said. “You’re seeing a lot of fishing pressure along that whole coastline.”

The Ka‘ūpūlehu Marine Reserve will prohibit the use of fishing gear and the take of marine life for an entire decade, with limited exceptions to allow for the continued harvest of certain pelagic and deep benthic species using certain gear. 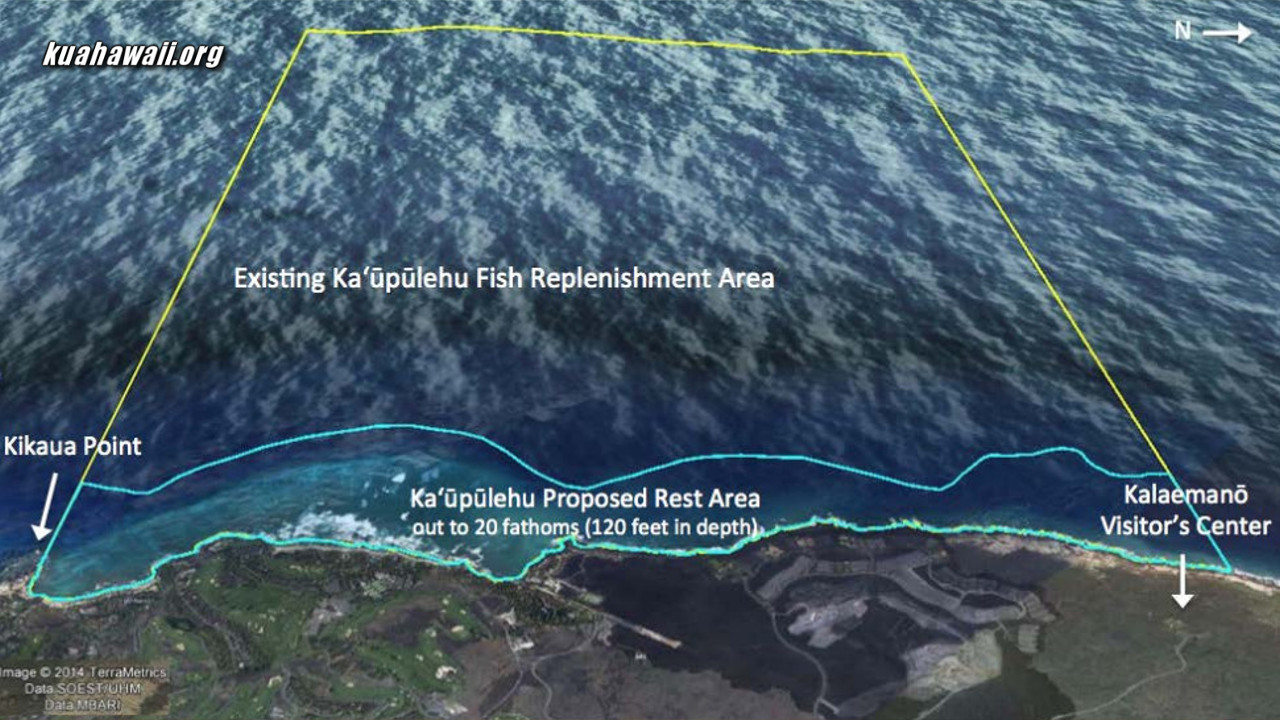 On February 11, a combined public informational meeting and formal public rulemaking hearing was held in Kealakehe. A large number of testifiers showed up wearing “Try Wait” shirts, supporting the Ka‘ūpūlehu Marine Reserve proposal. But the support was far from unanimous, as DLNR analysis of the oral and written feedback shows.

There was overwhelming support for the proposal at the public hearing. Many testimonies in support of the proposal came from kama‘aina families with generational ties to the Ka‘ūpūlehu area, who had witnessed first-hand the decline in ocean resources since the area began being developed. Other supporting testimony was provided by marine scientists who pointed to scientific studies that showed the decline in target fish species in the Ka‘ūpūlehu area and the effectiveness of similar no take areas in other places to restore fish populations. Opposition testimony came primarily from fishermen from other parts of the island who fished in the area. These fishers pointed to pollution, runoff, invasive species, and other factors to blame for the decline in fish abundance. Some suggested that 10 years was too long,
and that the area should be evaluated in 5 years.

The majority (70%) of the written testimony was in support of the proposal.

Supporting testimony came from local families with generational ties to Ka‘ūpūlehu, residents of neighboring communities and throughout the state who supported the community’s efforts, marine scientists involved in conducting surveys of the area, and organizations such as The Nature Conservancy, Big Island Divers, Kamehameha Schools, the Puako Community Association, and the Office of Hawaiian Affairs.

There were a significant amount of written testimonies (124) opposing the proposal. 117 of these (94%) were identical form letters. 7 individuals submitted personalized testimony explaining their Opposition to the proposal. Most cited other factors such as invasive species, sedimentation, and chemical contamination as causes of the decline in resources. One denied that resources were in decline. Some were in favor of other forms of management, such as better bag and size limits and more enforcement, but opposed to a complete closure. Some questioned the state’s motives for the closure or the scientific justification for the proposal.

The DLNR is recommending that the land board approve the new rules.